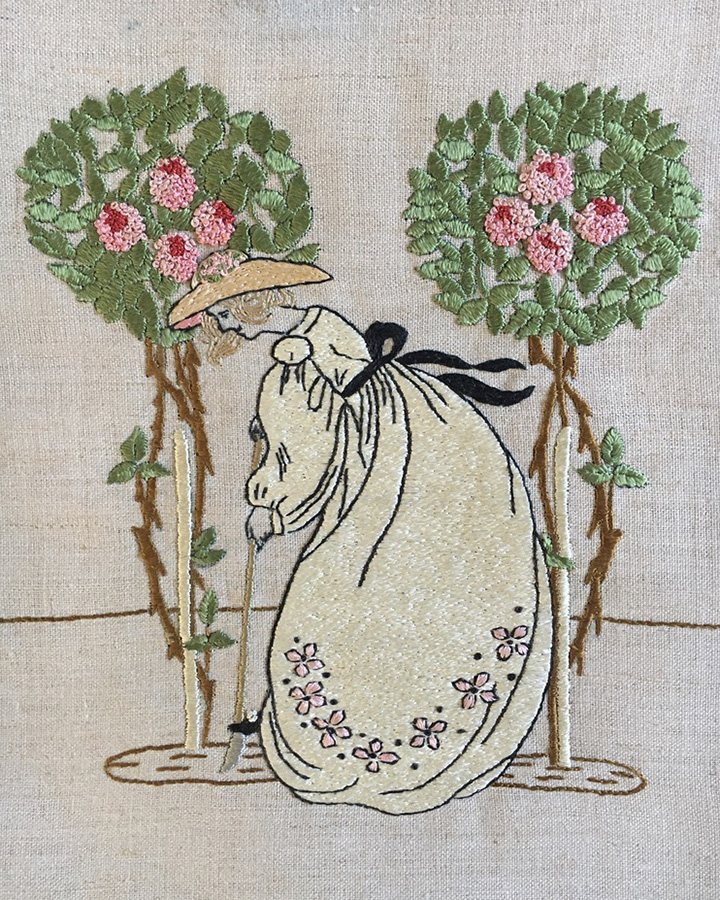 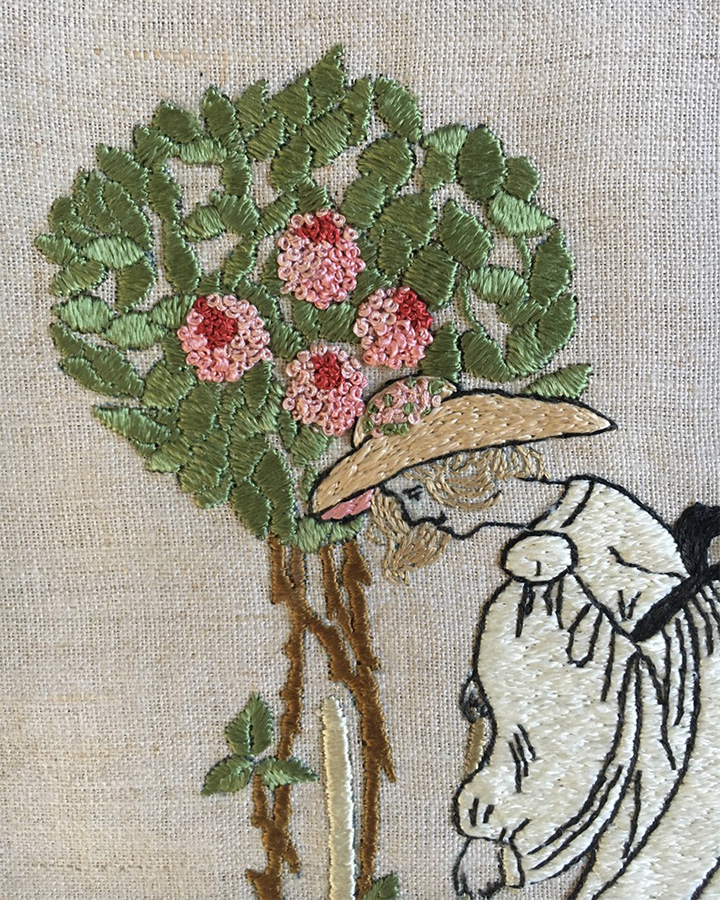 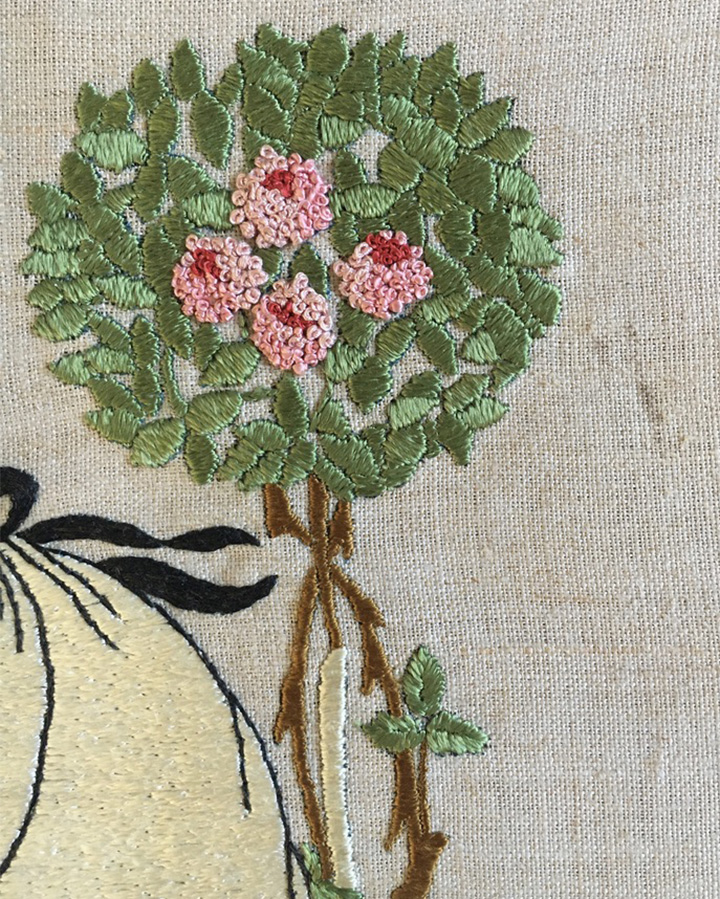 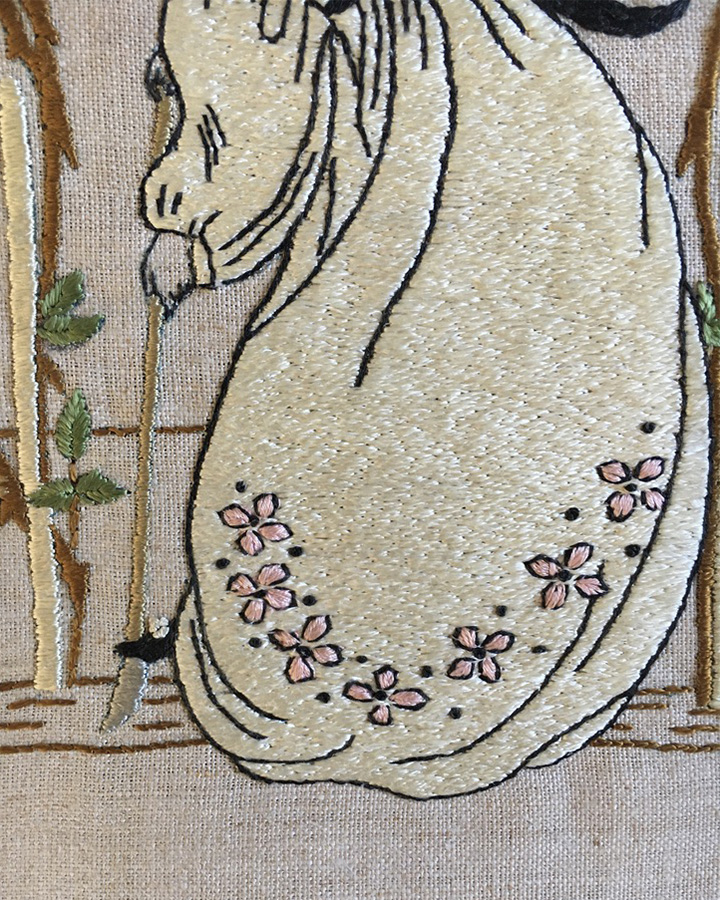 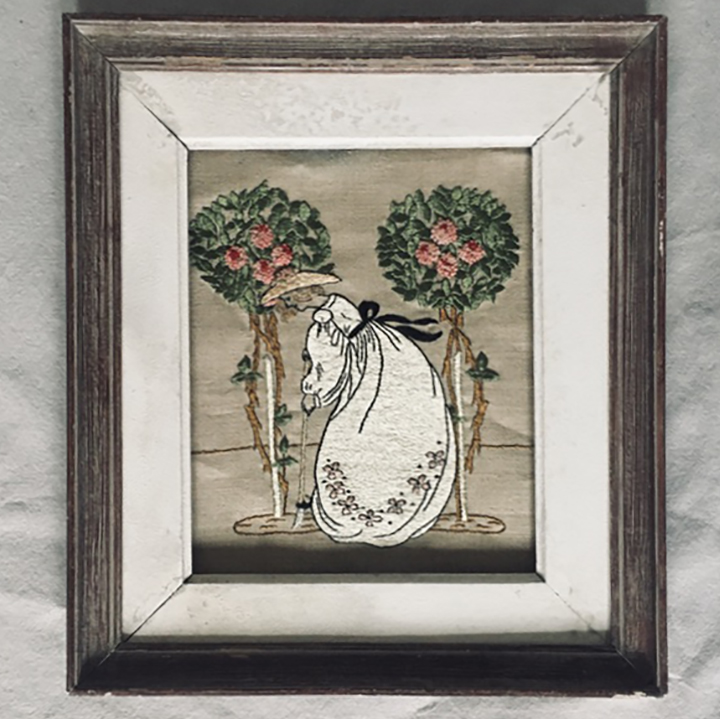 Ann Macbeth (1875-1948) was born in Bolton, Lancashire. She enrolled at the Glasgow School of Art in 1897, two years later won a prize for needlework and in 1901 was appointed assistant to Jessie Newbery. Known as a Glasgow Girl. She took charge of the embroidery classes at the School of Art in 1908. 1912 she became the Director of Studies in the Needlework-Decorative Arts Studio. Her work was highly regarded and publication in contemporary magazines included an appreciation by Francis Newbery in The Studio in 1902.

Macbeth also taught metalwork, bookbinding and ceramics and, as a freelance artist, produced designs for jewellery, carpets and textiles. Her book Educational Needlecraft (1911), written with educational psychologist Margaret Swanson, revolutionized teaching of embroidery in schools.  It based its exercises on the developing co-ordination and eyesight of children whilst fostering originality and innovation. It remained on the Scottish school curiculum until 1950s.  She also wrote Needleweaving (1922), Embroidered Lace and Leatherwork (1924), and Countrywomans Rug Book (1926).

Ann Macbeth was also an active suffragette and designed banners for suffragists and suffragettes movements.

In the 1912-3  in Liberty's Yule Tide Gifts catalogue I found similar designs with two additional trees to the sides. There is also a nightdress case and lampshade which have a central tree but not quite the same design.

In Liberty's 1875-1975 :  Liberty's greatest triumph in those early days came from a co-operation with Thomas Wardle, the dyers and printers of Leek in Staffordshire, who also worked for William Morris. Between them, Liberty and Wardle introduced dyes which had until then been supposed to be a closely guarded secret of the East....delicate pastel tints which they called 'Art Colours', described all over the world as 'Liberty colours.' Silks in Liberty colours were an influential element in the Aesthetic Movement. Liberty's windows became one of the sites of Regent Street...a revelation to a generation accustomed to the harsh colours of aniline dyes....*

The embroidery was designed by Macbeth and could be marketed in several ways. It may have been embroidered in Scotland by one of Macbeth's professional embroideresses, using silks probably bought at a shop in 7 George Road, Glasgow, known to have stocked Wardle (Thomas) silks. It might have then been sent to Liberty's who framed and sold it. OR these pictures were sold to Liberty's to be embroidered in their workrooms and sold in the store. Or they were sold as kits, complete with the design drawn on the linen and the silks for the home embroider to produce.

The smiling young woman wearing a large straw hat with flowers and a full ivory silk dress tied with a black sash with the hem embroidered with mauve flowers, slightly stooping and digging her garden, flanked by two rose bushes with pink and red roses worked in French knots, and two shades of green leaves, a brown thorny stem emerging from the earth into the trees, all worked in thick floss silks on a linen crash or scrim ground.

Very good apart from a slight mark to the right of the tree. This could be covered by a gold slip and frame, or just a frame. Where the linen has been folded over cardboard (horrors) to put into a frame, the edges are dirty, but once re-framed this will not show. I have included what I feel is a suitable frame should you be interested.

Liberty Yule Tide Catalogues 1912-13 for similar but not same designs.