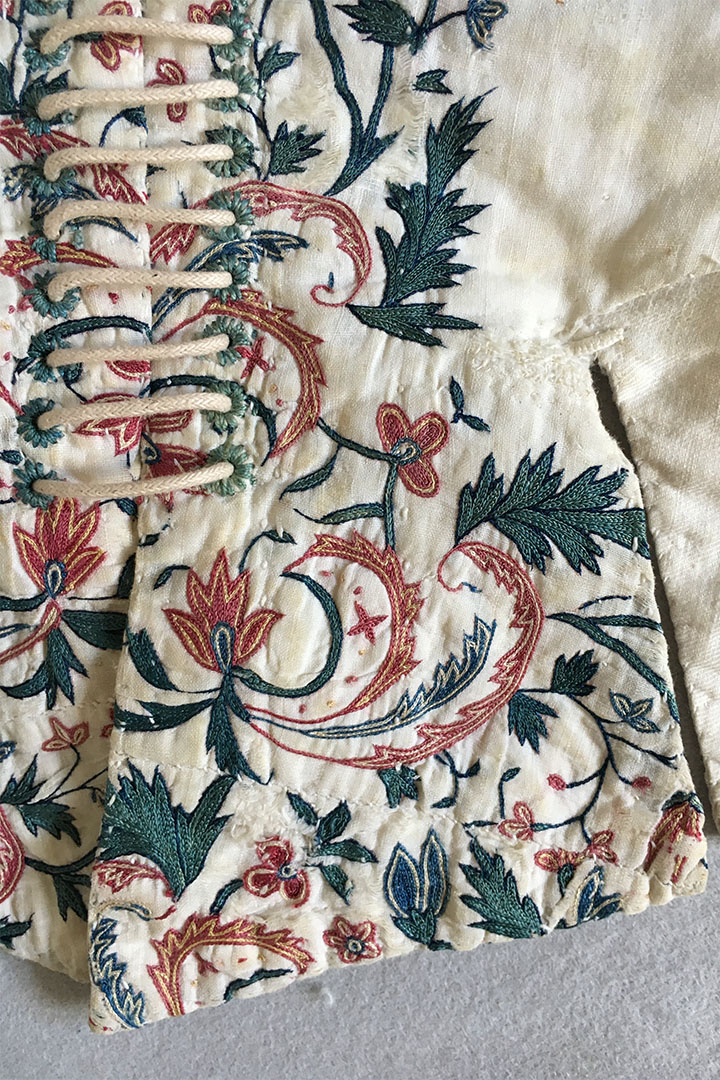 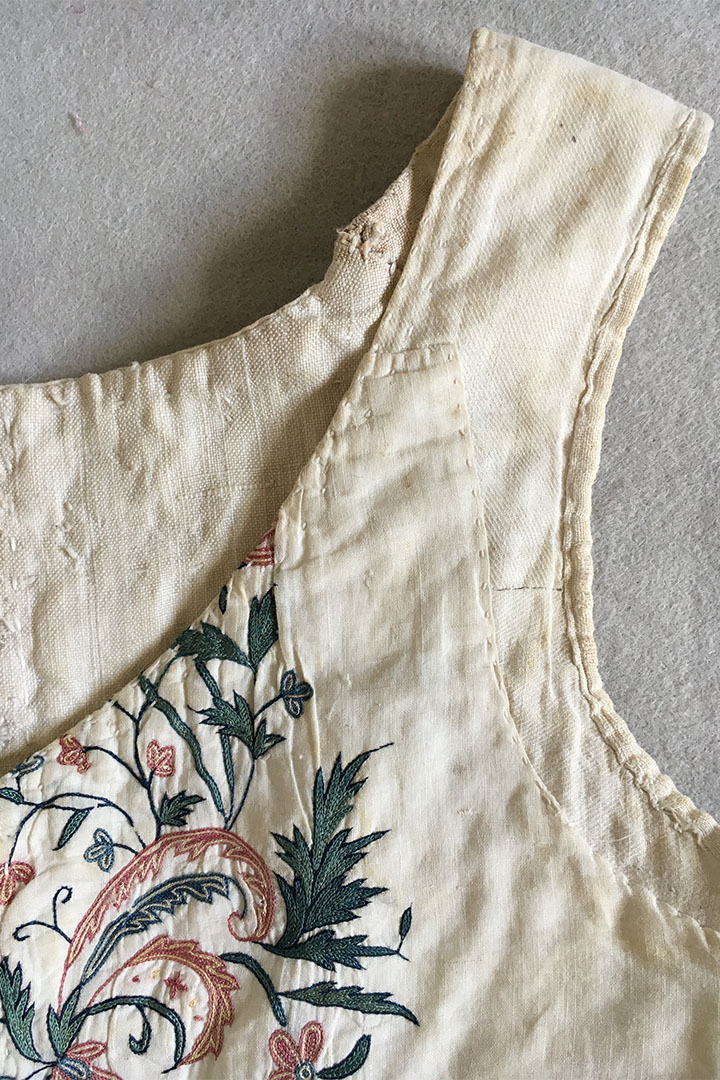 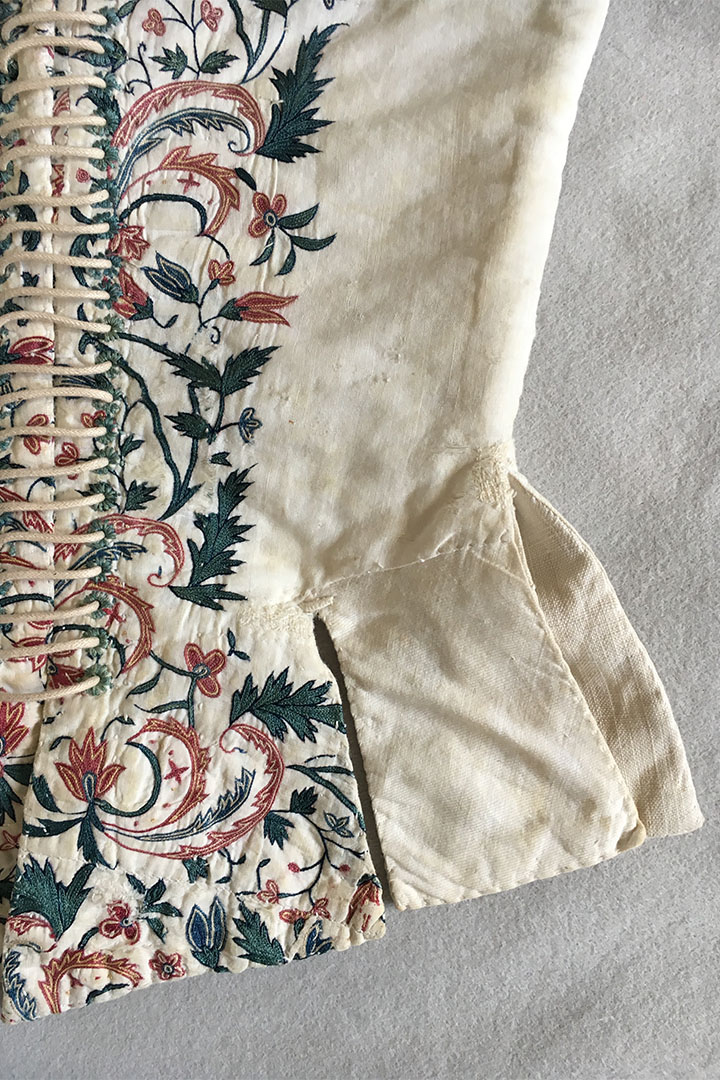 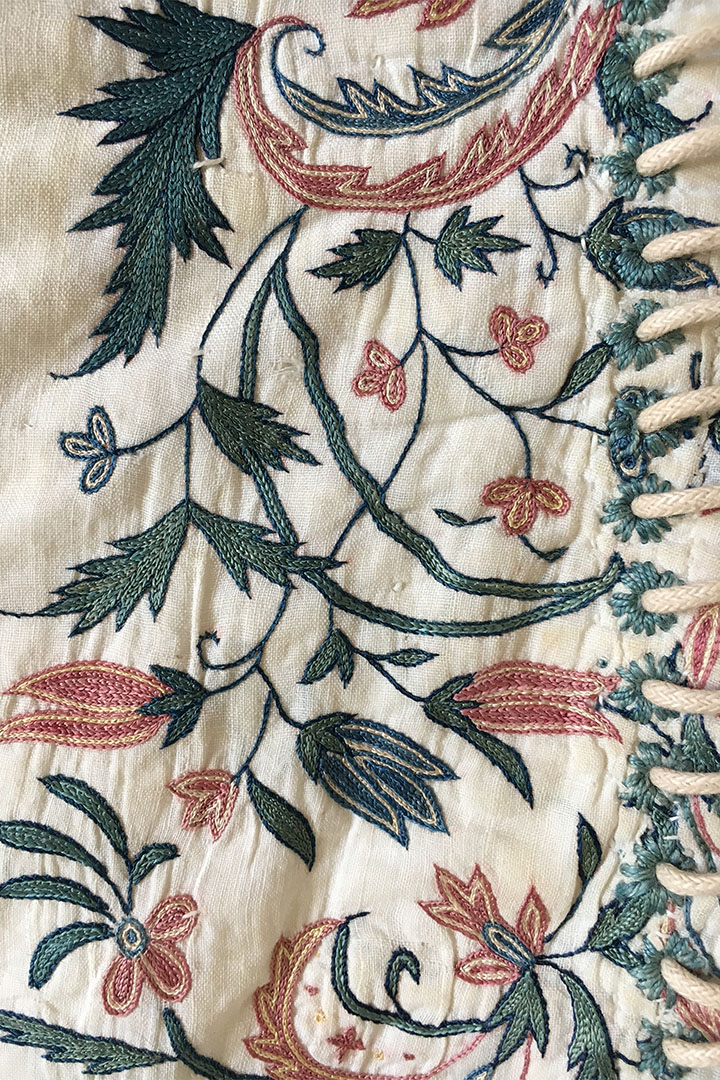 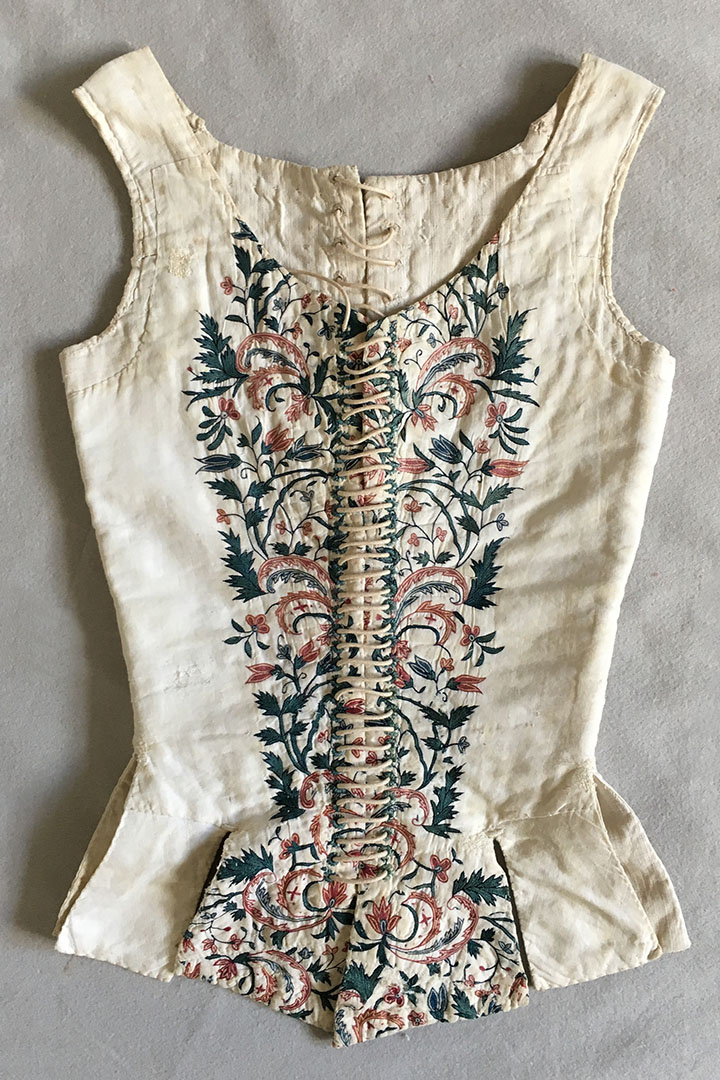 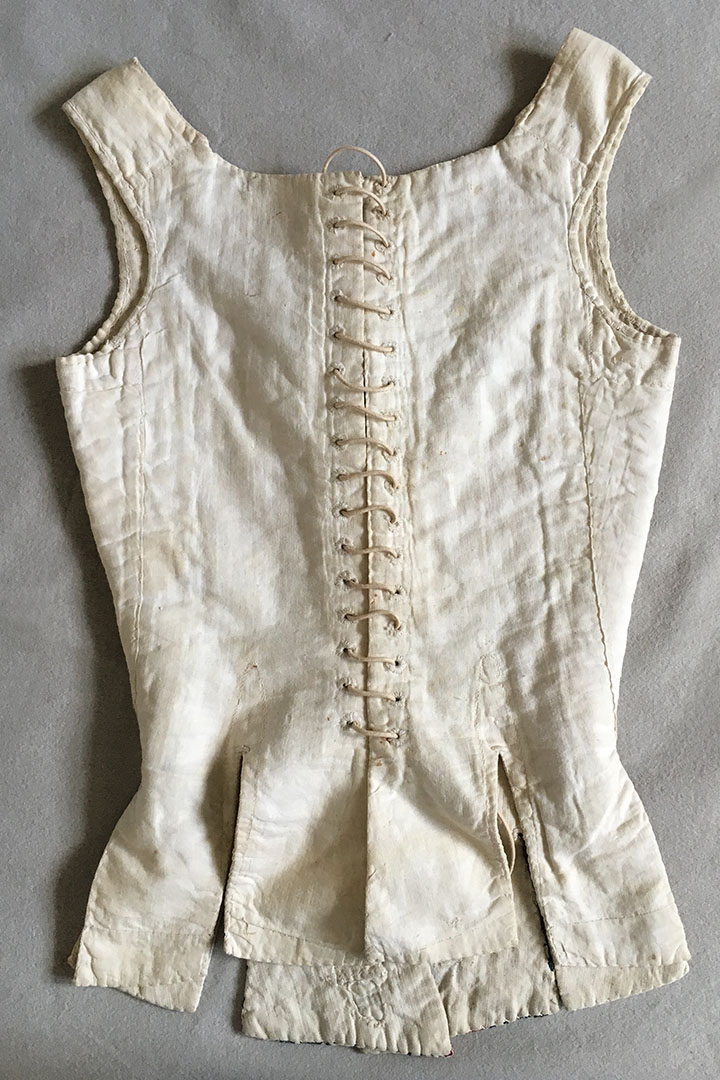 The embroidery on this rare pair of stays was worked in Cambay, north western Gujerat, India, for the export trade during the Mughal period  (1526-1858). Embroidered textiles were a highly lucrative trade for this part of India. This piece would have been embroidered in the early 18th century. In the 17th and 18th centuries trade embroideries were hugely popular in fashionable Europe. The main centre of production was in Cambay, but fine embroidery was also worked in Gujerat, in Patan and later Surat. It is now understood that these embroideries were created by the artisans of the Mochi (cobbler) caste of Gujarat who originally worked the delicate chain-stitch hook and needlework on leather and later adapted this technique on to cloth. The Mughal court also actively patronized embroidered textiles, but after the rise of European trade in the subcontinent their designs were adapted to suit the demands of Company trade. By the first quarter of the eighteenth century, the monopoly of the English East India Company in Gujarat had significantly declined, though it retained the factory in the port town of Surat on the western coast of Gujarat.

I think this may originally have been part of a gown. The embroidery had a life before this pair of stays were made, which you can see with the design going right to the edge. I love the fact it was clearly much loved and was re used. A hooked awl or ari with twisted silks created very tight chain stitches on Indian hand woven cotton. It would have been profesionally worked by men.

Bedhangings and coverlets were also worked in a similar technique.

Thought has gone into the embroidery used for these stays, with both sides matching. The flowers, apart from tulips are not recognisable. Fine floss silks have been used, many single thread.

The front panel of fine and tight embroidery in sea and blue green and madder, with touches of pale banana yellow twisted silks, with curling serated elongated madder and blue green leaves emerging from stylised tulips and other flowers, deep sea green upright leaves and small flowerheads, all on a fine hand woven cotton ground, the centre front with thirty-one hand embroidered eyelets each side, eight tabs each stregthened with stitching at the top,  the embroidered panel applied to a coarser woven cotton. The back with seventeen hand worked eyelet holes, the armholes are edged with a woven linen braid. The inside front with long pockets either side of the eyelet holes for bones whilst the side seams have double thickness cotton for stregthening, all worked in finest tambour (chain) stitch.

The embroidered front panel extends to half way up the shoulder strap and to the side seams and the first tab. The back and six other tabs are of a slightly looser woven cotton . Ask for photos. As you look at the stays you will see a darn below the shoulder strap.  Lower down there is slight wear to the plain cotton. A small darn at the junction of two tabs. There is a little wear to the embroidery just above the waist, but I needed a magnifying glass to see it!

The right hand side as you look at the stays has little areas of wear between the embroidery at same height as left hand side. Again I needed a magnifying glass.  Again a little darn at the junction of the tabs.

The shoulder straps are slightly discoloured and overall a little discoloured.