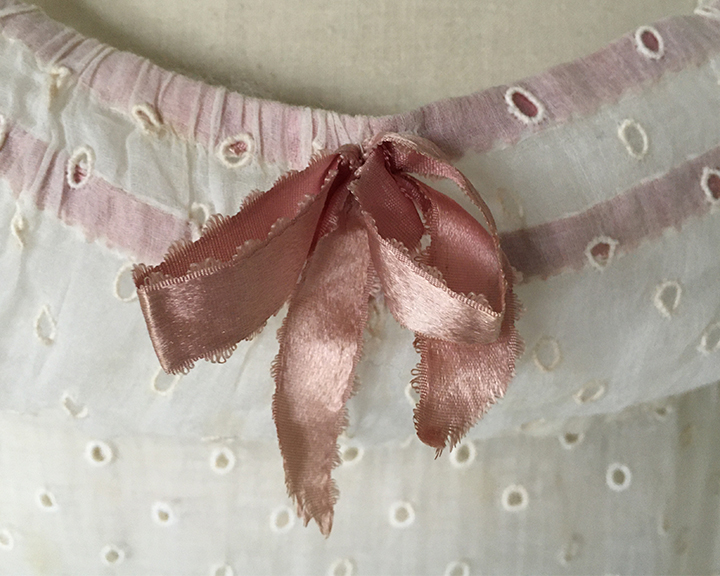 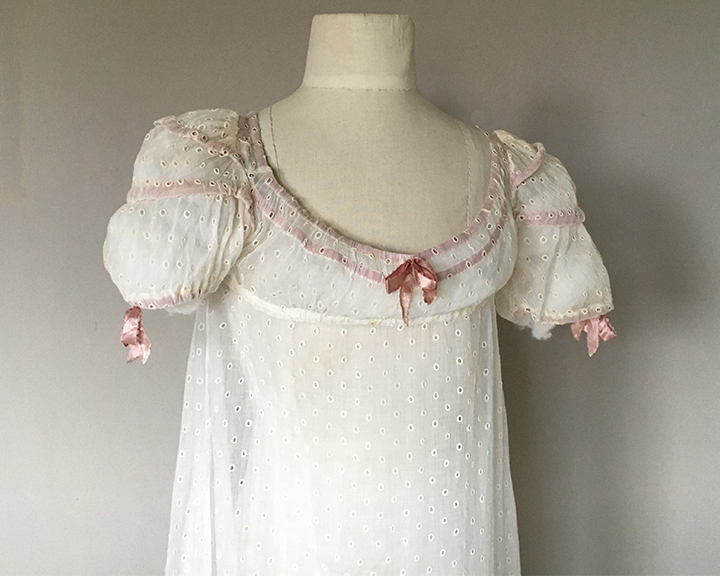 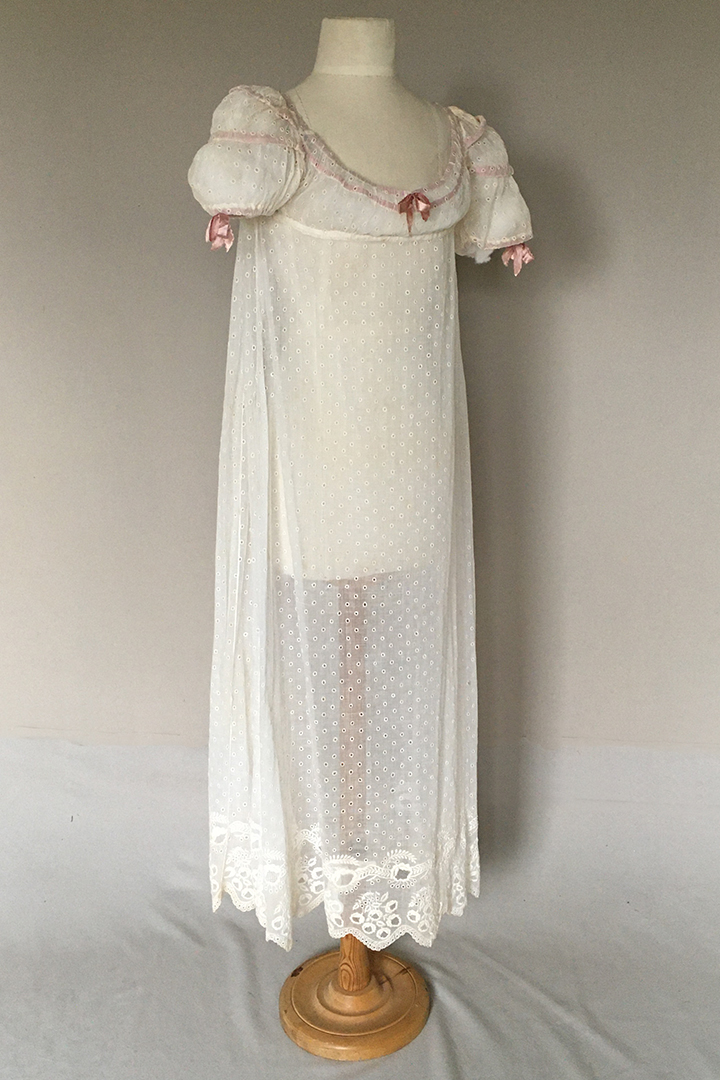 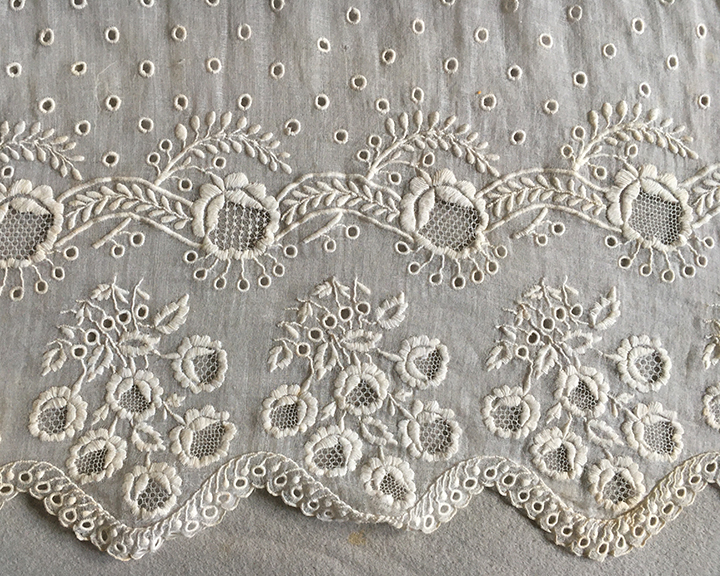 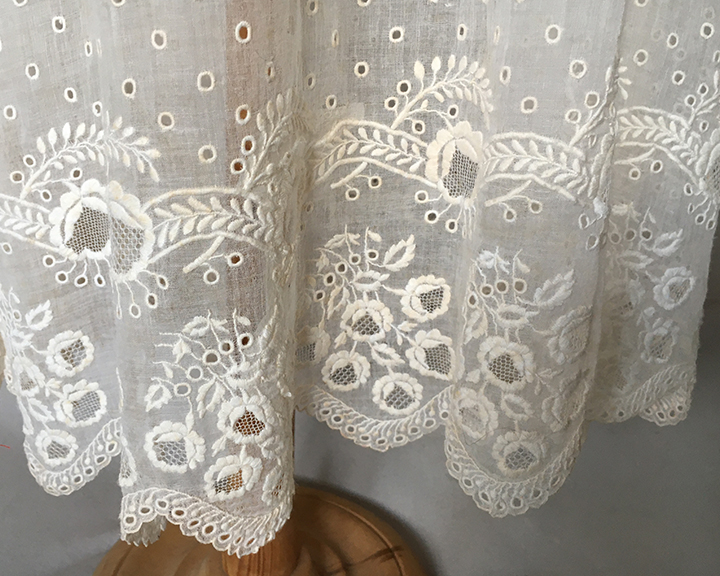 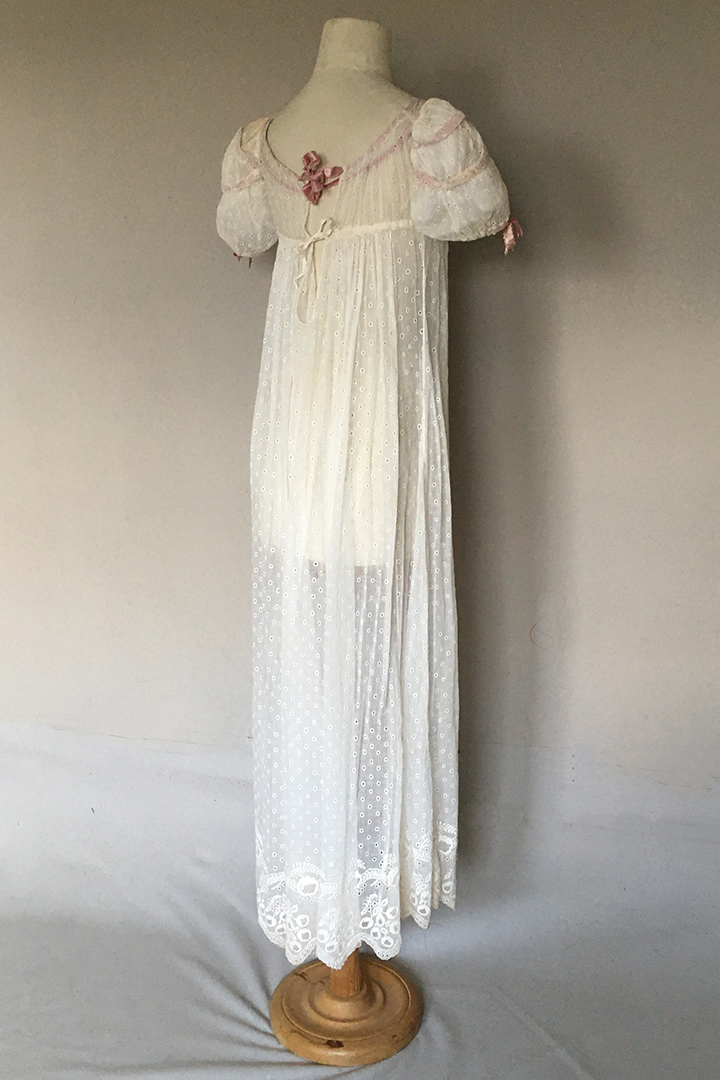 Little details on this dress are delightful. The zig zag vandyked edges to the ribbons and the hand embroidered whitework decoration - all those ovals ! The back is slightly longer than the front and would have been worn with a small bustle.

The dress was found at the former counry home of John Charles Herries (1778-1855) , St Julians, Underriver, nr Sevenoaks, Kent. He married Sarah Dorington in 1814. They had six children before his wife's early death in 1821. I think we can assume this dress was worn by one of the three daughters.  John Herries became a clerk in the House of Commons; rising eventually to the post of Chief Commissary in 1811, responsible for supplies to the army during the period of the Napoleonic wars. He went on to become an MP, retiring in 1851.

The country home was built by John Charles' father in 1836/7. Colonel John Herries (1745 - 1819),  married Mary Ann Johnson and had six children three girls Isabel Maria, Catherine  and Julia Mary . The Herries family lived in the house continuously until after the Second World War.

Jane Austen and her brother knew the Herries and attended a large family party at the home of John Charles' father in 1815.  As John Charles, lived close by, it is likely that he and his new wife would have attended the party. The party is mentioned in the book*  Jane Austen had Mrs Creed. one of Colonel Herrie's daughters visit her home. Austen maintained a friendship with Herries family.

Their famous ancestror Col Charles Herries formed the Light Horse volunteers and stopped the revoluton from spreading to England. He fought in the 1806 war of Maida and is buried in Westminster Abbey.

There was also a group of babys bonnets sold with a hand written card This baby's ....... belonged to the Herries family for many generations.  Lady Herries 1865.

The large scoop neck threaded with two rows of mauve satin ribbons under the white dress muslin, the top ribbon tied at the front, with scalloped edges, short puff sleeves also with two rows of concealed mauve satin ribbon and a similar ribbon with a bow at the lower cuff, high waist with concealed drawstring ribbon, the skirt gently flaring towards the hem, the fine muslin with hand embroidered oval whitework cotton Os,  the deep hem embroidered in whitework with sprays of flowers, with drawn work centres above a larger continuous row of flowers and sprays of leaves, vandyked hem, the back with two mauve ribbon ties above a narrow white tape high waist tie.

Very very good. Could possibly do with a wash. The concealed ribbon is achieved by the whitework muslin being turned over encasing the first ribbon closest to the scooped neck. The second ribbon  and the high waist ribbon are backed by a tape.

For a portrait of Sarah see:  www.wigsonthegreen.co.uk/portrait/sarah-herries/

*The Bankers Sister. E J Clery published  2017. The chapter where the party is mentioned is called Persuasion 1815-1816.