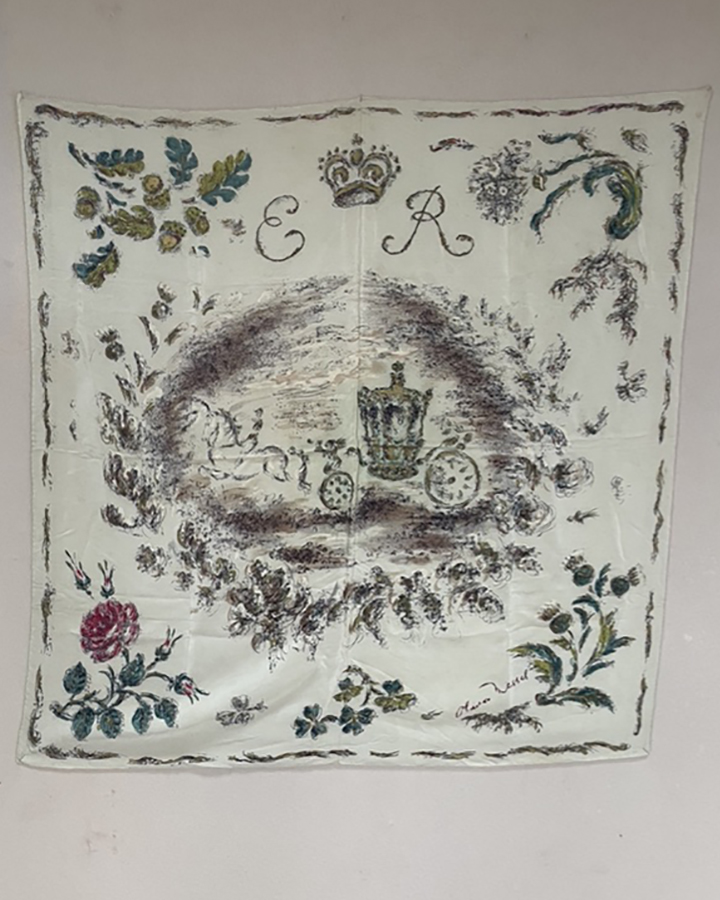 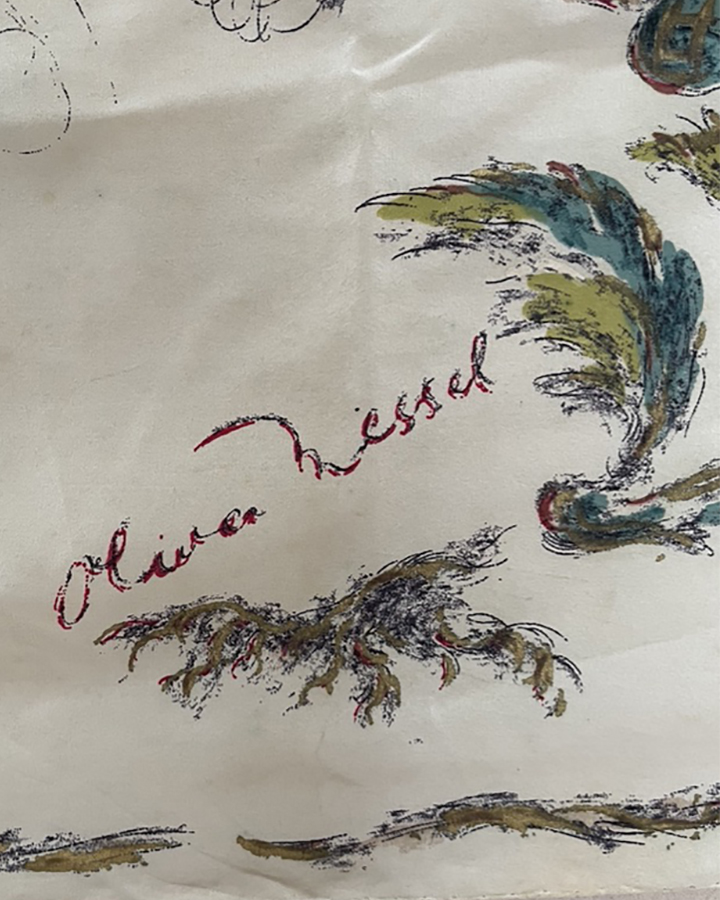 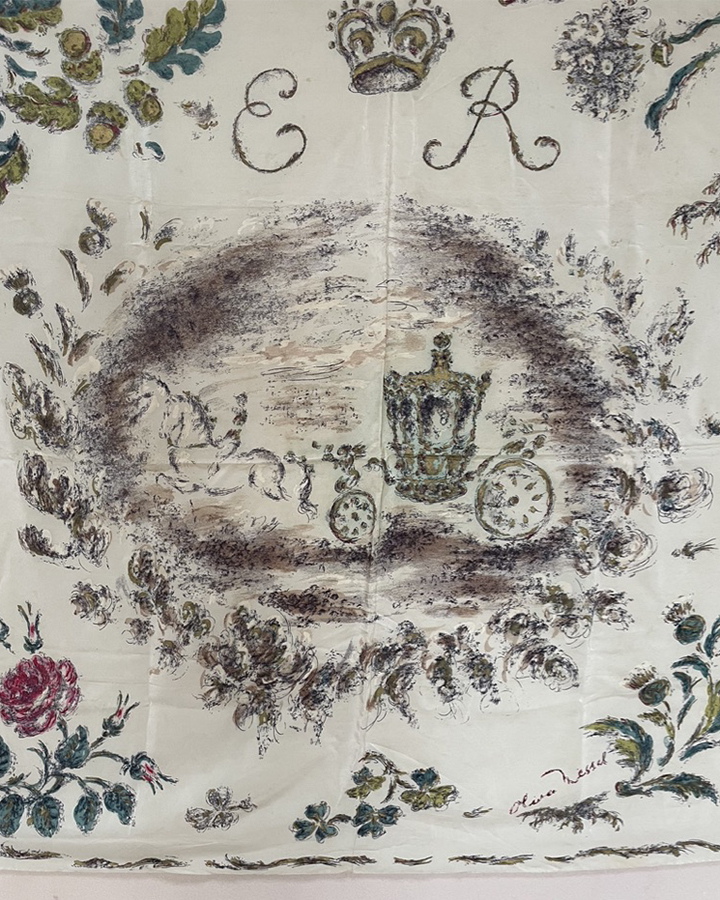 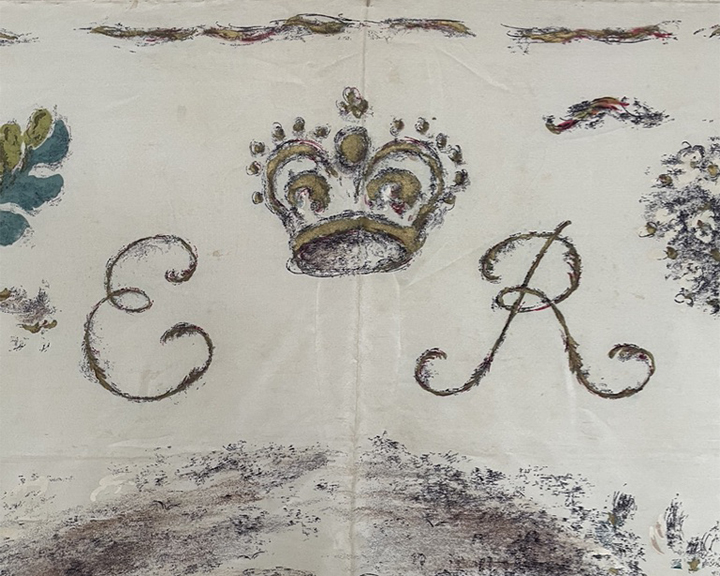 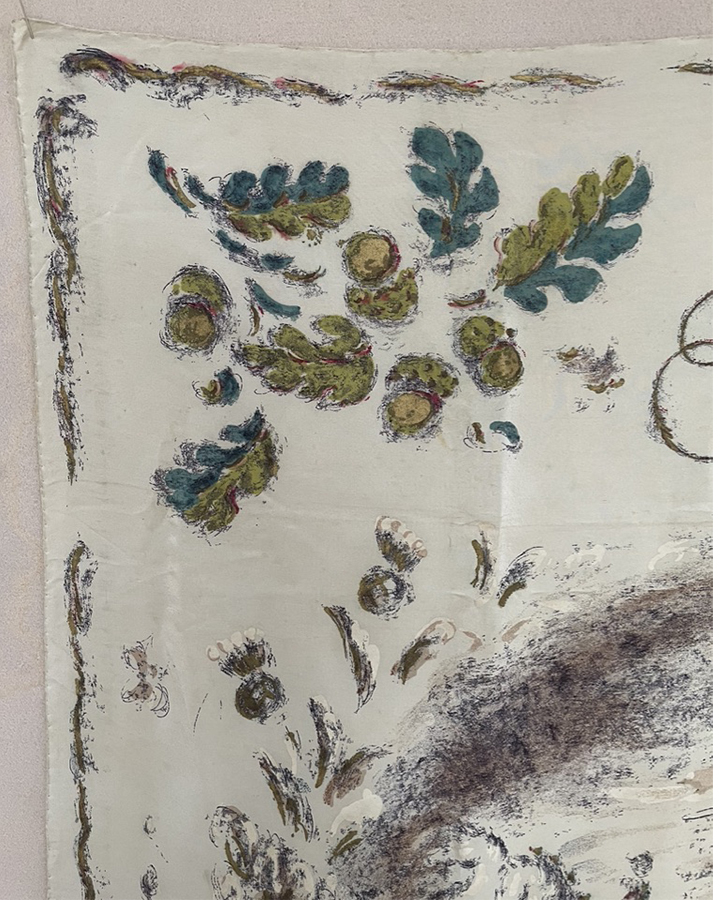 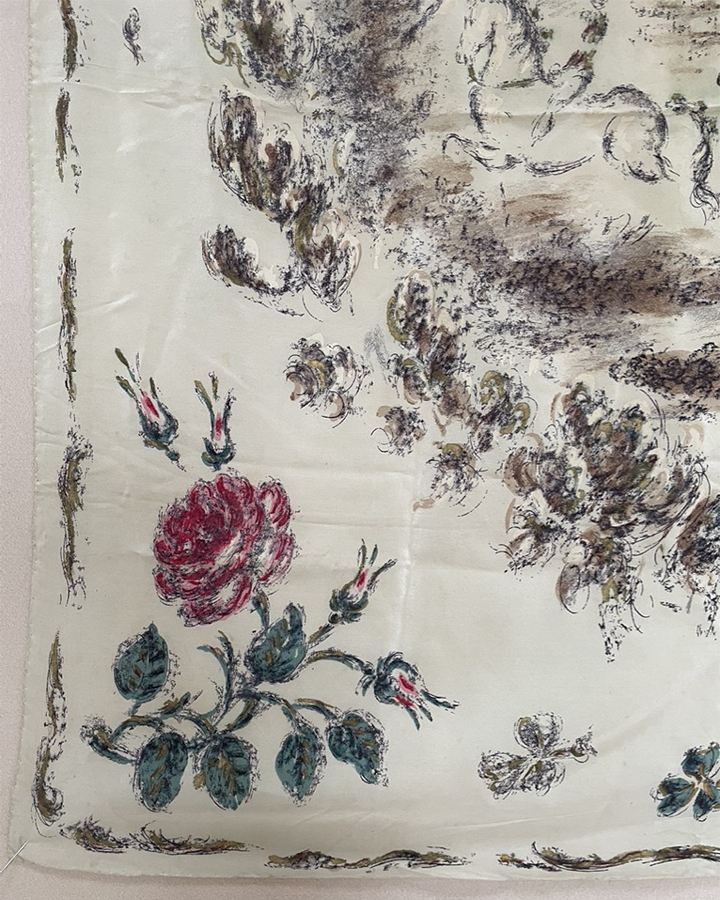 This scarf was designed for Queen Elizabeth II Coronation in 1953 by Oliver Messel for Jaeger, but manufactured by Cresta Silks Limited, with gold details. The same design was then produced for the Queen's Silver Jubilee in 1977, re worked with silver details.

With this scarf the gold is slightly raised as if it was hand painted, but obviously it was'nt.

Oliver Messel (1904-1978) had a successful career designing sets for ballet, including the Ballet Russes. He worked with Cole Porter, Noel Coward and Cecil Beaton on stage and screen sets. He was also a portrait pattern   Messel turned his hand to a host of creative practices, applying his art and design skills to a number of different art forms, designing programmes, greeting cards and textiles. He designed a range of commemorative silk brocades for Sekers Fabrics (formally the West Cumberland Silk Mill) to mark the Queen’s coronation in 1953. The finished fabrics were used by couturier John Cavanagh and made  into elegant gowns which appeared in Vogue. During the 1920s and 30s he was one of the 'Bright Young Things'. It is well worth reading below about this creative and fascinating man.

Oliver Messel’s grandparents were Marion Herapath  (1851-1914) and Linley Sambourne, the caricaturist for Punch magazine , They married in 1874 and moved to a Victorian house at 18 Stafford Terrace, which they decorated in the fashionable aesthetic style.  Their daughter Maud married stockbroker and collector Leonard Messel. On their death the house was eventually passed to their daughter Anne Messel, later Countess of Rosse (1902-1992). The house was kept as her parents had decorated it, and it was from there that Anne founded the Victorian Society in 1958.  The house was transformed into a museum, and is open to the public today as The Linley Sambourne House.

Anne’s first marriage was to Ronald Amstrong Jones in 1925, their son Antony married Princess Margaret in 1960 and received the title Earl of Snowdon (1930-2017).

Centre top with a crown and the initials E R, above the centred coach and horses, the four corners  representing the British Isles with a red rose and bud; (England) acorns and oak leaves (Ireland); thistles (Scotland) and shamrock (Ireland), Oliver Messel's signature to the lower right hand corner, all in shades of crimson, bronze, blue green, sage green, grey on a palest eau de nil silk ground, with gold highlights, the edges hand rolled.