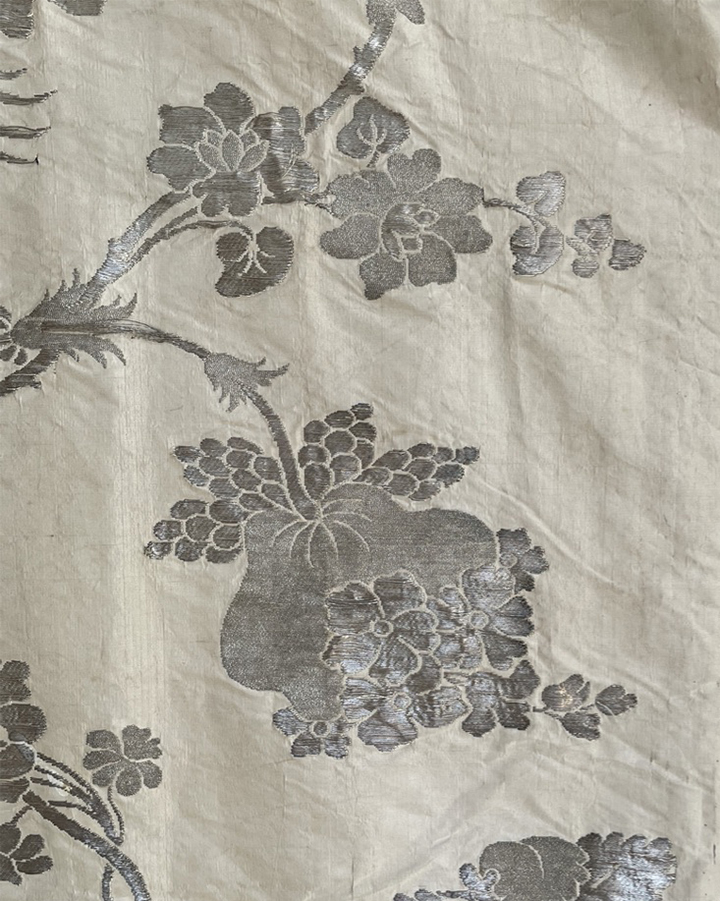 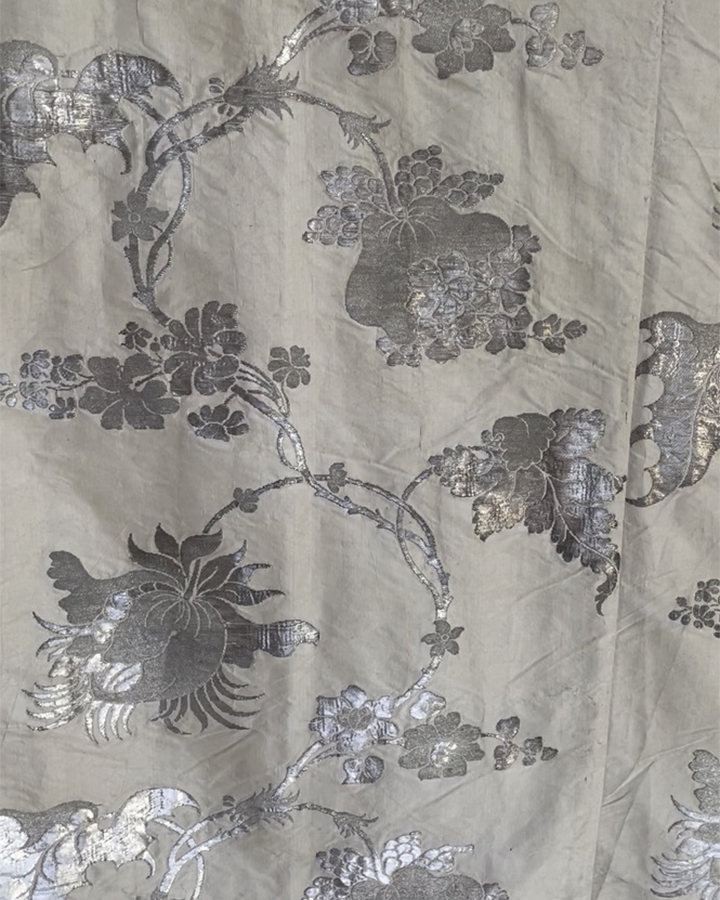 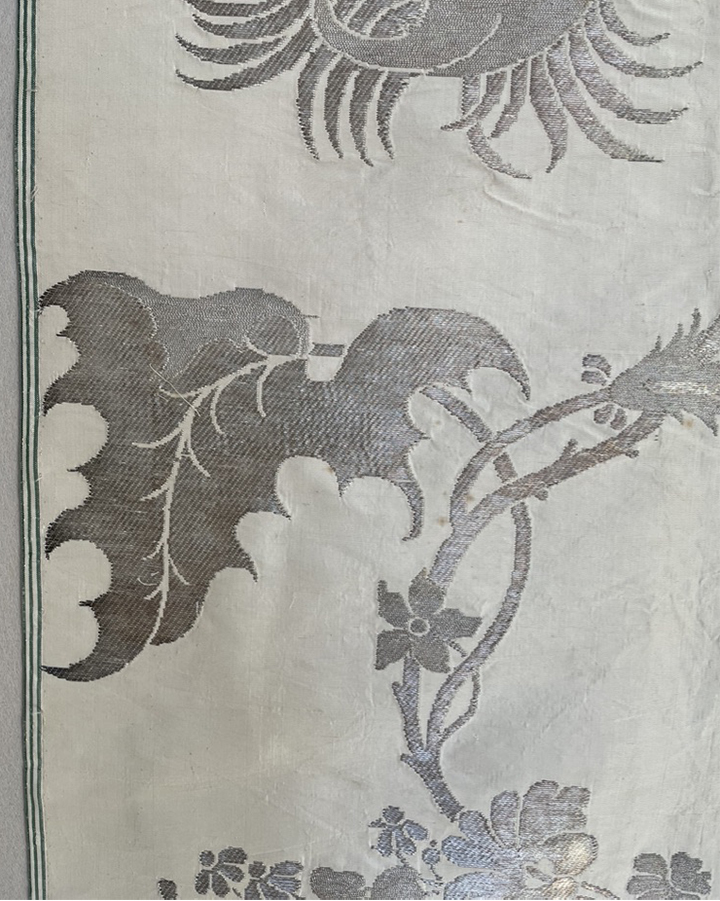 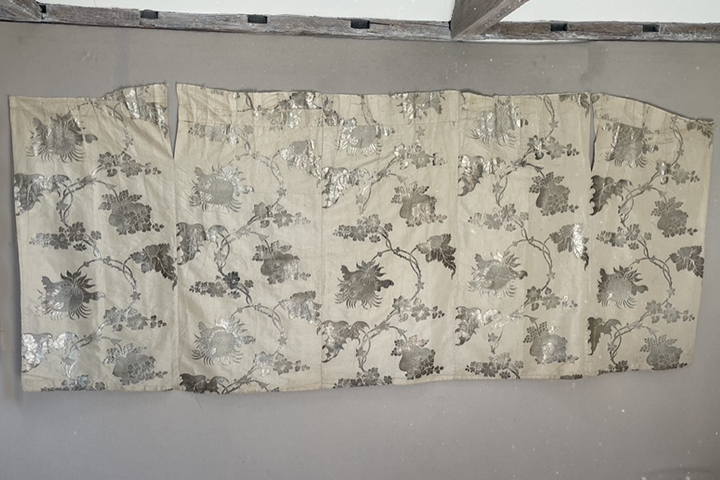 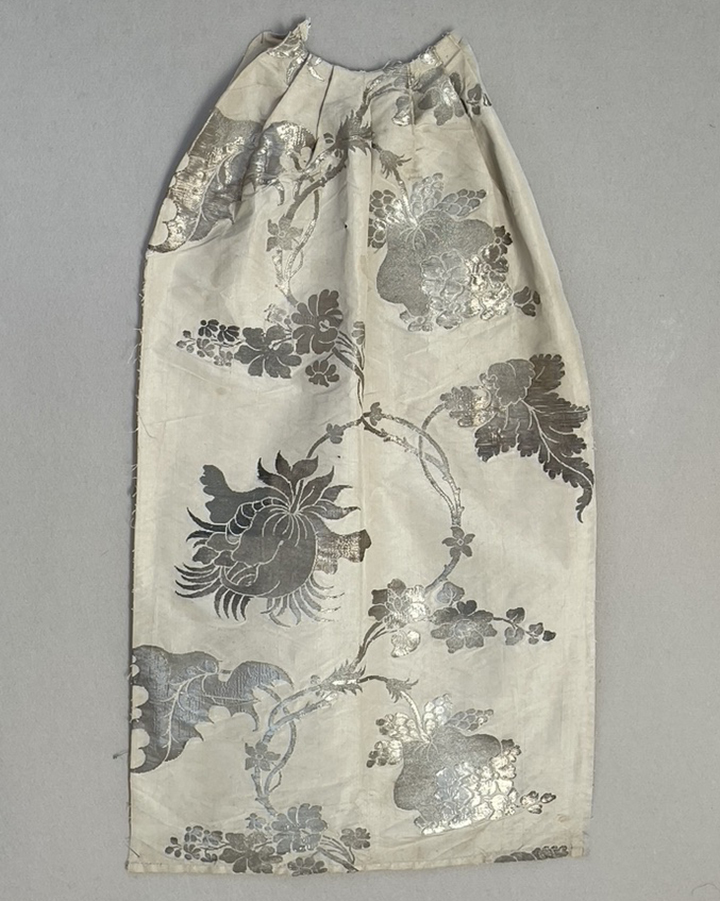 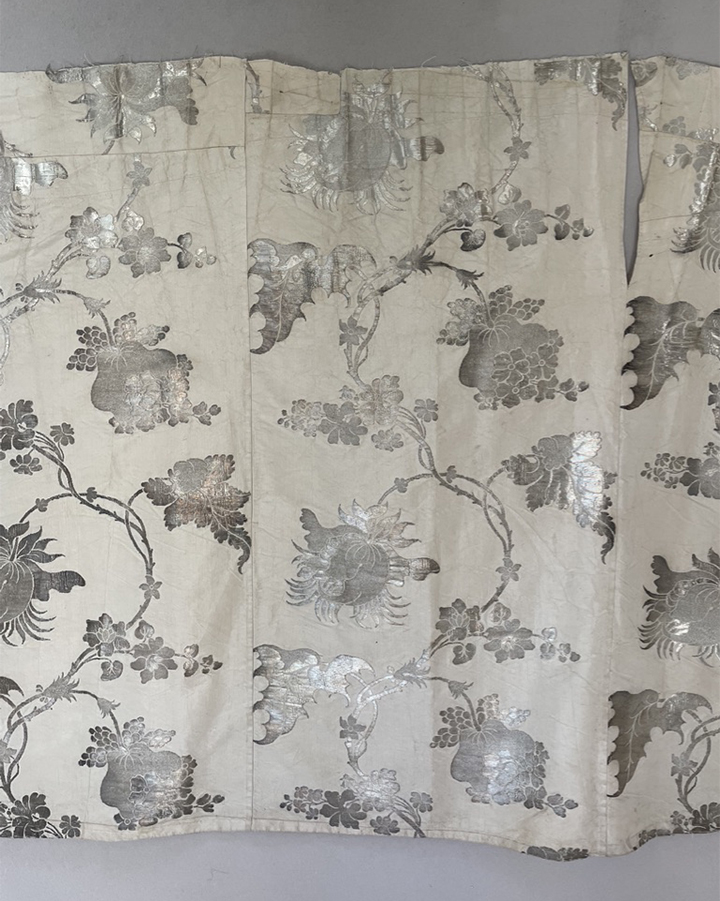 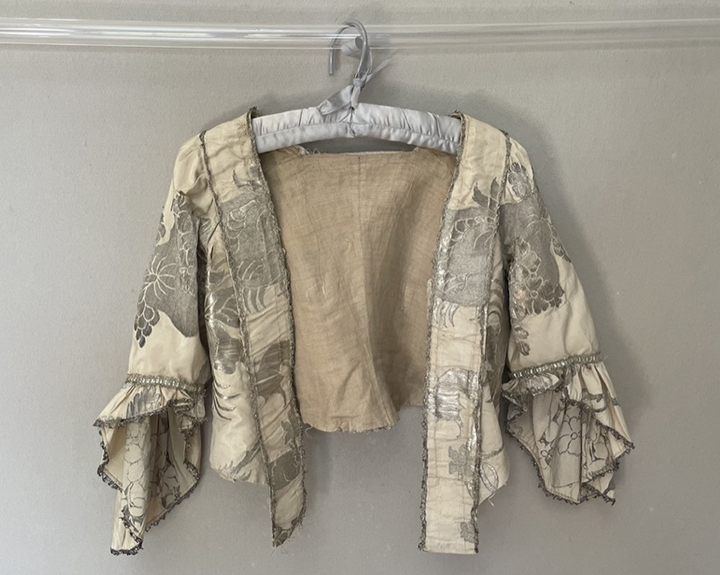 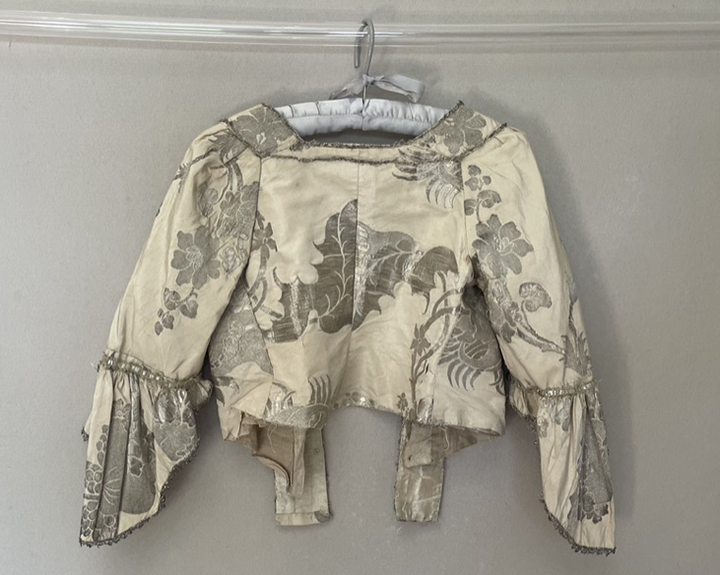 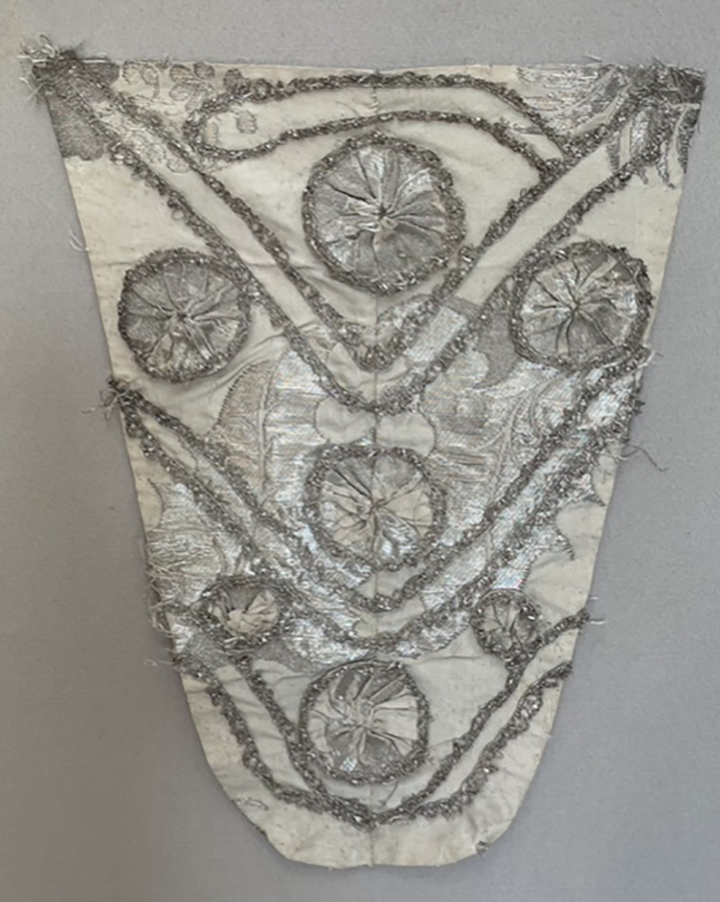 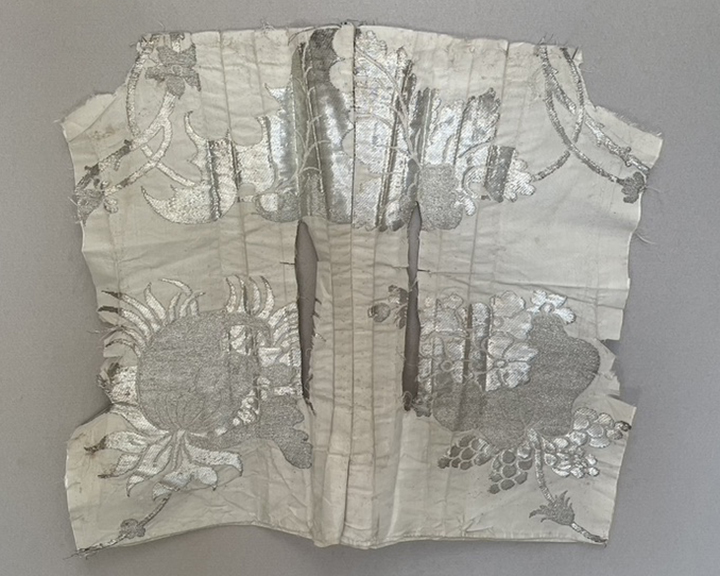 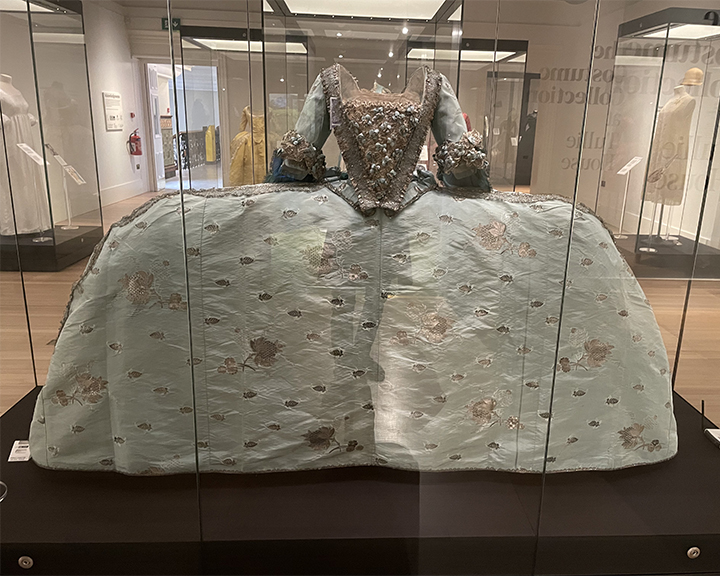 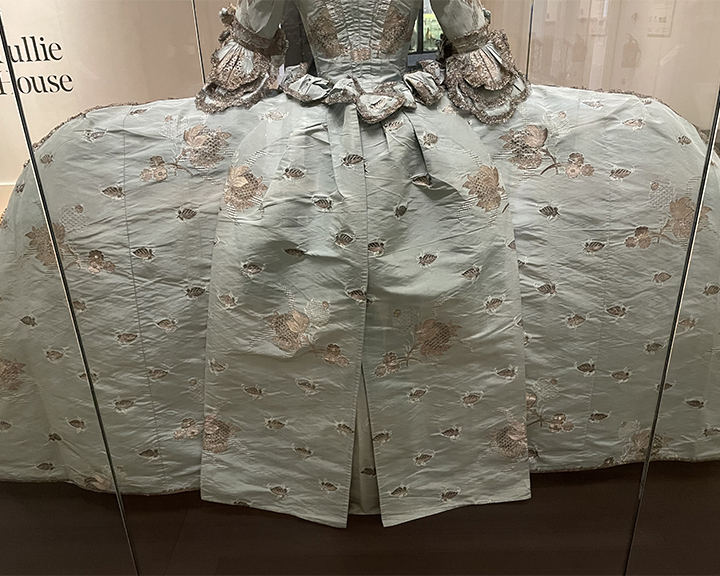 I am hoping to sell all the pieces from the mantua together. I feel certain the pieces could be made into a later gown, as so often happened with fine quality fabrics. This is the best quality, with all the silver thread, I have sold. However, if it does not prove possible to sell all the pieces together, I will offer them inidvidually. Do let me know if you might be interested.

Lengths of exceptional and rare silk brocade unpicked from a mantua (not by me) almost certainly designed by Spitalfields most famous woman silk designer Anna Maria Garthwaite. Because we cannot find an exact copy of the design of the silk, the academics will not say it was definately designed by Anna Maria Garthwaite, just probably designed by her. This is so often the case with textiles when the original designs cannot be found. The design is very similar to a design of an existing silk brocade.* This dress silk is sumptous and would have been extremely expensive to weave and purchase.  The surface texture of the flat silver-gilt beside a densely crinkled frisé is very effective. Imagine when worn at a candlelight ball. Rothstein talks about "quirks of style" in Anna Maria Garthwaite's designs, such as folded-over leaves, which you can see here with the acanthus leaves. One of the fruits depicted is the Buddhist citroen hand, a symbol of happiness, good fortune and longevity and is often offered in Buddhist temples. The fruit is very fragrant and used in China and Japan to perfume garments and rooms. Clearly Anna Maria must have observed these on the popular Chinese export textiles of the period.

Brocading allowed precious silver thread to be woven only on the surface of the silk, and not wasted on the reverse.

Mantuas were generally made for special occasions at court and were made from very expensive fabrics. The width of the panniers indicated the social status of the wearer.

Part of a collection recently found in a house which was built in 1550. However it is not known who actually wore the dress.  Full provenance available.

Anna Maria Garthwaite (1690-1763) established her trade at 2 Princelet (formerly Princes) Street, Spitalfieds, and lived and worked there from 1730 (aged 40) until her death in 1763. There is very little known about Anna Maria. The information below comes from Natalie Rothstein's book.* Anna Maria was the daughter of the Rev Ephraim Garthwaite of Grantham, Lincolnshire and his wife Rejoyce Hansted. She lived with her family until her father died when she was 36.  Parson's daughers and wives had no income or home when their fathers died. Anna Maria moved in with her sister Mary and clergyman husband.  What is so astonishing is that AM had no training as a designer, and despite considerable research by Natalie Rothstein, it is not known how she learned to draw so competently, nor where she learned the technical skills to design for a drawloom.  Perhaps she was naturally gifted at drawing and was quick to learn the techniques for making the drawing suitable for the weaver. Presumably she needed to make a living to support herself and possibly her sister, after her husband died.  It is known that she was designing whilst in Yorkshire.  When Mary's husband died, Anna Maria and her sister moved to London around 1729, when she was 40, and lived in Spitaflields until her death. As a freelance designer she produced eighty designs a year, almost entirely for dress silks.  Her nephew Vincent Bacon was an apothecary and surgeon with a practice in Spitalfields. He was also a naturalist and with  shared interests, together must have discussed and looked at drawings and specimens, which Anna Maria would have copied and been influenced by. Both the Garthwaite's and the Bacon's had strong clerical affiliations, but also mercers and other tradesman in their families.  Botanical styles became fashionable in the 1740s, and Anna Maria's choice of unusual flowers suggest she may have known Peter and James Collinson. They were merchants trading with America, particularly in textiles, but had an important garden in Mill Hill which Anna Maria probably visited for inspiration.

I attach a photo of a wonderful mantua from Tullie House, Cumbria costume collection. The skirt has three flat widths of silk to the front and back, a total of six.

The finely ribbed ivory silk tafetta ground brocaded and woven with a huge design of fruits and flowers, including a Buddhist citroen hand.  Two effects are produced with the silver-gilt, which has been spun round a ivory silk core. The first effect is of flat strips side by side contrasting with a densely crinkled effect frisé, the selvedges with three green stripes.

9 - Made up bodice. The back is all wrong. The sleeves are original but have been taken in and the ruffle/ frill is from the original gown, but most likely from the front section. Lovely original silver metal braid. Linen lined.

All lengths have some feint fold markings from when they were made up as a mantua.

a - has a small extra triangular piece originally added to the top. The top has folding creases. There is a 3/4 in; 2 cm vertical split below to the top left fruit. Slight tarnishing to the first and second fruit going down the fabric, on the right.

b - has had two narrow lengths originally added to the top, totalling 5 in; 12 cm. Slight tarnishing to the centre large fruit to the right and the small flowers slightly lower down to the left. A little of the silver gilt to the hem area has come away.

c - has a deep 5 in; 12 cm band originally added to the top. A little more tarnishing overall to the large lower fruits.

d - There is a 4 x 2 in; 10 x 5 cm patch to the top left hand corner, but probably original. Tarnishing to the top area. There is the pocket slit on the right hand side.

e - The last panel has two pieces joined at the top left hand side. slight tarnishing to the large motifs.

8 - The rosettes have to have been applied later, but they are the same brocade. The tinsel is original.

9 - Originally there would not have been a central back seam.

Do ask for more photos.

https://collections.vam.ac.uk/item/O15327/dress-fabric-garthwaite-anna-maria. This example designed by Anna Maria Garthwaite, is a silk tabby brocaded in silver thread.