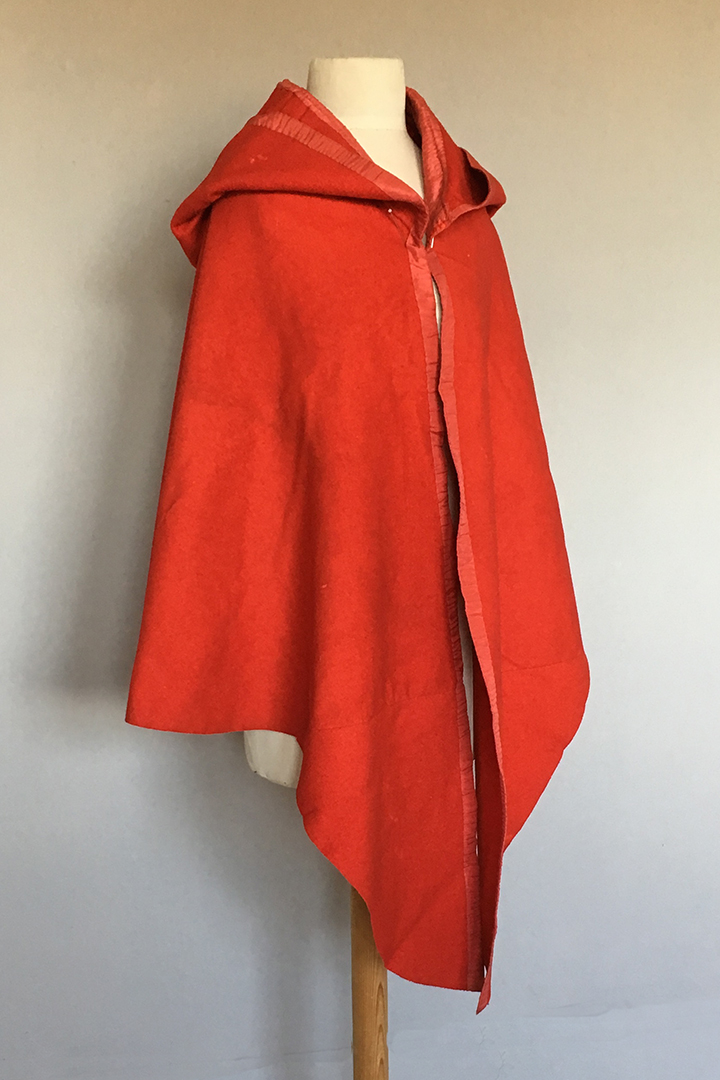 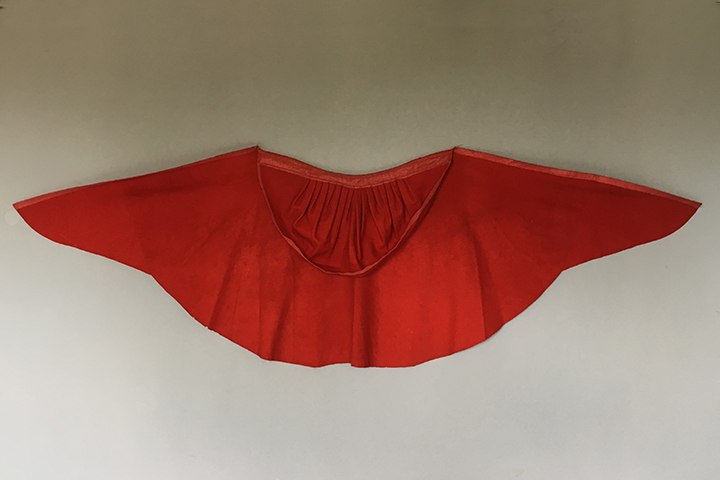 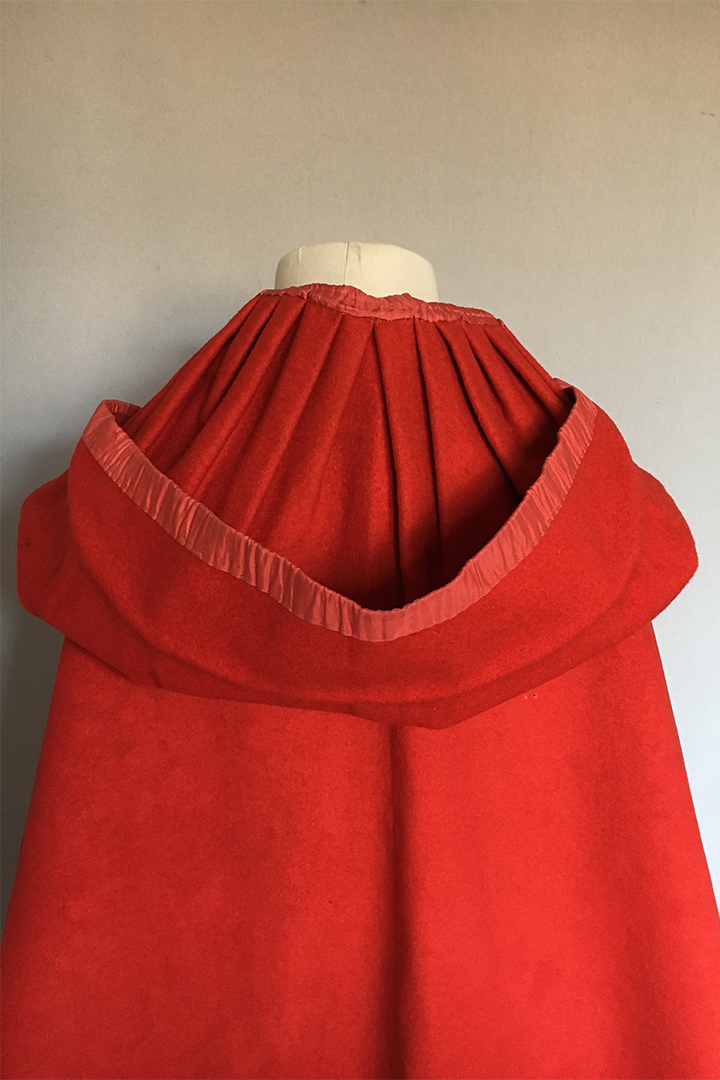 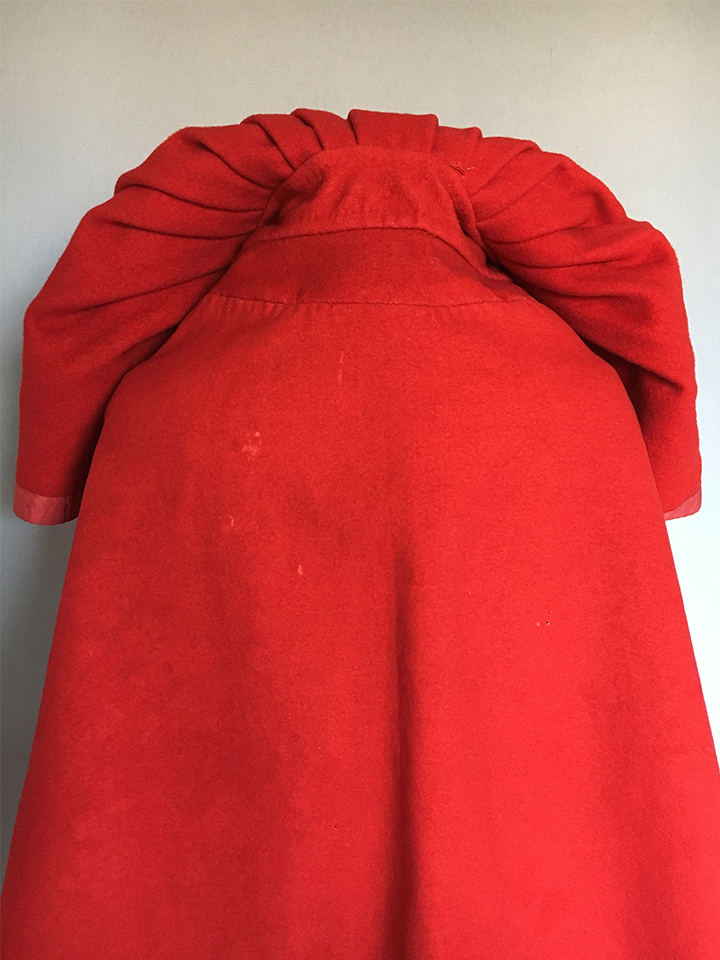 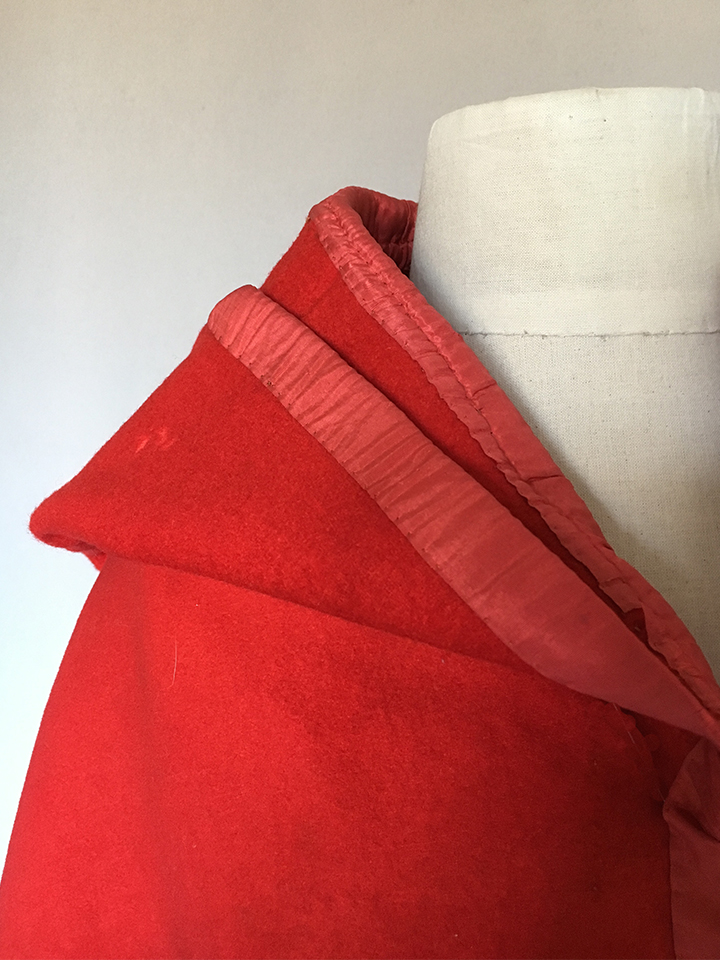 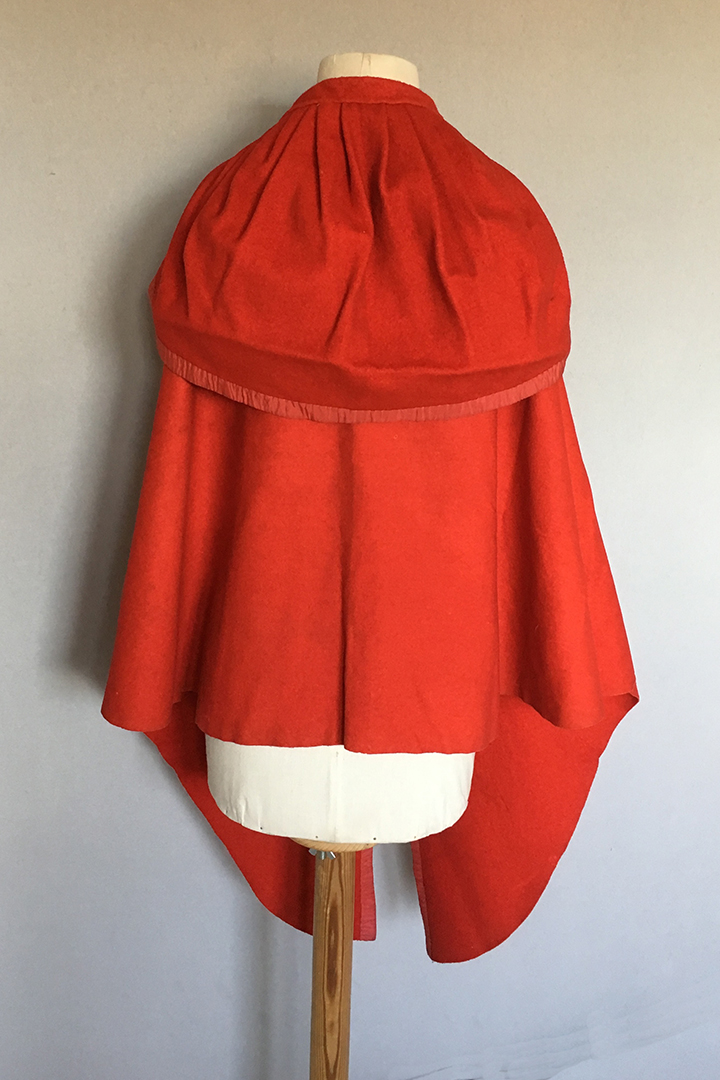 Scarlet wool cloaks became so popular for rural wear that they could be called traditional wear. A shop in Norwich, in 1785, had scarlet 'cardinals' in stock, costing 10s,12s or 15s for women*

Broadcloth is wool which has been plain woven, fulled, napped and shorn to give a tight dense weave with would have given protection from rain.  The cloth was woven so tightly it did not unravel and so there are no turnings to the edges. The huge hood covered the large hairstyles and caps of the period.

Provenance: This was sent to me by the vendor. I will issue her name to whoever buys the cloak.  "My mother's name was Patsy Flippance. She lived at 3 Queen's Park Road, Caterham, Surrey at the time she was given the cloak. Her neighbours at no. 4 were two elderly, unmarried sisters, Gertrude and Mary Barnes, who had, as far as I know, lived in the house all their lives. The family had been well to do, and the sisters had travelled widely together, collecting rare plants for their wonderful garden (as a child, I used to peer through a hole in the fence into it- it looked like fairyland to me!) When Gertrude died, Mary, who was by this time very old herself and almost blind, decided it was time to go into a home. My mother spent many hours with her, helping her sort her house. It was a large, elegant, shabby house, full of beautiful, dusty furniture and antiques which had been in the family for generations. One day, they were sorting a chest full of old clothes and my mother discovered a pale blue silk dress with a quilted petticoat, a strange little red felt cloak and some pieces of silk. She had studied costume design so knew immediately that the dress was about 1735 and examined the pieces of silk and realised that they were hand-painted and were probably the same period. She was intrigued by the the cloak with it's distinctive, pleated hood, and felt sure it was about the same date as the dress. She asked Mary where they had come from and she said they had always been in the family and she and Gertrude used to dress up in them when they were children! Knowing my mother was interested in costume, she insisted she should have them. My mother said she would love to keep the cloak and the silk, but didn't feel she could accept the dress as it was obviously valuable. She suggested that Mary might like to donate it to the V&A. So my mother made an appointment and took all three items to show them. They were delighted with the dress, and loved the pieces of painted silk which they said were indeed the same period, but it was the little cloak which really excited them. They told my mother that it was one of the original little red riding hood cloaks and that the strange, uneven hem was as it should be (my mother thought someone had cut it off!) Anyway, she gave them the dress and kept the cloak and pieces of silk for many years and eventually passed them on to me".

The red broadcloth cut shorter and curved at the back, lengthening at the front, a horizontal join seam  the large hood with radiating fan type pleating to the back, inside lined with scarlet sik, similar edging to the hood and front of the cloak.

Very good. Front left has a small area of wear, the size of half of pencil end! There are two very small holes to the back and small areas of wear under the hood. There is also some feint discolouration to the back.  Ask for photos.

The silk hood tapes for tieing are missing but evidence of them.