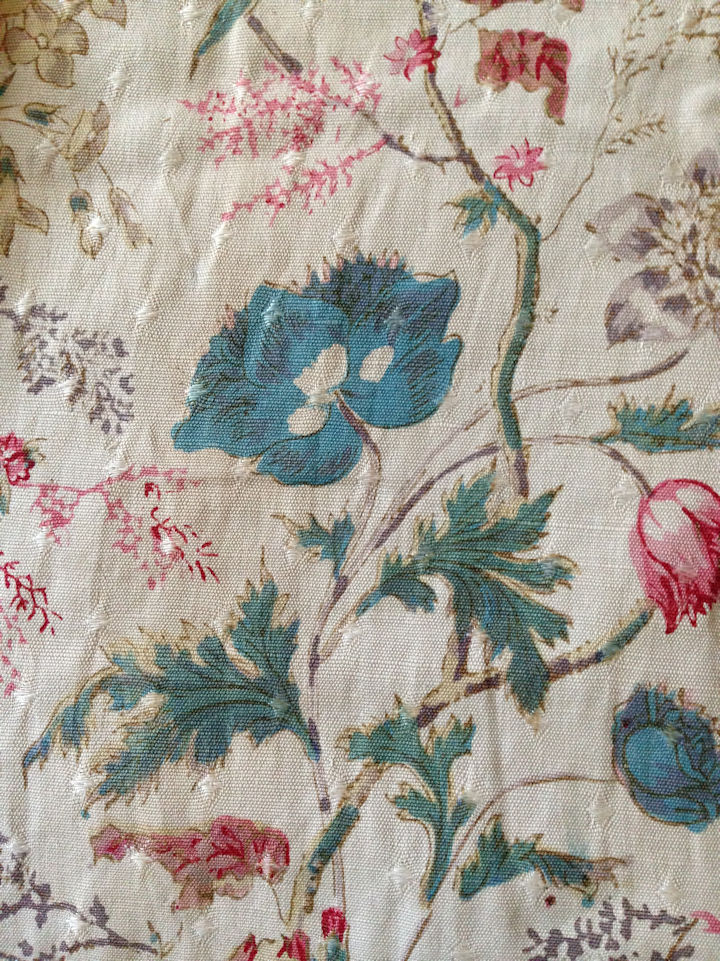 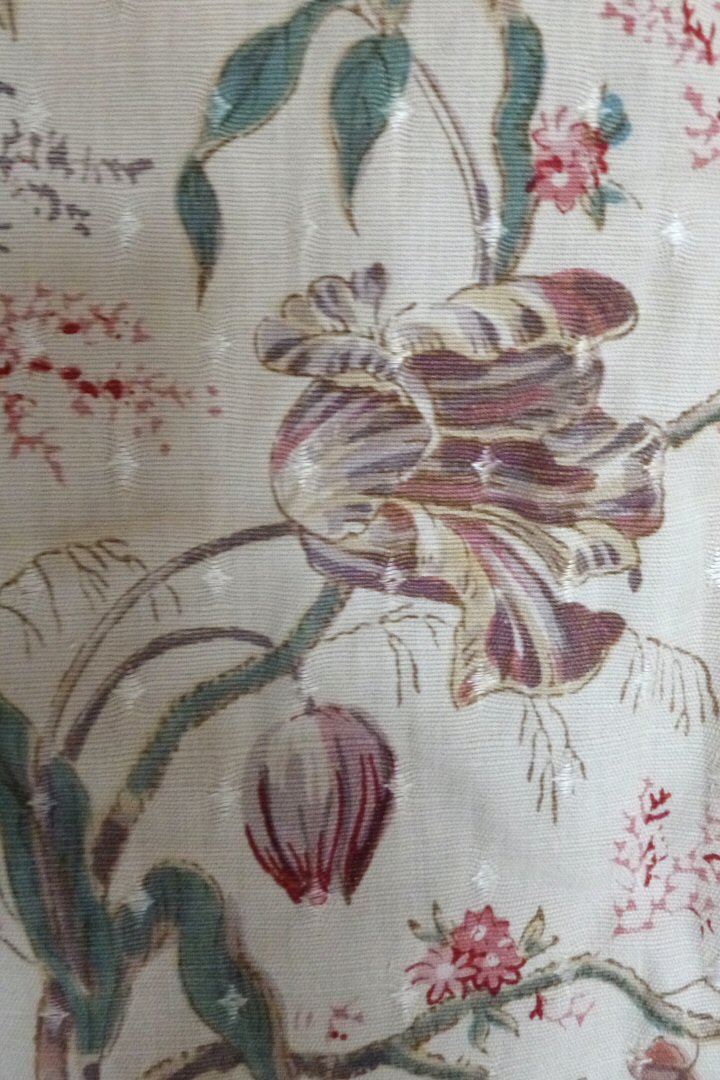 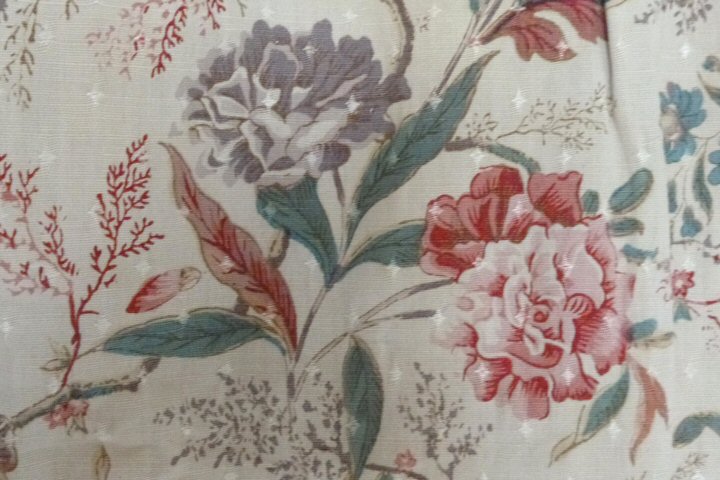 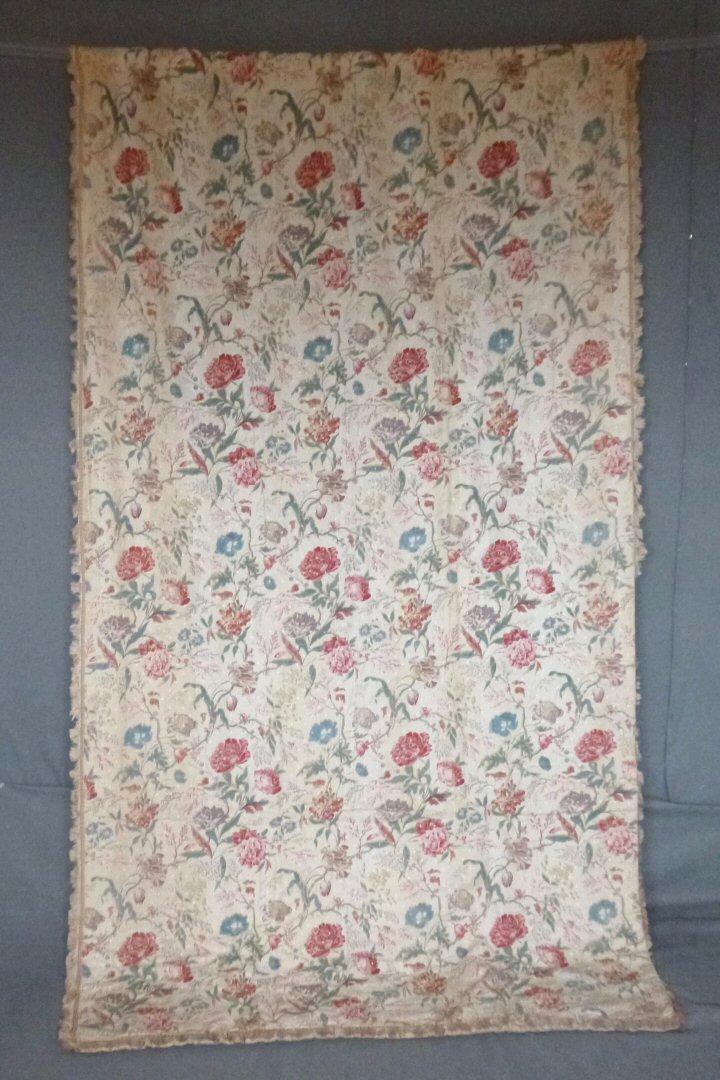 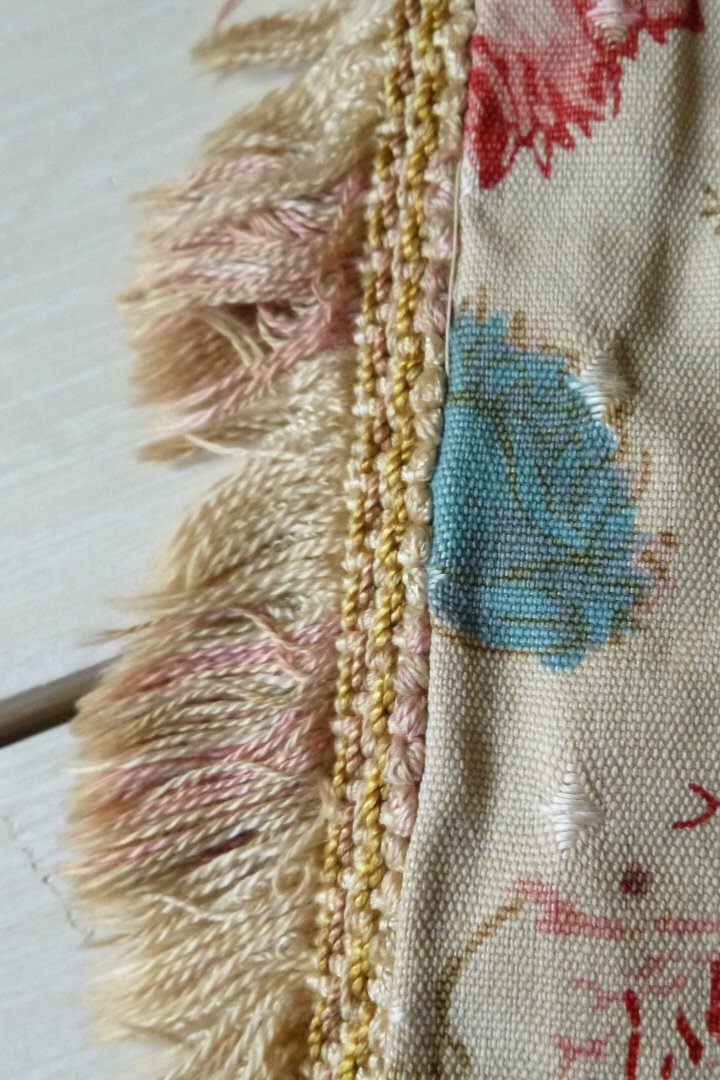 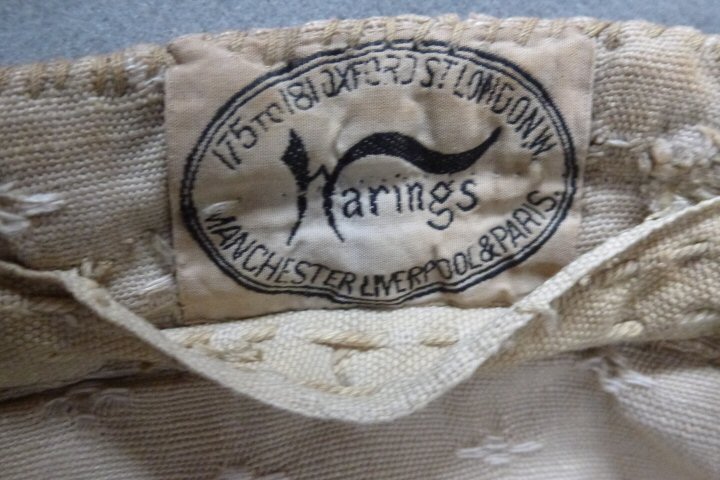 There was a prevailing vogue in the early 20th century for reproduction designs, which encouraged Morris & Co to produce four fabrics named after country houses. Tangley was named after Great Tangley Manor in Surrey when the Morris firm used the design as part of their interiors scheme * I know Philip Webb made additions and alterations to the house for a second time in 1893, which is probably when Morris & Co worked on the interior.

Adapted from from a hand block print produced by Bannister Hall in 1837.  Queen Victoria used this pattern at Windsor Castle. Orignally block printed at Merton Abbey by Morris & Co. The fabric proved to be very popular and Merton could not keep up with demand.  Morris & Co commissioned Stead McAlpin of Carlisle to print the fabric for them on 48 in/1.22 m width fabric. The background dobby weave cotton was probably produced in the Manchester area.**

The curtain has a sewn on label Warings, 175-181 Oxford St, London W.  Manchester, Liverpool, Paris. The furniture manufacturers Waring and Gillow were formed in 1897 by the merger of Gillow of Lancaster and Waring of Liverpool. They established a reputation for supplying high quality furniture to some of the richest families in the country. I would imagine their client choose this Morris & Co fabric as part of her interior decoration scheme and Waring's workroom made it up into curtains.

It is likely the braid, which one seems quite often on Morris & Co textiles, was made by A Sindall of 116-8 Middleton Road, East London.

I asked Linda Parry* about the design who said she had never come across a Morris & Co fabric with Warings label before but she wasn’t at all surprised. She thought it was equally likely that a Waring's customer could have taken this Morris & Co fabric to get the curtains made up or that Warings were retailing the fabric themselves. Marillier, Morris & Company's managing director, was trying all sorts of ideas in the post-war period to keep the Firm going and it could be that Warings & Gillow were approached as a distributor.

The design dates from 1929 and is, by origin, a Bannister Hall design***.  It was printed for Morris and Co in 1868.  It isn't clear whether our piece was printed by Bannister Hall.  They were still a going concern up until 1893 when they went into receivership and their assets were acquired by Stead McAlpin so this is likely.  However I cannot rule out Morris having acquired the design and then had it printed elsewhere.

Slight tear to the lining.

** My thanks to Sue Kerry for this information.

*** C6809 which is the Bannister Hall production number. My thanks to Gavin Henderson of Stead McAlpin for giving me this information.