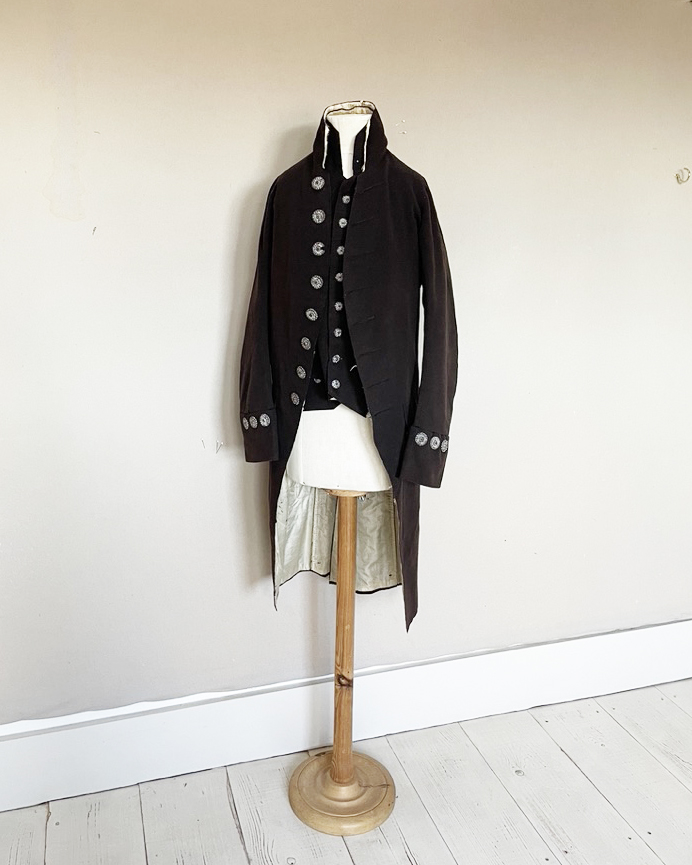 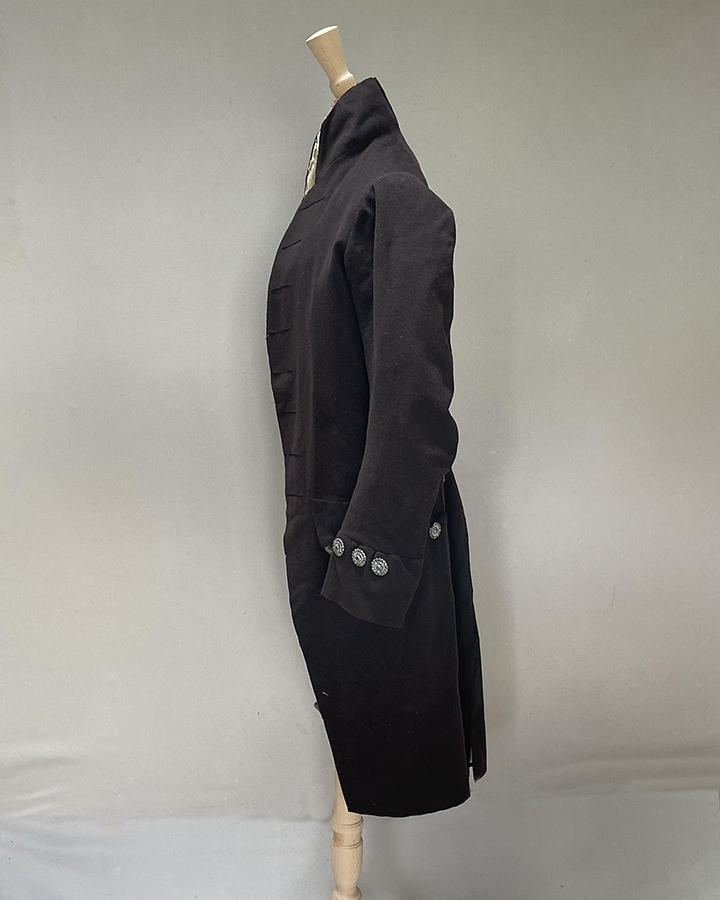 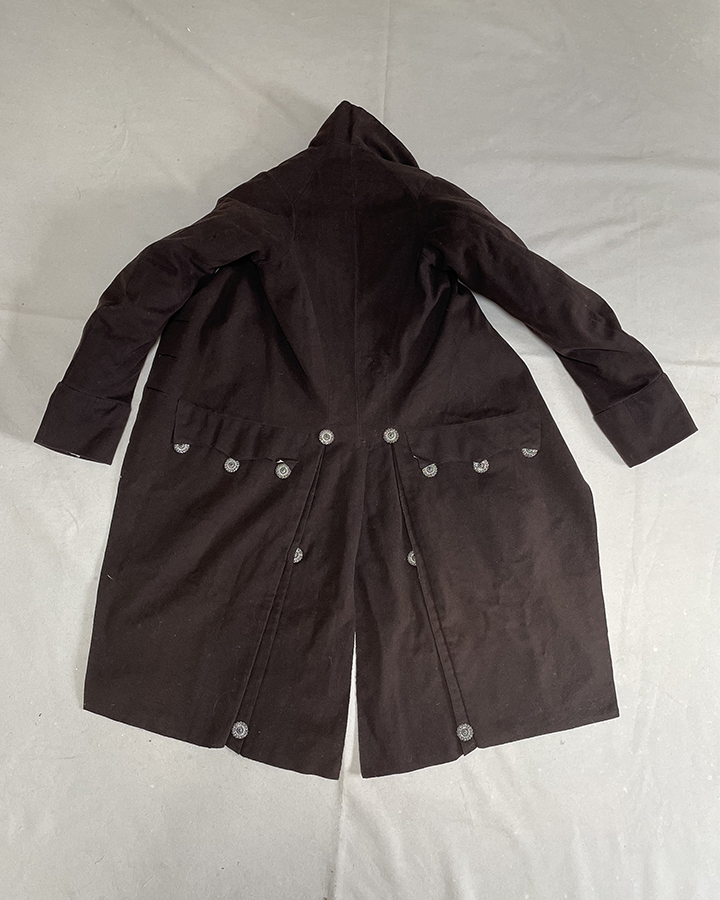 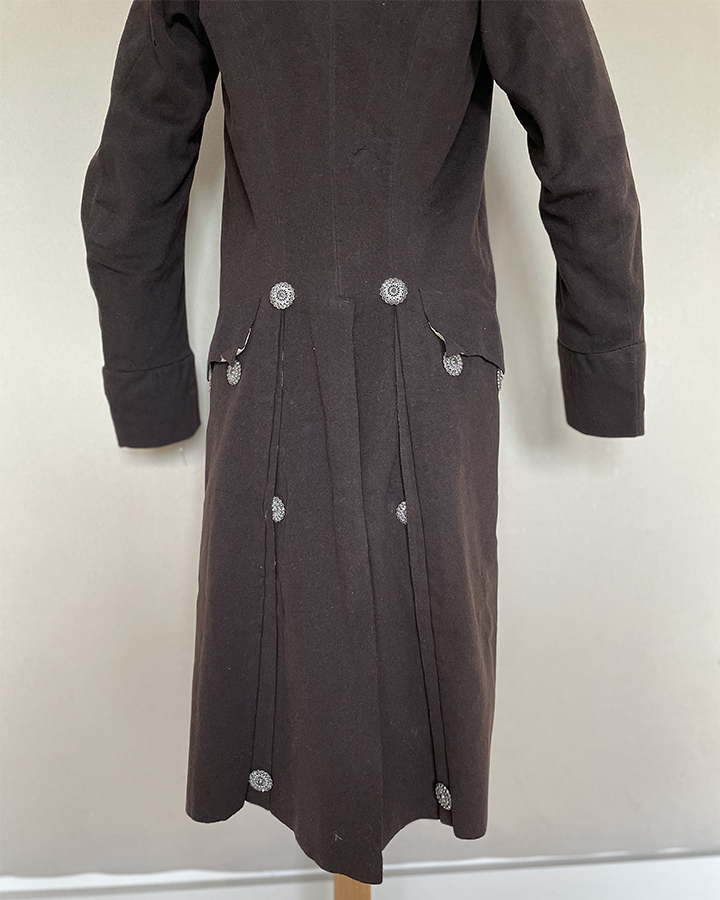 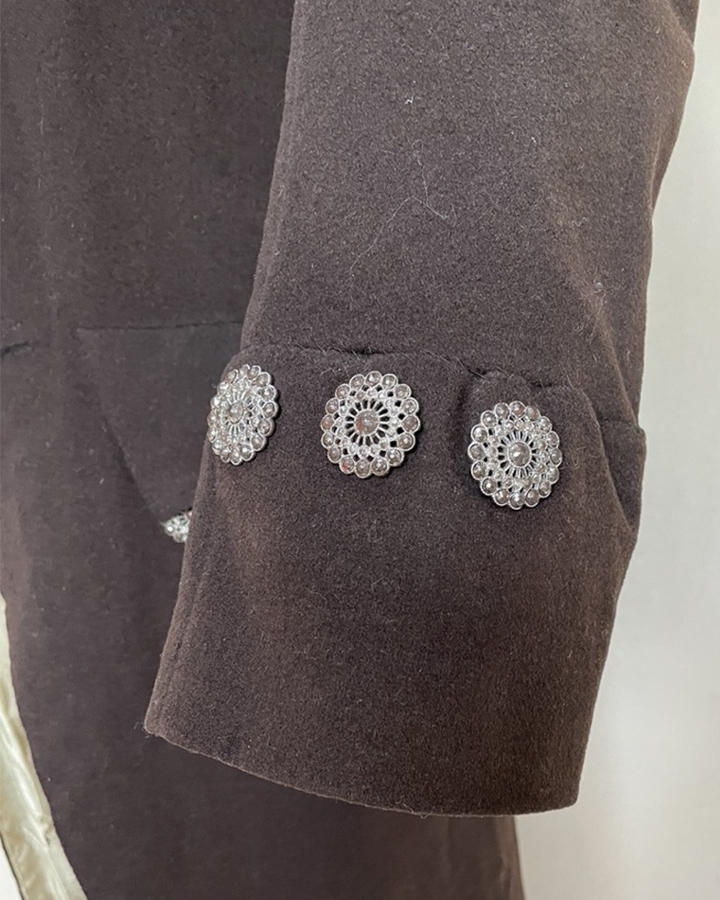 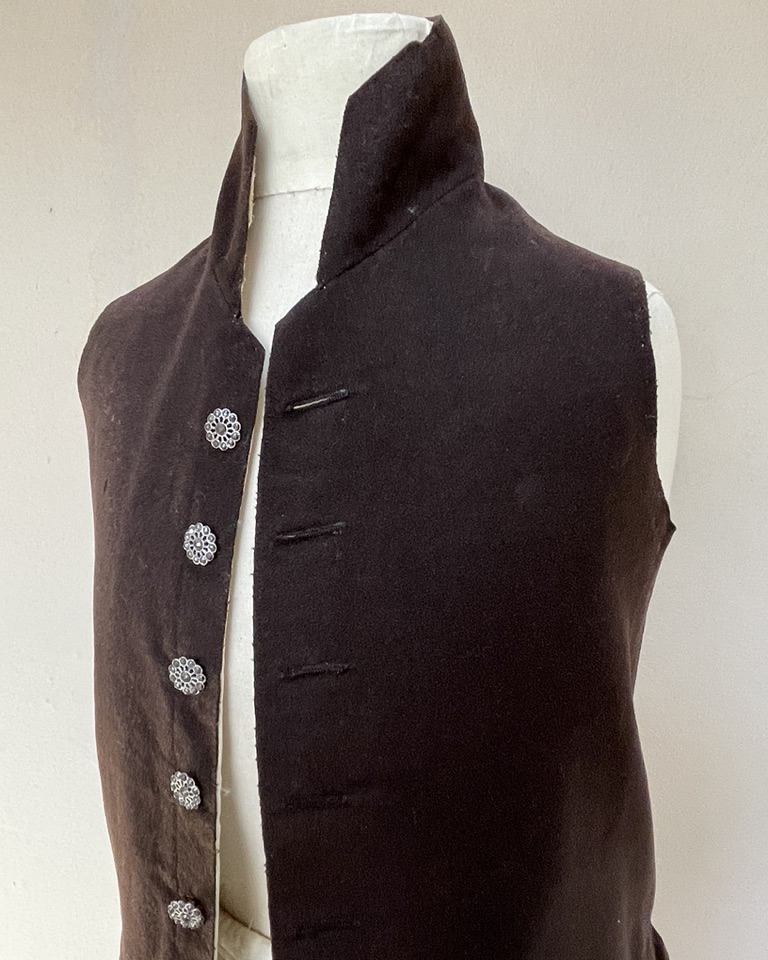 There is a 20th century label sewn into the coat which says Eyre-Matcham. It is most likely this suit was worn by George Nelson Matcham (1789-1877) who married Harriet Susan Eyre (1792- 1873) in 1817, at age 25 years. Harriet was the daughter of William Purvis Eyre, who inhertited the Newhouse estate on her marriage.  George adopted the name Eyre and was known as George Eyre-Matcham. The coat and waistcoat are small so worn by a young man.

From the collection of the late Mrs June Jeffreys (1928 – 2016) who married George William Eyre Jeffreys (1931 - 2019) in 1960. The house Newhouse, Redlynch, near Salisbury, Wiltshire, has been in the family for 400 years and many of the dress collection was inherited through Mr Jeffrey’s family. I would be pleased to send out the full family history should you be interested. George's father married Kitty Nelson, Admiral Lord Nelson's sister.

The jacket of dark brown facecloth with high neck, the curving front with eight cut steel buttons, the top two button slits are fake, followed by four which could be done up, followed by two fake, the sleeves with three similar buttons, the deep shaped pocket flaps with three buttons, a deep back slit flanked by a pleat with three more buttons, the whole with cut edges, lined with cream fine ribbed silk, a mid 20th century white cotton label woven in red with Eyre-Matcham sewn inside.

The breeches with high waist with two metal buttons with four holes, two further plain silver coloured buttons to the lower waistband, the front fly opening with three similar buttons (one missing), a flap wither side concealing pockets, decured to the top with self covered buttons, the back with two four holes metal buttons, the centre seam with three hand sewn button, holes above v shaped seaming, the cuffs with simple closure for button (buttons missing) and buttonhole, the slit above with three cut steel buttons, the whole with cut edges, lined with white cotton, the fall front with ivory twill weave silk.

A black silk wig protector. The wig catalogued seperately came from the same house. I am not sure whether it would have been worn with this suit, perhaps someone can tell me!

The condition of the outside of this suit is amazing with no damage or moth holes. The inside lining is quite damaged in parts as below. Ask for photos.

The jacket: The outside is in very good condition. One of the cut steel front buttons is damaged. I would suggest this could be swapped with a pocket button, which are of the same size and are slightly obscured by the pocket flap. The lining is very damaged and has patched repairs. Photos available.

The waistcoat: The outside is in very good condition.  The neck area has been repaired with large stitches to hold the silk in place. The button edge and lower edges have been relined with ivory silk. I would imagine the original silk has been covered.

The breeches: Very good condition, no damage.  Two cuff buttons missing to one leg. The silk lining to the fly front is very damaged.

The fascinating wig protector 's bag under the satin rosette has shredded to both side, to reveal and horsehair pad.