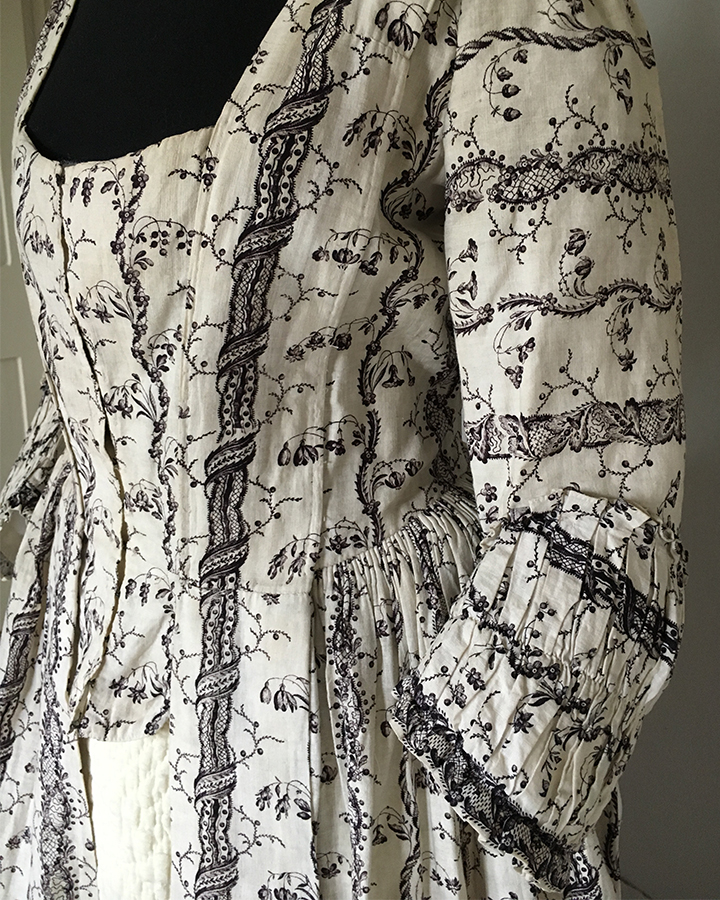 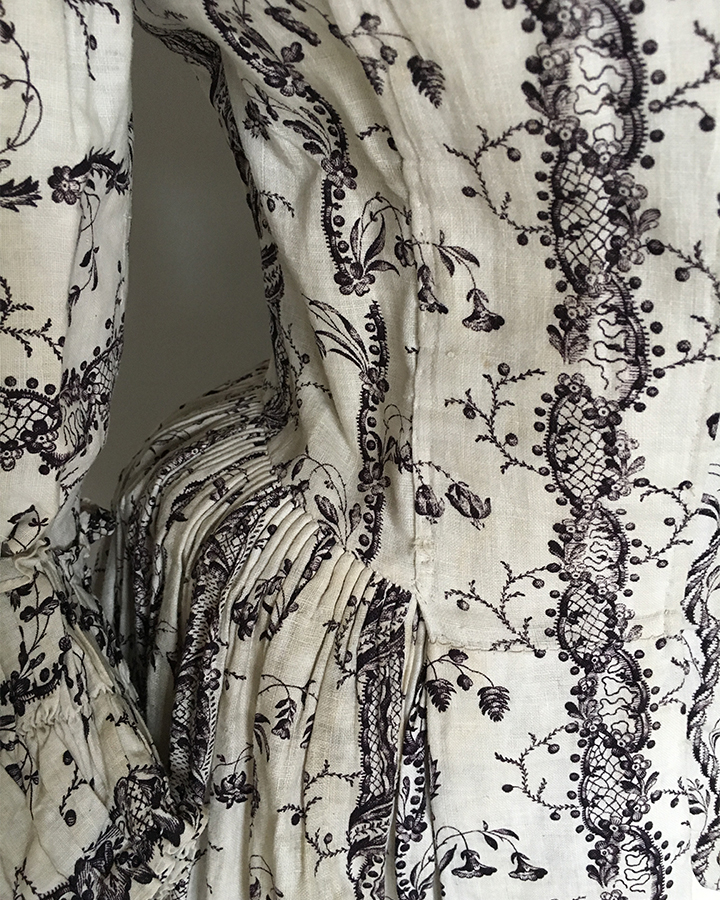 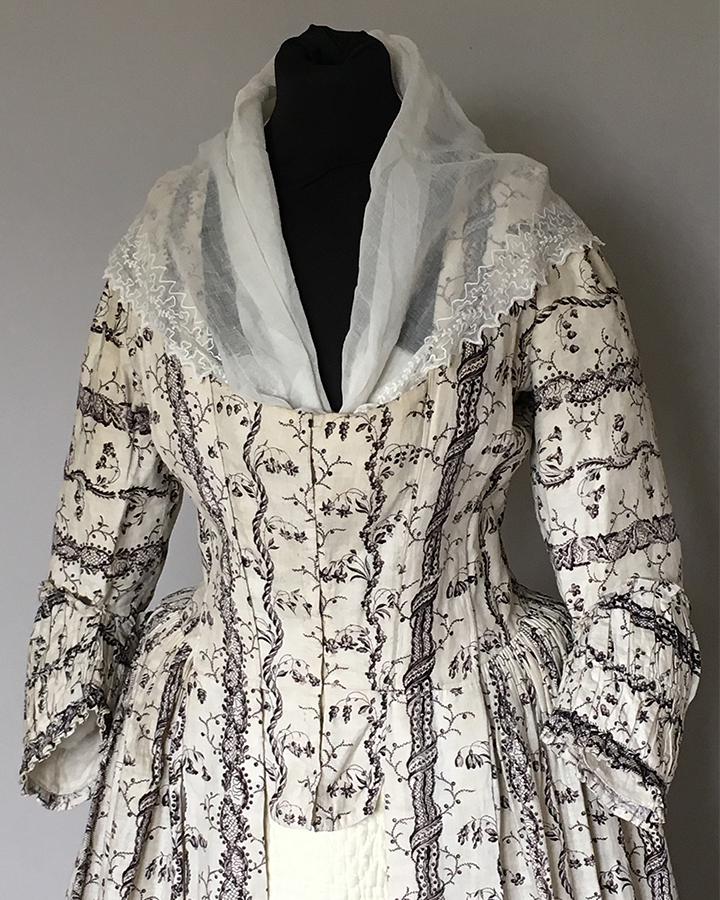 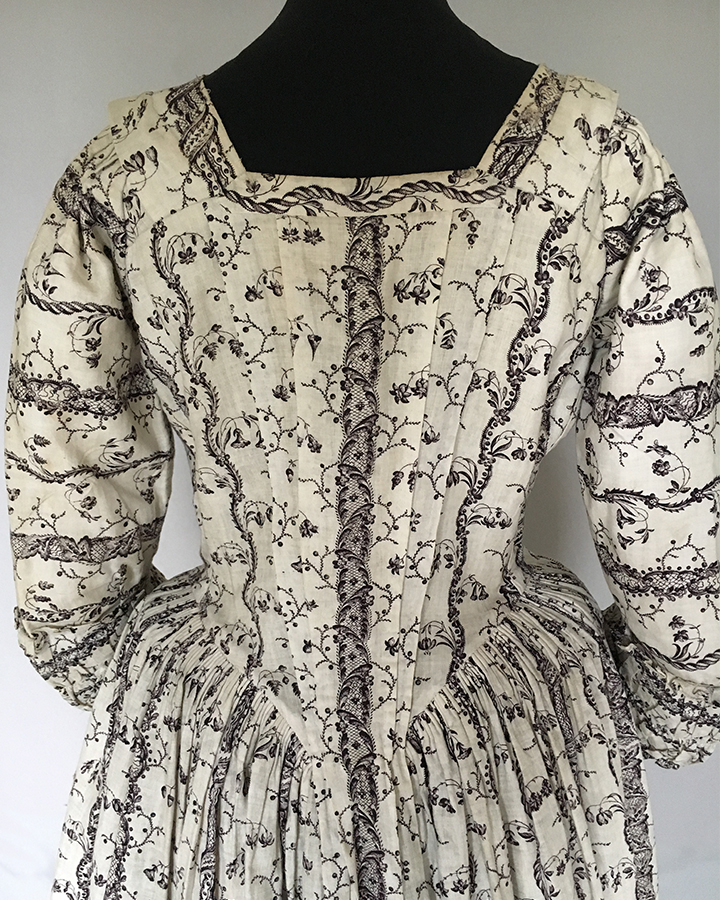 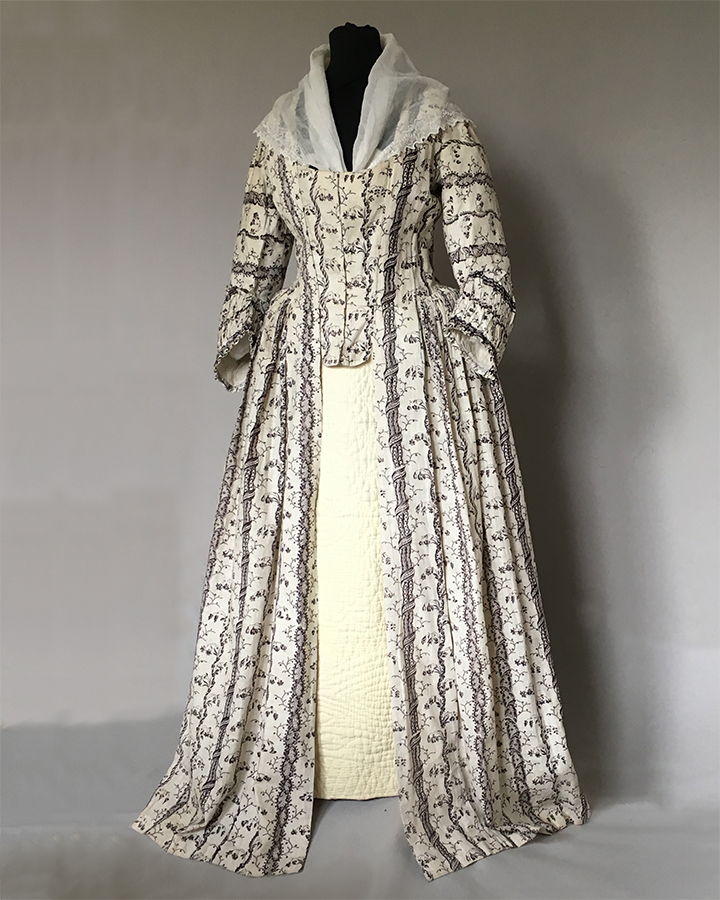 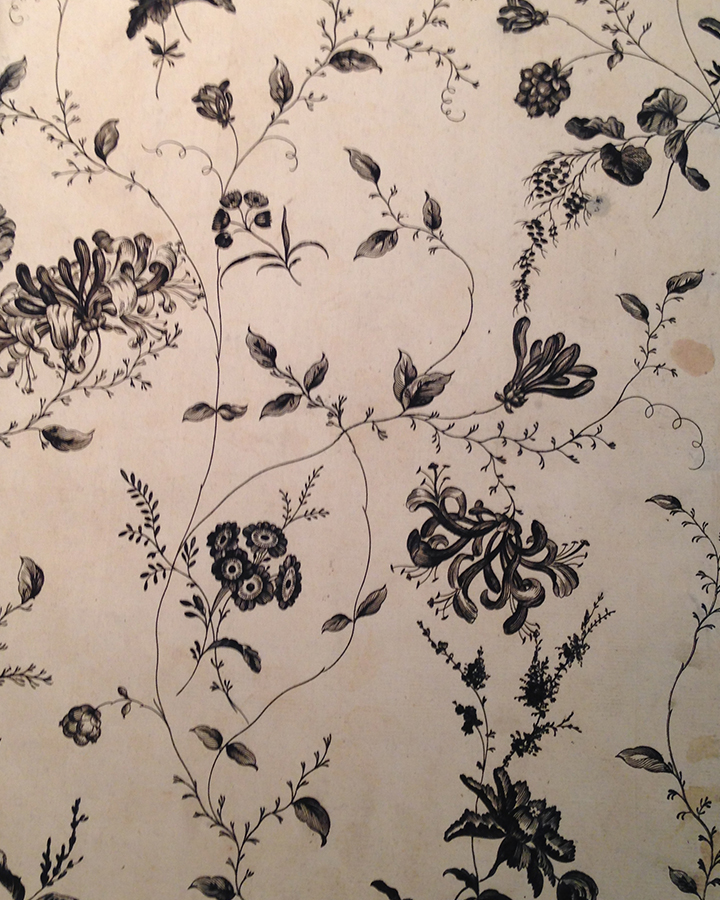 This extremely rare copperplate engraved gown has different flower blooms and fruit on one stem, a good indication of English manufacture.

Philip Sykas kindly looked at photos of the print and commented:
The layout and treatment are typical of English copperplate engraving. But I don't think I could pin this down to a particular works. The place to look would be at Musée de l'Impression sur Etoffes (MISE) 382. I have a few images taken back in 2005. Talwin P9 [my 015] and P67 [my 088]; and Munns S80 [my119] and S191 [my144-2] have similarities.  The album will hold many more images. Talwin & Foster and John Munns would be good candidates but that may be as far as one can go unless the MISE album holds the answer.

I contacted Jean Francois Keller, curator at the Musée de l'Impression sur Etoffes  who kindly looked in their English pattern books of this date. We have a little book of English prints in our library with prints on paper and also some big prints on paper from Merton and Bromley and some are in the style of your dress. The fabric of the dress is definitively English. We have paper prints in the style and they are said to be made in England  in Merton Abbey or in Bromley Hall around 1770-1775. M Keller kindly sent a photo of a print from one of their three English pattern books, which is quite similar (see last photo). We only have one with print similar to your dress. I looked all over the book twice and did not find your dress design and the 2 pictures I have sent are the closest to your dress. The company, which printed these, was Nixon & Co.

In 1752 Francis Nixon and Theophilus Thompson set up the Drumcondra Printworks in Dublin, Ireland, printing with copper plates. The business closed in 1757 and was bought by George Amyand, of Phippsbridge, Near Merton, Surrey who had established a printworks in 1752. Nixon joined him in 1757 and the company is listed in Mortimer’s London Directory of 1763 as Nixon and Amyand. Nixon died in 1765 and Amyand 1766 but the firm continued to operate as Nixon & Company until 1789 when it was sold.

The other printer who may have printed our gown fabric was Ollive and Talwin (1763-1783) of Bromley Hall printworks. The Bromley Hall factory on the right bank of the River Lea in East London was probably the largest of the early print works. It is first mentioned in the 1740s and was operated successively by members of the Ollive's, a Quaker family, who  had been dyers and calico printers since the late 17th century.

The V &A’s Bromley Hall pattern book really has no similar designs, but some prints have similar star shaped flowers which can be found on p 112 **

The gown came from the costume hire company Bakkers of Amsterdam, started in the 1860s. Mr Bakker previously worked at the Royal court in the Hague where he bought out of date gowns from aristocratic ladies, who would have been wearing current designs. The company closed some 10 years ago. It was on the Oude Zijds Voorburgwaal in the centre of Amsterdam.

The copperplates for this gown were 18 1/2 in; 47 cm sq.  The gown has been well made, unlike similar dated silk gowns. I assume this was because silk gowns were frequently unpicked, cleaned and re-made, due to the expense of the silk. Gowns of printed cotton or linen were more wearable for everyday tasks and needed to be better made and last longer. Few exist because they would have been handed down to servants when they were out of fashion, reduced to caracaos or petticoats and gradually worn out.

The Robe a la Anglais: The front with a deep square neck, a sewn in stomacher with curving ends (original), with hooks and eyes to the front, flanked by a 3 in; 8 cm pleat to cover the shoulder, the pleat extending to the hem, the back with square neck, with an inset band, one wide pleat flanked by two narrower down to the hem, the skirt with very tight cartridge pleats, the sleeves with double deep pleated cuffs 7 in; 18 cm deep. Lined with an open weave linen, the back skirt with a pocket for a lead weight and two linen ties, the neck and hem with a tape lining.

Excellent. Lightly soiled markings round the neck area. The lower right hand side also has an area of very light brown soiling, about 17 x 12 cm.  A small tear to the back right hand side, as you look at the robe, a total area of approximately 2 in; 5 cm square.  A little grubby at the hem. A 4 x 3 cm light brown stain near the back hem. I feel sure a conservator could remove all these light markings.

Although the 3 cm diameter lead weight is missing from the pocket inside the back of the gown, which would hold the bodice in place, I have one that I can provide.

My thanks to Philip Sykas, Manchester Metropolitan University, for being so generous with his knowledge and telling me about the Bromley Hall pattern books in the Musée de l'Impression sur Etoffes, Mulhouse, France.

My thanks to Jean-Francois Keller for looking through the pattern books of English copper plate prints in the Musée de l'Impression sur Etoffes, Mulhouse, France.

English Chintz . English Printed fabrics from their origins until present day. by Peter Floud  Exhibition at V & A May - July 1960.

Antiques 1957. USA magazine with 8 articles by Peter Floud and Barbara Morris on copper plate print designs. There is nothing similar, on such a small scale, as our gown print.

Jean Pillement spent a large part of his working life in England and his designs were first published in London. I thought I might find similar chinoiserie flowers as on the gown print, but no such luck. I would say they were inspired by his drawings.