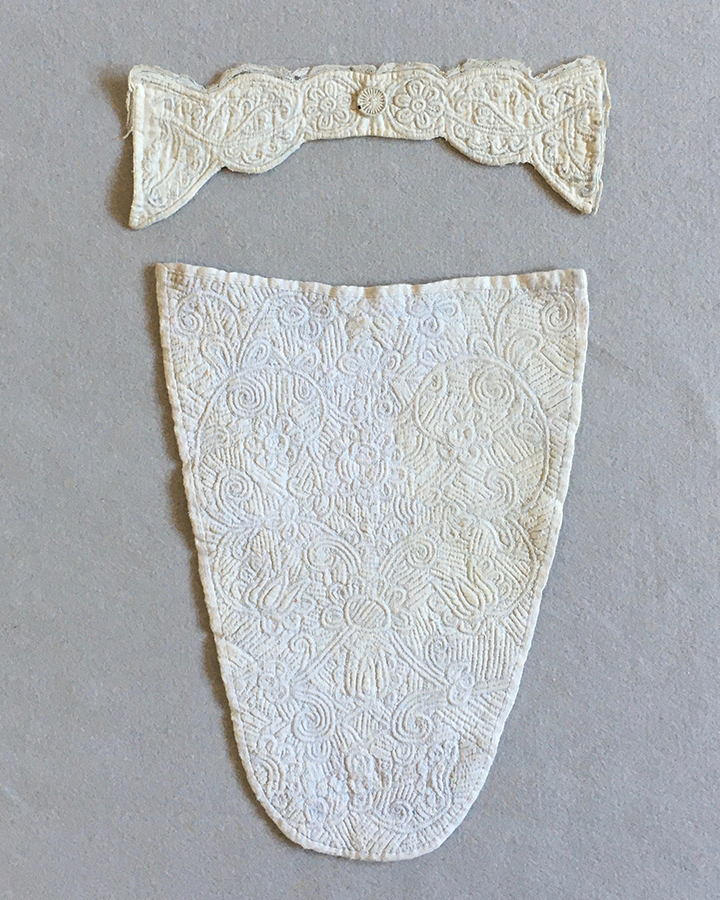 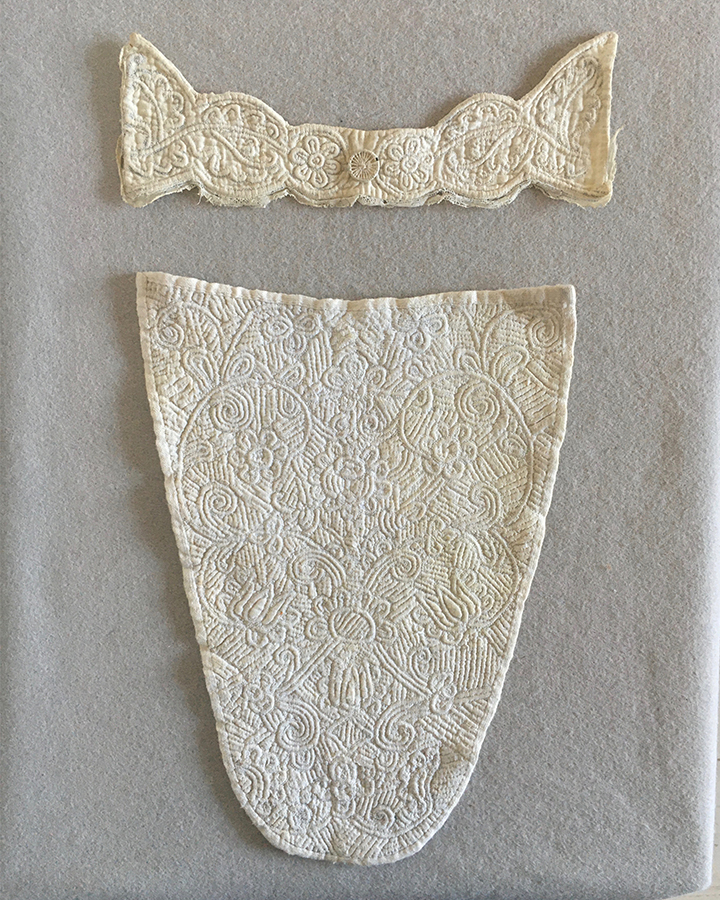 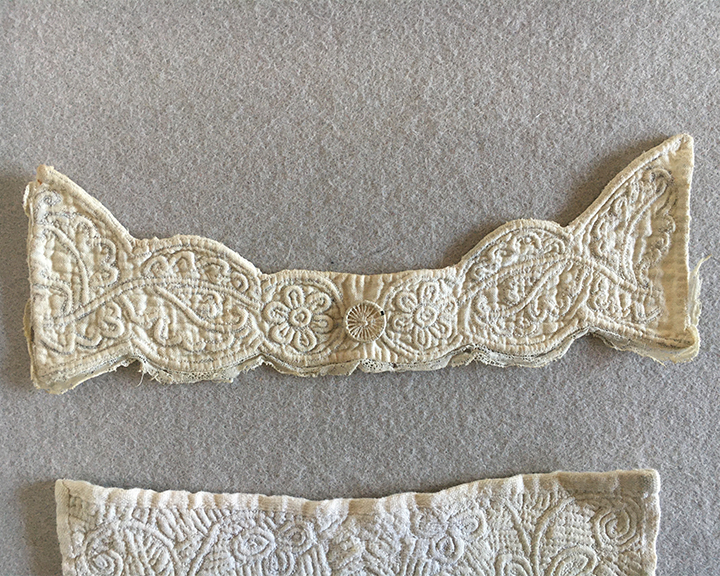 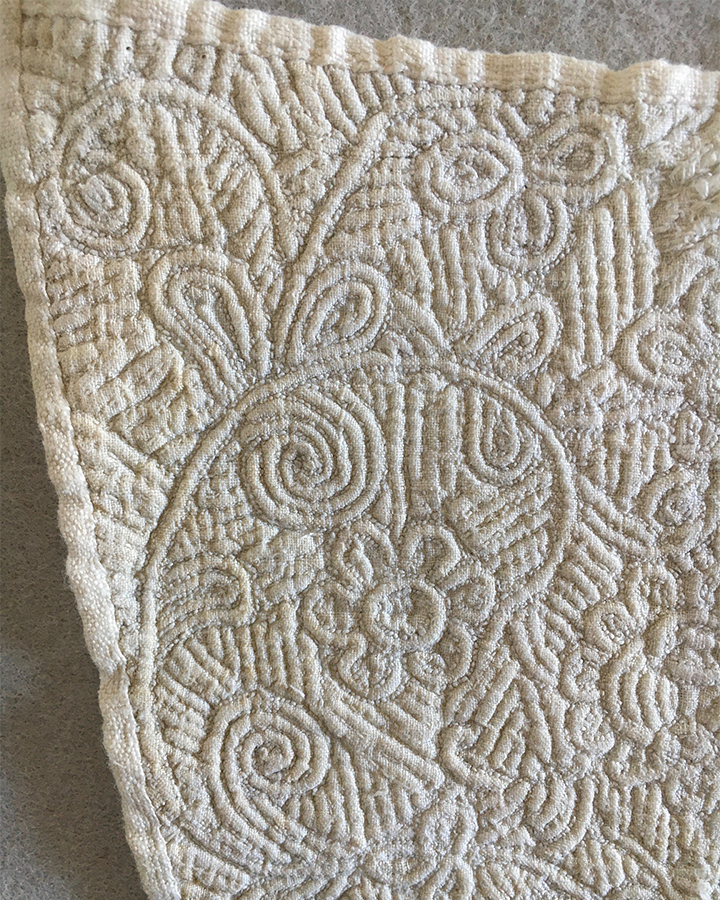 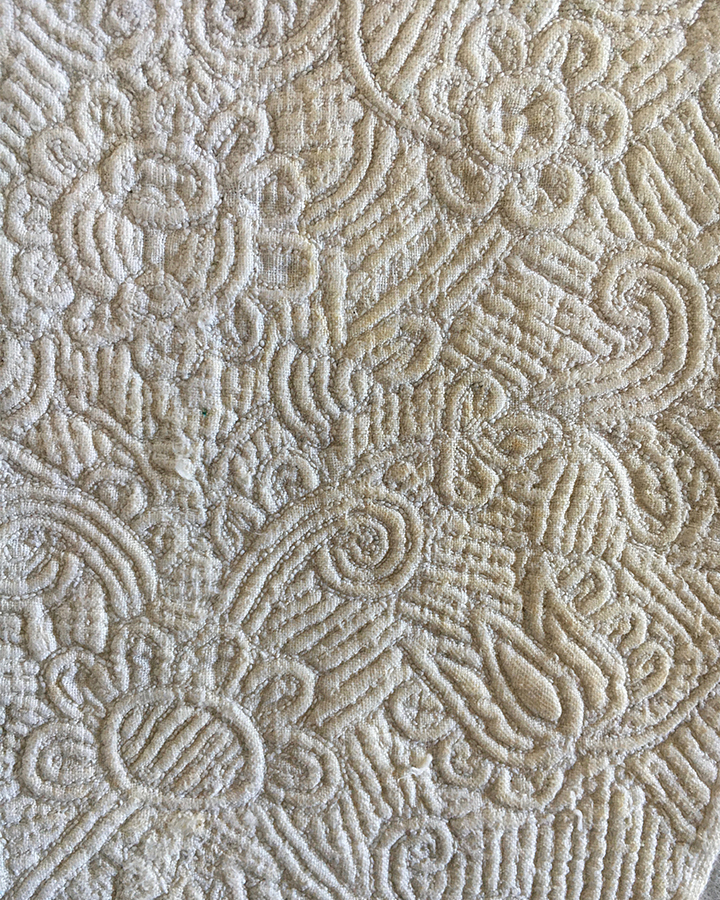 The quilting was purpose made and is fine and intricate. Stomachers were worn with whalebone stays which would have kept the bust flat. This type of stomacher would have been pinned to the the underside of the bodice. Unusual and very pleasing design. when you look at the back you can see the ends of the linen thread in little bobbles which is rather nice. It came with the shaped narrow piece or échelles (ladder), centred with a Dorset button, which overlaid the stomacher for a more elaborate effect.

This stomacher belonged to the late Margaret Watts.  Little is known about her except she bought needlework and dress. Her husband George had large collections ranging from cacti to 17th-century furniture. They both loved trawling through flea markets and auctions and finding things in ‘miscellaneous’ boxes pushed under tables. These interests led to the whole family joining the Sealed Knot, a British historical association and charity, dedicated to costumed re-enactment of battles and events surrounding the English Civil War. It was here that George made muskets and gun carriages, as part of the Trayne of Artillery, and Margaret made costumes.

The U shape stomacher with a symmetrical design of curving stems, stylised flowerheads including tulips,and a background of short infill lines, all worked in cord quilting on linen ground, the backing a coarser linen with cord tufts emerging, edged with linen braid.

The échelles with curved outer edges, with a central Dorset button flanked by six leaf flowers and leaves.the top and sides edges with narrow hand made bobbin lace.

Very good and clean. There are the slightest feintest marks to the left edge and to the right hand side. Photos always accentuate markings. They do not look as strong as this. The narrow strip is of a slightly more creamy colour than the stomacher, and presumably has not be washed. I would expect conservation washing would remove the slight markings.

Embroidered with white by Heather Toomer,  p 120-126 where you will find many examples of cord quilted stomachers.