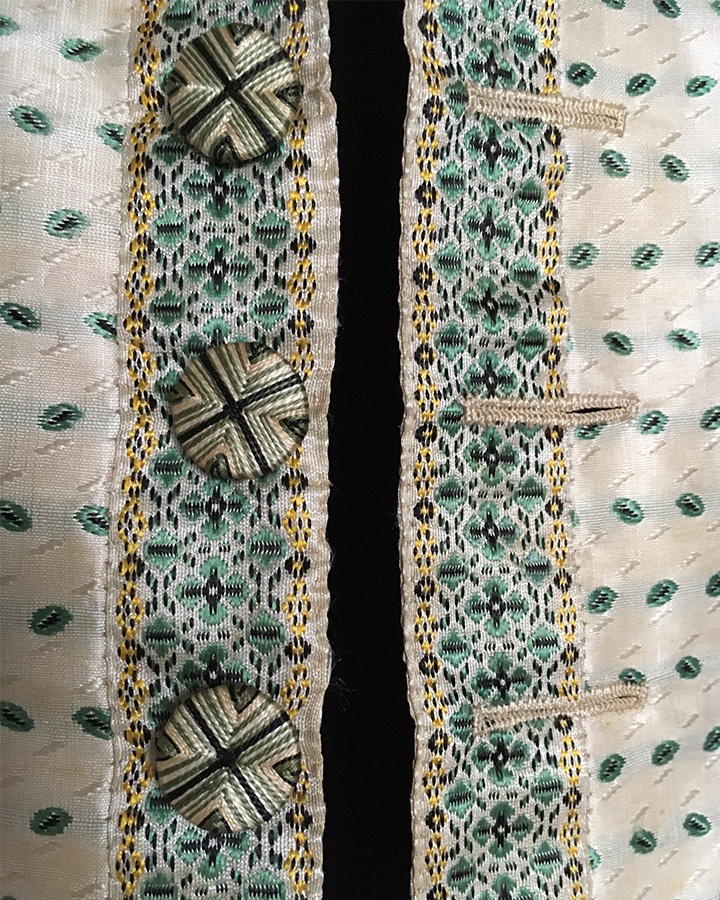 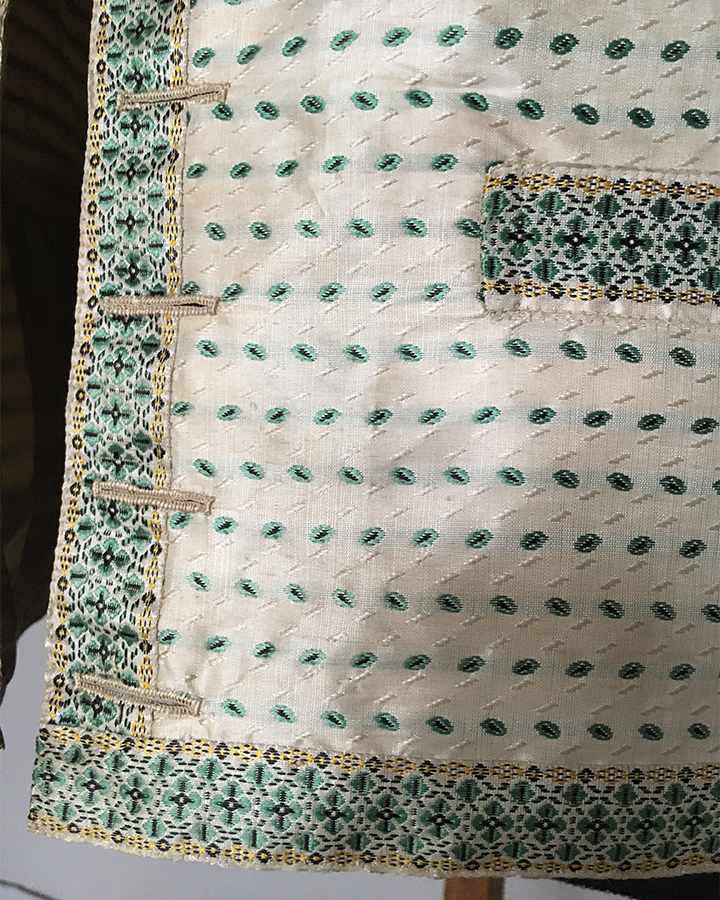 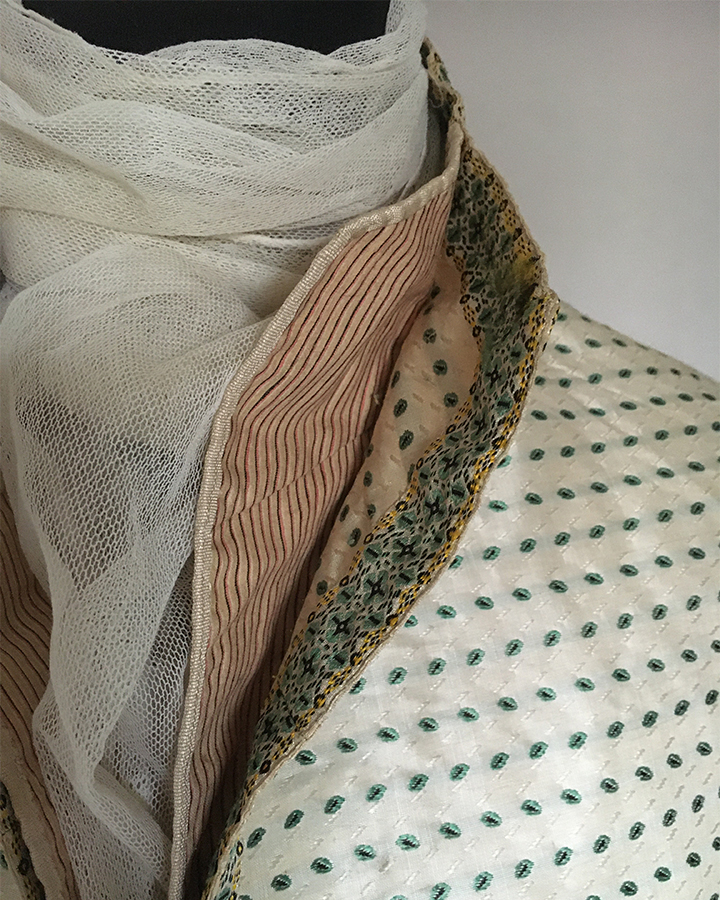 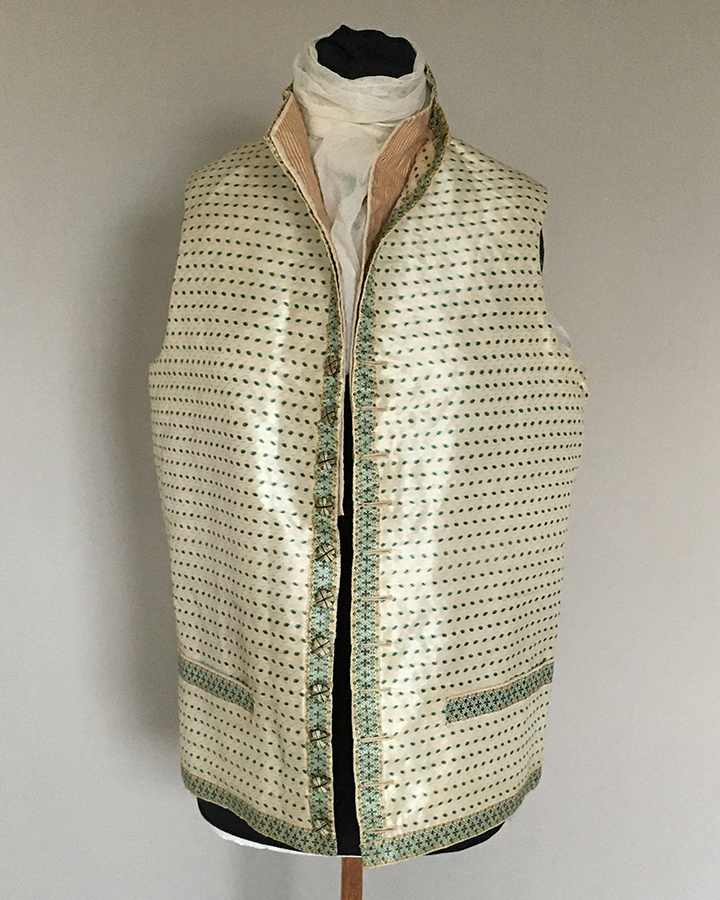 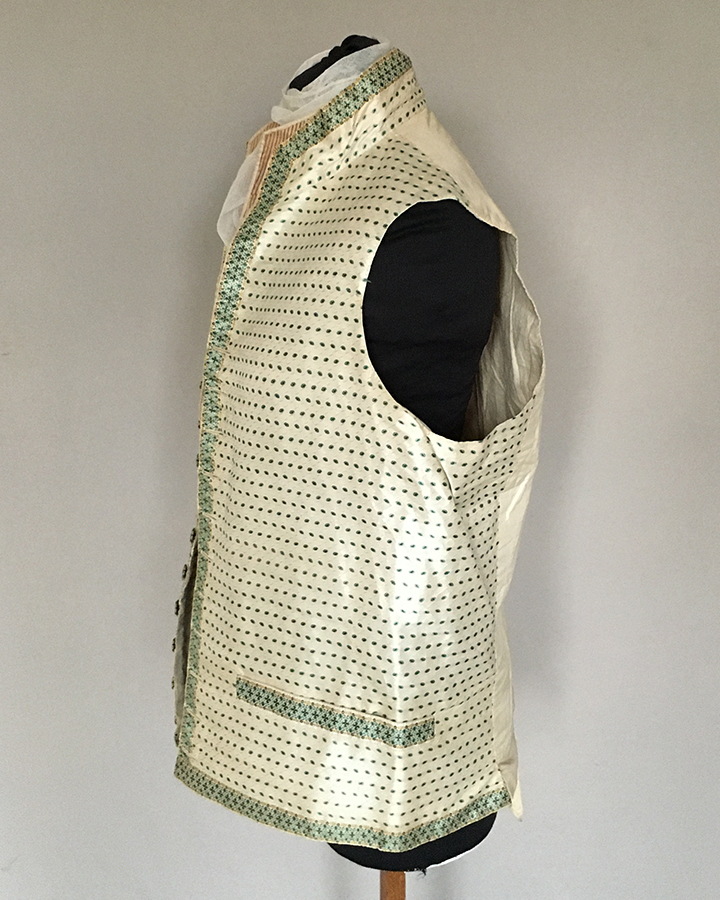 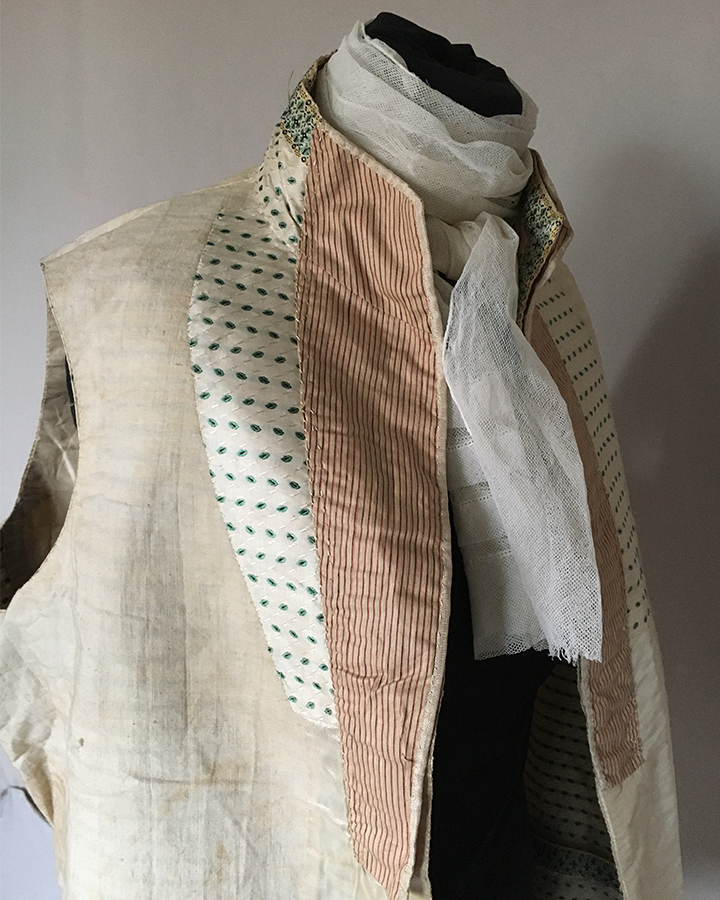 A stunning waistcoat with an almost irridescent peacock green, enhanced by the green braid and buttons. One should visualise this by candlelight. This would have been worn by Thomas Crewe Dod Esq (1754-1827) of Edge Hall, Malpas, Cheshire.

The waistcoat is very similar in design to one in the Victoria & Albert Museum's Dress Gallery, attributed to Maze and Steer of Spitalfields and dated 1788.   The square-cut shape, standing collar and welt pocket are characteristic of the waistcoat styles in the late 1780 and early 1790s. What is unsusual is the secondry revere.

Provenance:  This waistcoat came from the family of Thomas Crewe Dod Esq (1754-1827) of Edge Hall, Malpas, Cheshire. Thomas commenced his military career in the 16th (Queen’s) Light Dragoons as Cornet in August 1775 when he was 21.  He went to America with his regiment in August 1776, under Lieutenant George John Burgoyne. Promoted to Lieutenant in 21st regiment of (Light) Dragoons. He was gazetted captain in the 23rd regiment of (Light) Dragoons in 1781. His regiment were the first to land in India in 1782 and on 27 July 1785  Dod was promoted to major. He eventually  resigned from the Army in 1788 to return to his Cheshire estates. He took part in the formation of the Cheshire Provincial Cavalry  in 1798 and was commanding officer of the Western Cheshire Yeomanry raised in 1803. He married Anne, daughter of Ralf Sneyd of Keele, Staffs on 20 September 1786 when he was 32.  They had six daughters and two sons. The sons also interest us because some of the waistcoats and breeches bought would have been worn by them. Thomas (1794 – 1810) who died unmarried  age 16 and John Anthony (1821-1798) who died in India aged 23.  Due to the size of the waistcoat it would have been worn by the father.

The high standing neck 2 1/2 in; 5.5 cm , the inner revers in pink, white and black woven fine stripe on a pinky beige ground,  edged with pinky beige narrow silk tape, the waistcoat of ivory brocade with rows of small peacock green ovals with black centres, on a ivory ground woven with a minute slanting self weave stripe, the neck, front, bottom and slit pockets edged with a complimentary braid, eleven buttons of similar coloured silks probably worked over a flat wooden core, the design being quarterred with silk threads laid side by side.the back of ivory silk twill weave, lined in cotton.

Excellent condition apart from the inside collar at back of the neck. Here it is grubby and there are what I would think are two small blood marks. The lower front right hand side has a 1.5 cm mark of pale pale brown.

Their pattern book of “Fancy Vestings and Handkerchief Goods” in the Museum’s collections (Museum no. T.384-1972 )and T.89-1924 features similar designs, and those woven in 1787-9 are similar to this design.