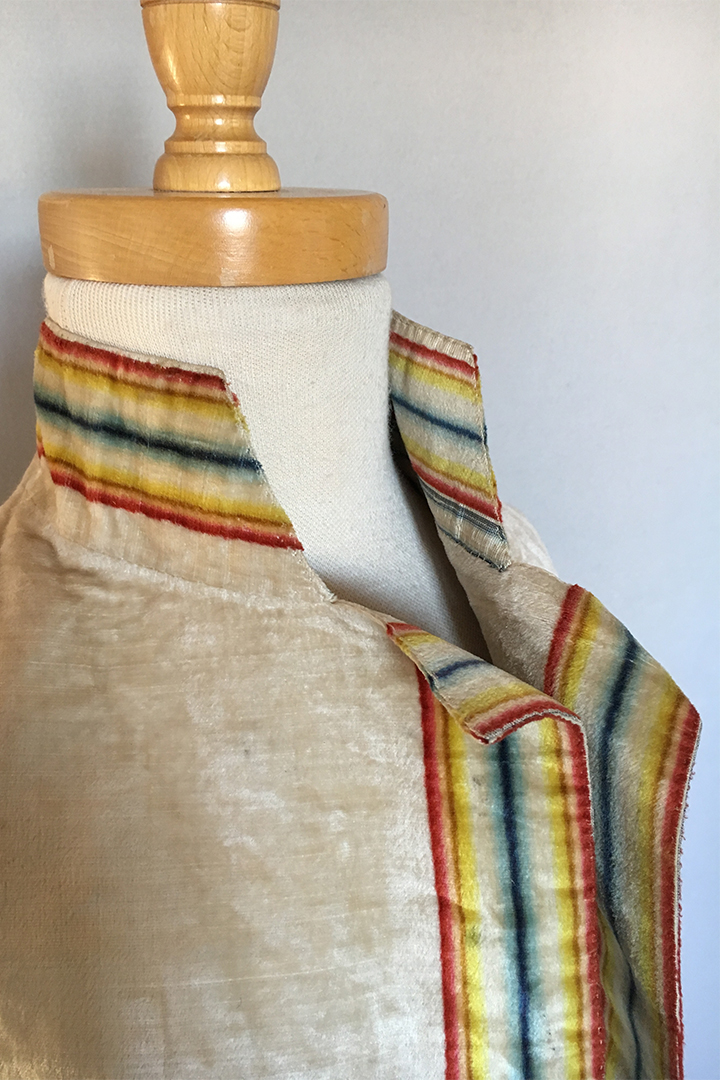 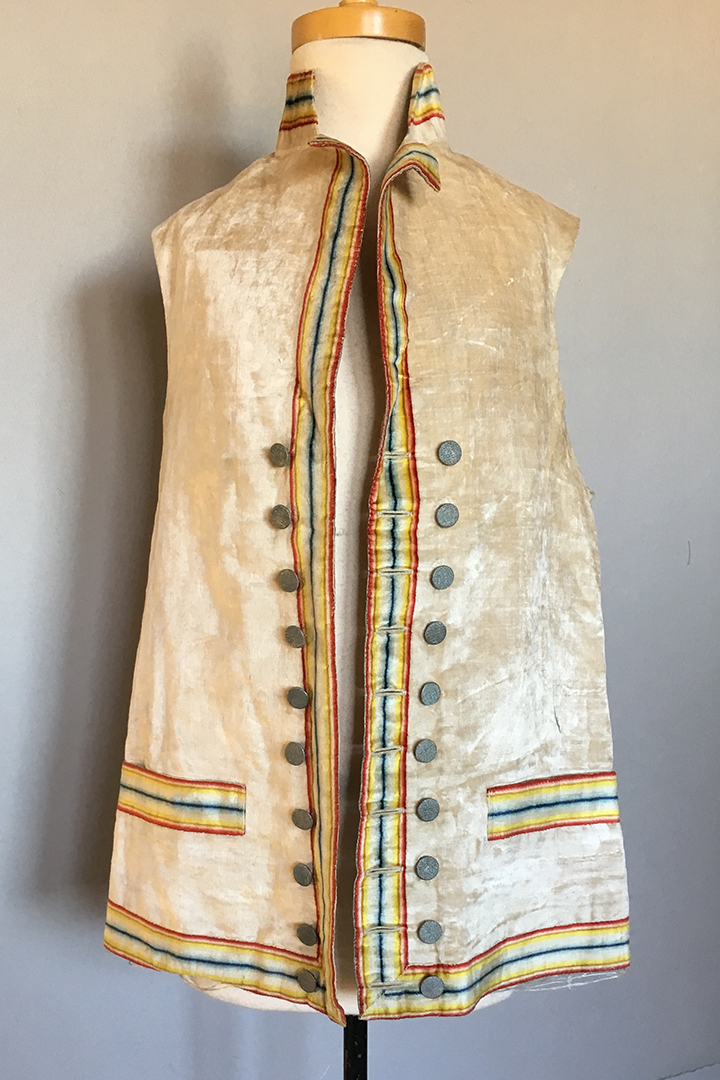 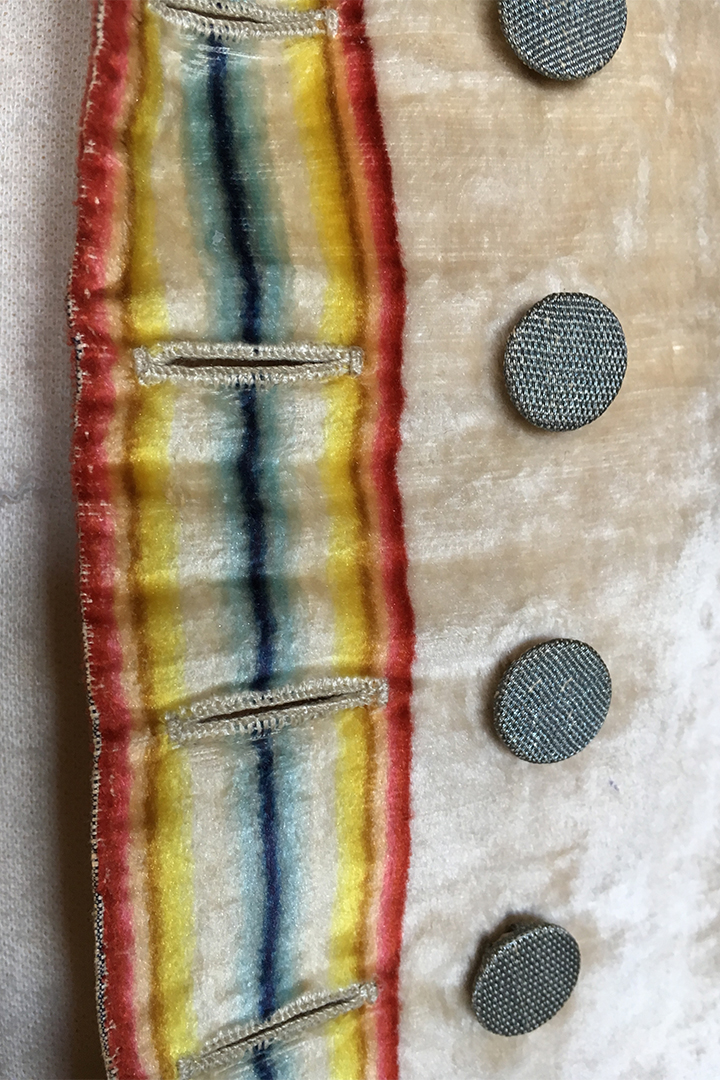 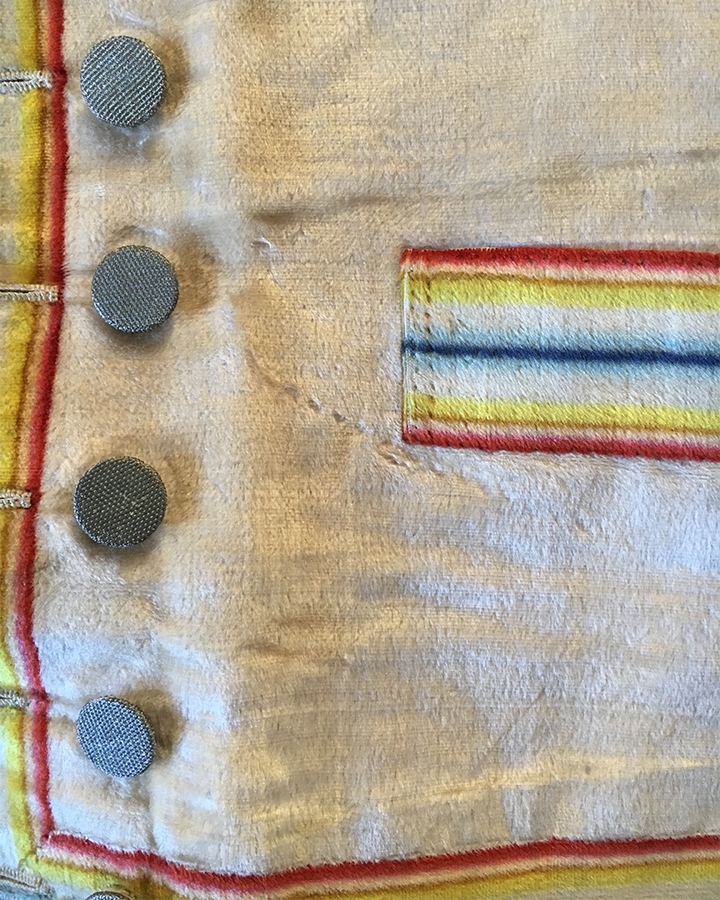 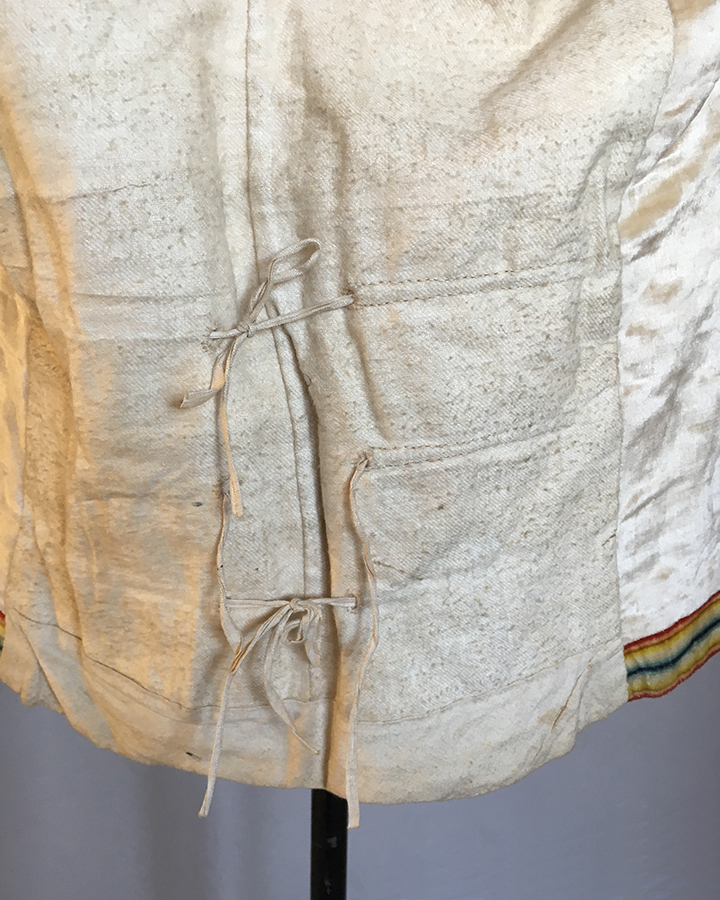 Very unusual being velvet with stripes. The fabric would have been woven with the stripes down the sides (selvedges). The waistcoat has made clever use of the stripes by using the selvedges for the front and the upturned collar, then cut further stripes to stitch to the pockets and botom of the waistcoat. A nice touch is where you can see the blue and ivory striped selvedge on the inside of the collar.

A waistcoat belonging to the Woolaston White family. We also had a gentleman's wool suit of the same period, which sold recently.

Sir Nicholas White and his son Mr Christopher White, direct descendents of the wearer, sold this suit and waistcoat.   Mr Christopher White told me We are not able to identify the suit’s exact owner. However, I would strongly suspect that the owner was indeed our great  grandfather, Sir Thomas Woolaston White,1st Baronet of Tuxford and Wallingwells, Nottinghamshire (1767-1817). The only other possible owner would have been his father Taylor White (1743-1795).  Given the rest of the collection of uniforms and clothing they own, dating from Sir Thomas’s time and of his descendants, and not earlier, it is most likely that the suit was worn by him (the 1st Baronet).

Mr Christopher White continued: As for Sir Thomas’s size, we do not know for sure his exact proportions, but the majority of the uniforms in the collection were of a very small size when compared to men of the twentieth first century. I think he will have been about 5 feet 9 or 10 inches tall – possibly a little more, and of average (modern) build. One of the only coats / jackets which would fit me with any comfort was the scarlet jacket with black and silver facings (also sold at the same auction), which is depicted in the half-length portrait of Sir Thomas. My chest size for jackets is 38 inches. I think that uniform jacket was probably around 37 inches around the chest. I never tried on the coat of your suit though. If the approximate sizing seems appropriate, it would probably indicate that the suit was indeed Sir Thomas’s. The coat fits a 38 in chested man of around 5ft 10in.

The 1st Baron, Sir Thomas had an early military career but returned to look after the family estates. When there were fears of an invasion from Napoleon he created his own militia based on his estate. George III thanked him with a baroncy.The militia became fully fledged corps of which he was colonel hence the portrait.

Mr Christopher White continued: The portrait you mentioned will have been painted sometime after 1802, when the baronetcy was granted to Sir Thomas. The exact date is not known. However, in the two years after the grant of the baronetage, Sir Thomas was active in having his achievement of arms (coat of arms) and pedigree updated to recognise his title. It is therefore very possible that the portrait dates from the early to mid-1800s. The rank on the uniform would give a good indication of this – something I would have to try and look into. We know that he was promoted Captain in the Sherwood Rangers Yeomanry Cavalry in November 1803.

The uniforms and other clothing were definitely kept at Wallingwells, the family seat, until its sale. They have always remained in the possession of the reigning baronet, so a definitive line of descent known.

The ivory silk velvet with low stand up collar and raised turnback revers, the double breasted front with ten silver coloured fabric covered buttons each side and ten hand made buttonholes, the stripes continuing around the bottom of the waistcoat, the pocket welts similar, the lower inside of twill weave ivory silk, the lining and back of fulled cotton, three linen ties to the back.

The silk lining at the hem is split and fraying, but feel sure a conservator could easily sort this. There is a slight grey line about 1 in; 2.5 cm long to the lower right of the waistcoat,  just above the pocket, almost like a pencil mark.  There are slight markings in a few places almost as if something has been put on the velvet pile. Again I would imagine a conservator could steam these out. The back is a little grubby.