A 'slip' is an embroidered motif, often a plant or flower with foliage, the stem with a small heel or root attached. Sometimes different fruit and flowers are shown on the same stem. Embroidered 'slips' acquired their name from gardeners' ‘slips’ or cuttings. To propagate a plant the gardener takes a cutting with a diagonal heel, potting up the cutting to form a new plant. These embroidered motifs were popular on bedhangings from the mid sixteenth to the mid seventeenth centuries.

A middle class had emerged during the sixteenth century, partly based on trade. After the dissoluton of the monastries* many became rich when Henry VIII dispersed monastic lands and gave to his favourites.  Prior to this embroidery had been worked for ecclesiastical purposes, but was now worked for the adornment of the home. The new rich furnished their homes to display their wealth. The Elizabethan home was designed with a greater eye for private comfort than in previous houses. Rooms were smaller and easier to keep warm. The bed had always been the most important piece of furniture in a house with the bed hangings as sumptous as the owner could afford. Bedhangings and valances, coverlets, cupboard cloths and oblong cushions, mirrors and pictures were embroidered by professionals, but also by woman and girls at home for their own use. There were very few window curtains at this time. Bedhangings embroidered with ‘slips’ kept draughts out and enhanced privacy.

‘Slips’ were embroidered in wool and silk on linen canvas using tent**, cross and, less often rococo stitch. They were then cut from the linen ground and applied to a wool or velvet background. The quality of the embroidery is usually very high, woman being taught needlework from an early age, partly as a practical skill but also as a refined accomplishment. Many hundreds of small ‘slips’ could be applied to a single hanging. Often charmingly naïve in design and out of scale, they depict identifiable plants, insects or animals and are accurate in their rendering. 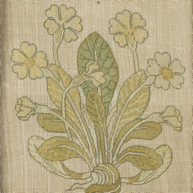 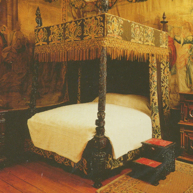 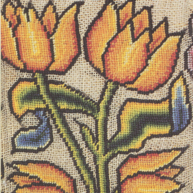