The Omega Workshops were founded in 1912 by Roger Fry, an artist and influential art critic, later to become one of the Bloomsbury Group. This group of artists, writers and philosophers lived in or around Bloomsbury in Central London and were noted for their unconventional lifestyles. Fry's aims were to improve British taste in the decorative arts, to widen the taste for artistic products and to employ struggling young student painters.

Fry established the Omega Workshops as a challenge to the perceived dullness and formality of interior decoration, seeking to energize the decorative arts by promoting a more spontaneous and painterly approach ... to keep the spontaneous freshness of primitive or peasant work while satisfying the needs and expressing the feelings of modern cultivated man

The Workshops opened on 8 July 1913 at 33 Fitzroy Square, Bloomsbury, London to cautiously enthusiastic reviews. At the opening Princess Lichnowsky, the German Ambassador's wife, named the six printed linens which had been produced by the Workshop: Mechilde, designed by Frederick Etchells, she named after herself, Margery, designed by Roger Fry and Pamela, designed by Vanesssa Bell, after Fry's sister and daughter. Maud designed by Vanessa Bell, named after Lady Maud Cunard is featured here. Fry’s friends Duncan Grant and Vanessa Bell were co-directors. Twenty “artist decorator”, students from the Slade School of Art were employed, but so as not to be distracted from their painting, were only allowed to work less than three and a half days a week. Edward Wadsworth, Jessie Etchells, sister of Frederick, and Nina Hamnett were some of the students who later became famous. Edward Wolfe, one of the last artists to join the Workshops recalled that the Omega was an extremely colourful and creatively exciting place, with an atmosphere that encouraged the artist to pick up and decorate whatever came to hand.

The keynote of the Workshops was spontaneity. Fry’s ambition was for the artists to become multi talented, designing furniture, ceramics, book illustrations, as well as painting and sculpture, rather like the artists of the Italian Renaissance. He felt that objects and furniture should be bought for their aesthetic qualities rather than the reputation of the artist, so he insisted that all the work was anonymously produced. Designs were unsigned and marked only with the symbol O or Omega, the last letter of the Greek alphabet. During the 19th century Omega was used to mean the last word on a topic. 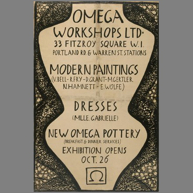 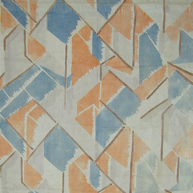 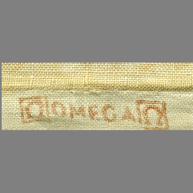