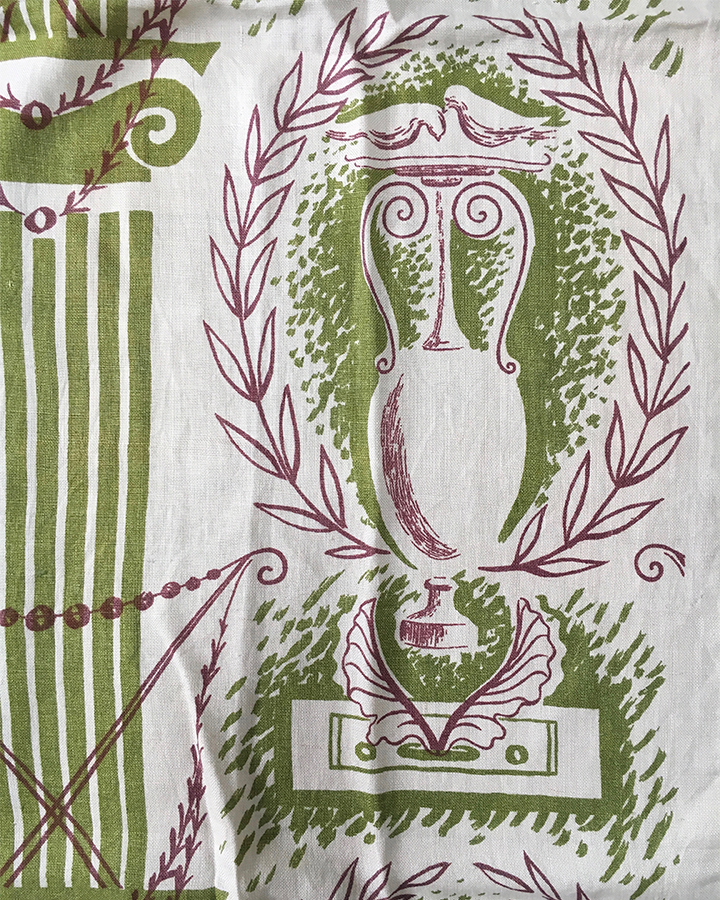 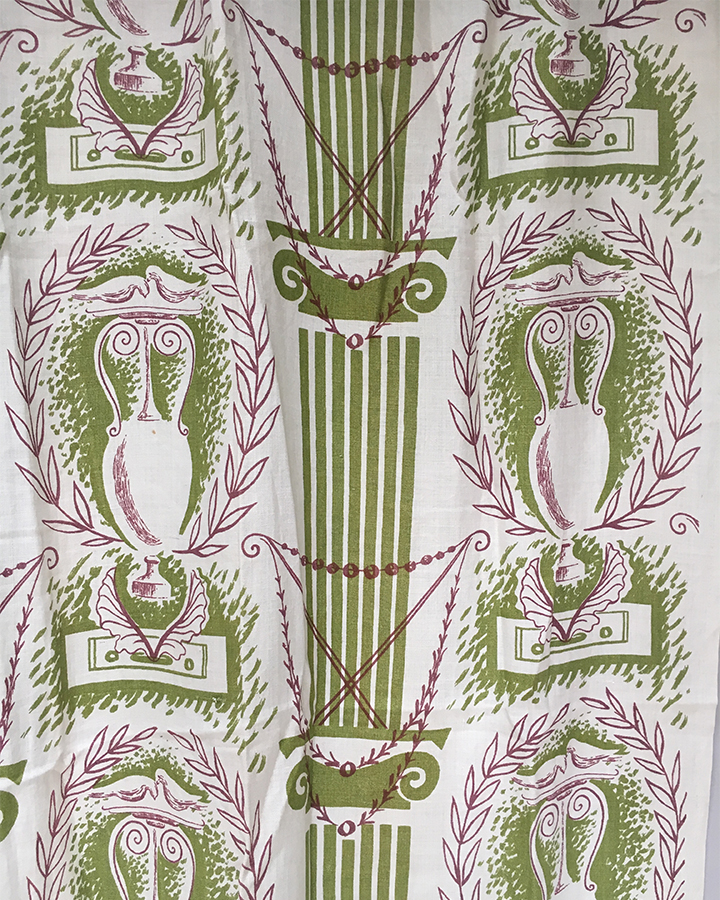 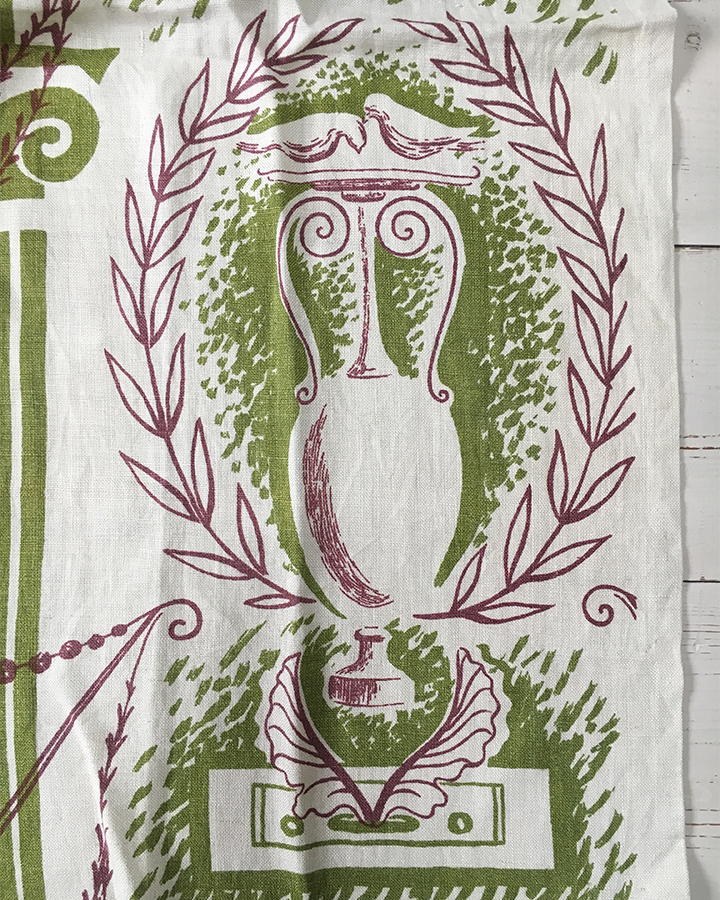 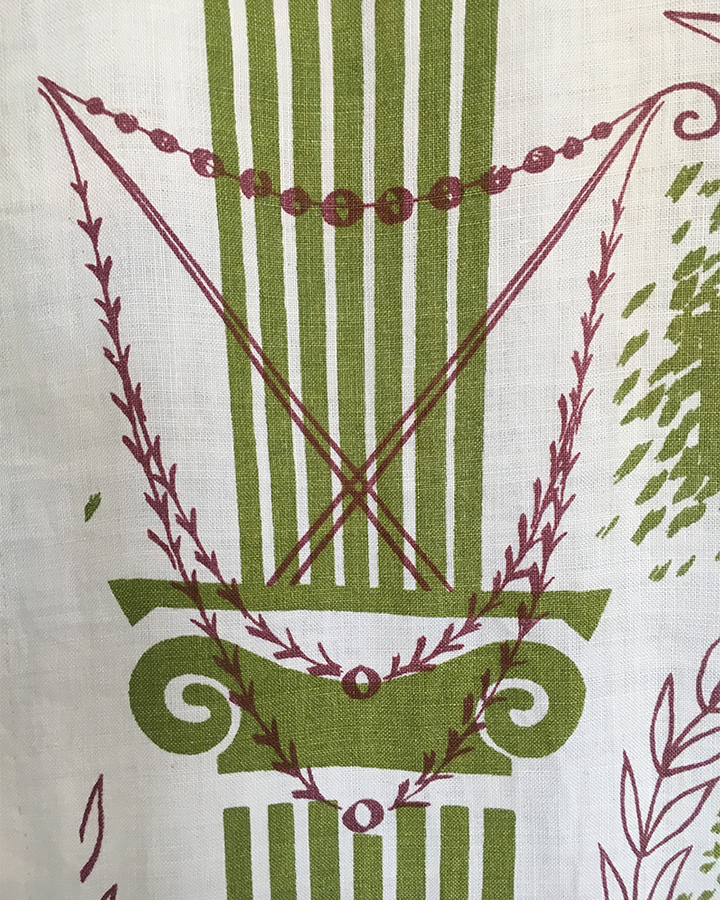 Sheila Walsh for Alan Walton Textiles. This furnishing linen is of a very good quality and weight. They are hand silk screen printed. These are wonderful. So stylish and great colours. There are four lengths which could be used as wallhangings or curtains. I want to sell all four together. Nothing is known of Sheila Walsh.

Alan Walton (1891-1948) was born at Cheadle Hume, Cheshire. He lived with his widowed mother and three siblings at Netherlea, Bramhall Lane, Bramhall, nr Stockport. Allan abandoned his architectural studies and learnt to paint under Stanhope Forbes (1857-1947) in Cornwall, then studied at the Slade School of Fine Art 1913-1916 followed by at the Académie de la Grande Chaumiere in Paris, and finally at the Westminster School of Art under Walter Sickert (1860-1942). A painter of still life, landscape and seascapes, he took a studio in Cheyne Walk, Chelsea in 1919 and exhibited at small London galleries and was elected a member of the London Group in 1925.   He had his first solo show at Beaux Arts Gallery in 1928 and another at Arthur Tooth & Son Gallery in 1933. He also had exhibitions at the Wertheim Gallery, Leicester Gallieries in London, the Walker Art Gallery in Liverpool . Sally Hunter Fine Art, London held several exhibitions of his work in the mid 1980s.

Walton undertook industrial commissions with designs for textiles and carpets, ceramics, electric fires and furniture and became interested in interior design and restoration of old buildings.  He designed the anteroom to Fortunum and Mason's New Contemporary Decoration Department in 1932.   The family's textile firm in Collyhurst in Manchester provided Walton with experience of the industry and in 1931, with brother Allan Roger Walton, they set up Allan Walton Textiles. At the first exhibition of Walton fabrics at the London Artists Association Show designs by Vanessa Bell and Frank Dobson, Duncan Grant and Walton himself were shown. He went on to commission other artist designed screen-printed fabrics. which pioneered new ground in printed cloth designs. The decorative textile designs which Walton's firm produced are considered to be among the finest of their type, and Walton was elected one of the first Royal Designers for Industry. He became associated with the Bloomsbury Group and supplied all the textiles for Maynard Keynes's rooms at King's College Cambridge. In 1933 the firm's fabrics were used in  BBC offices and on the liner Orion  and exhibited at the British Art In Industry exhibition,1935. In the 1930s Walton became artistic director of Edinburgh Weavers, part of Morton Sundour Fabrics Ltd and in 1940 he became one of the first members of the Faculty of Royal Designers for Industry, a member of the the Council of Industrial Design and a member of the Design & Industries Association.

The firm closed at the outbreak of the Second World War. in 1940.  Walton was director of the Glasgow School of Art 1943-1945 and in 1948 appointed professor of design at the Royal College of Art but died before he could take up the position.

Each length with a double vertical design of a segmented classical Doric column beside two handled Grecian vases within leaf sprays, in subtle lime green and burgundy on a white linen ground, the tops gathered with rufflette tape.