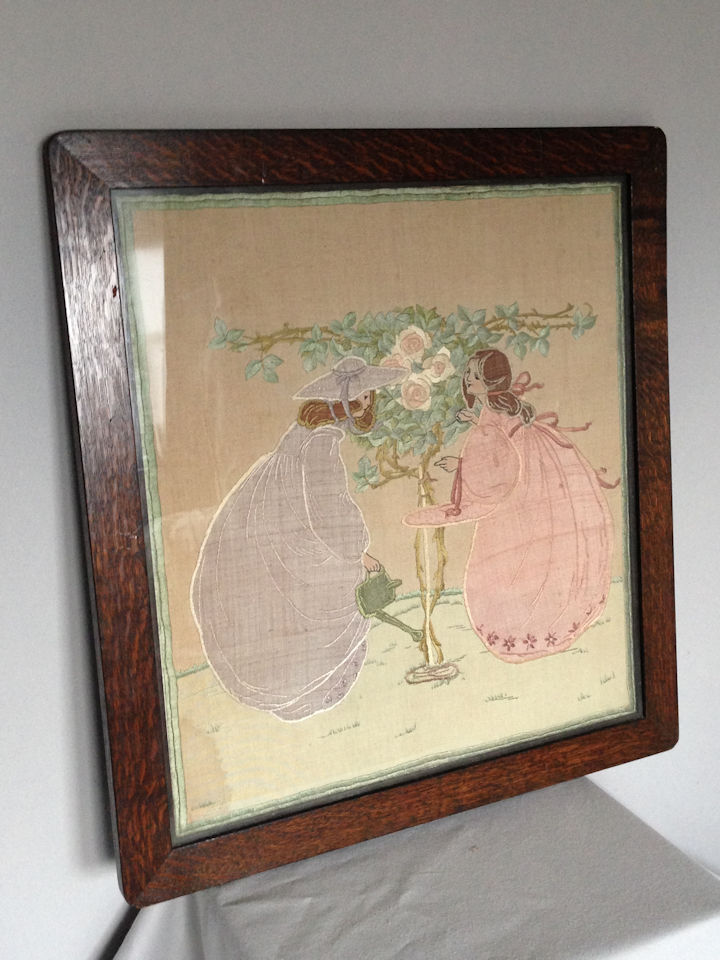 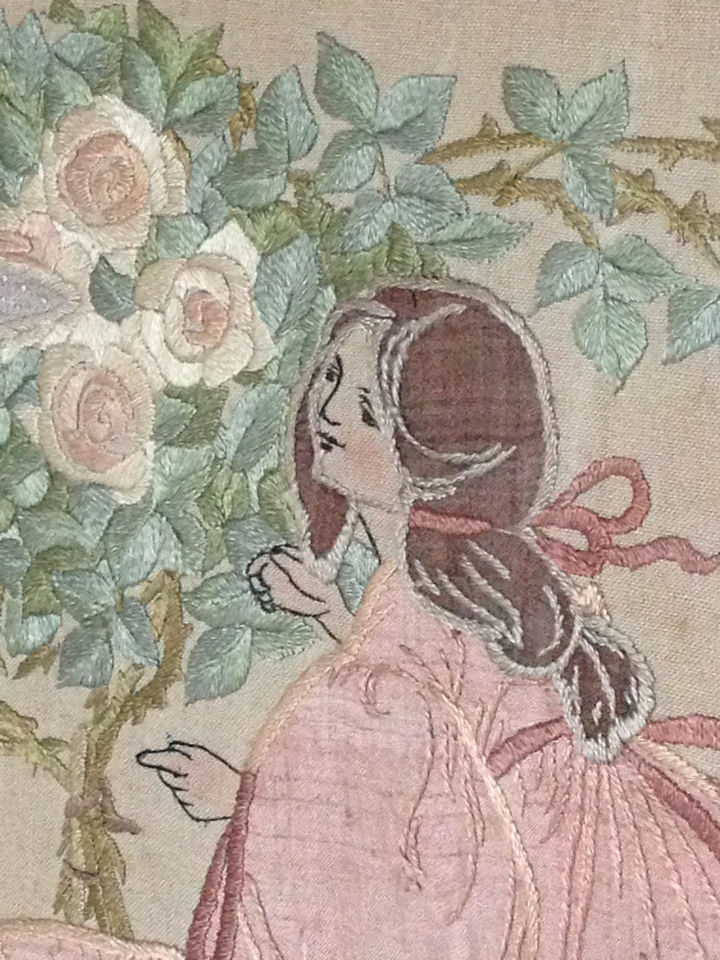 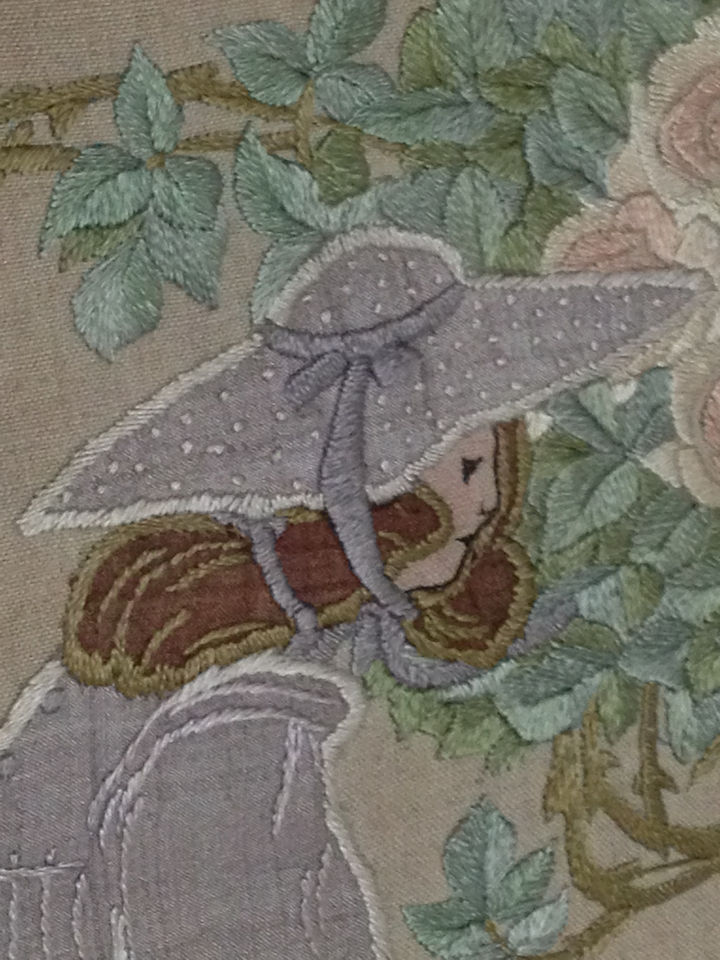 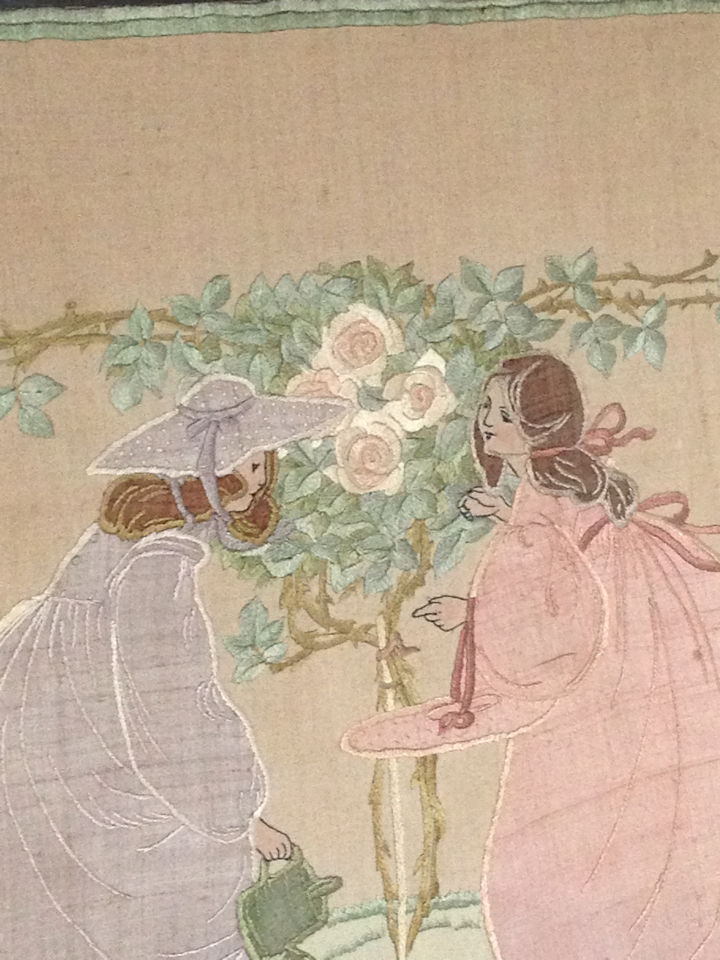 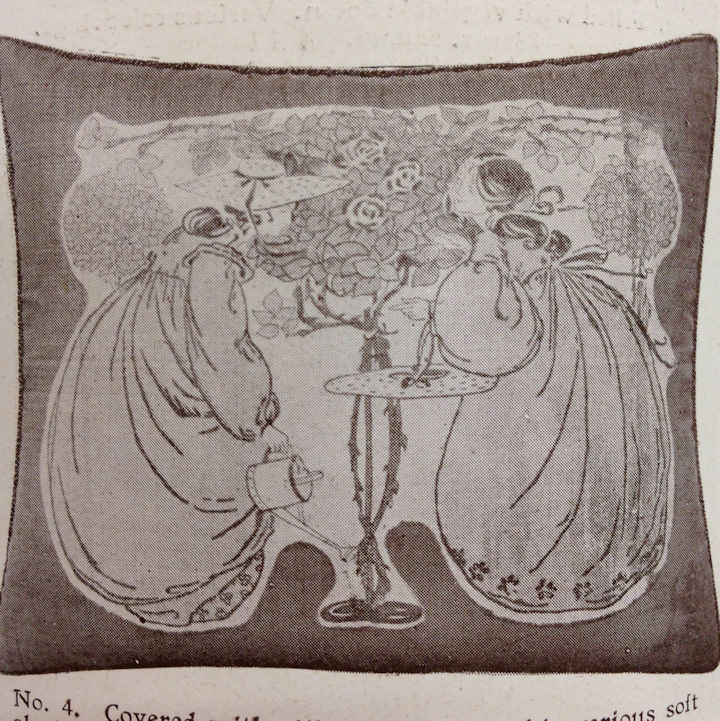 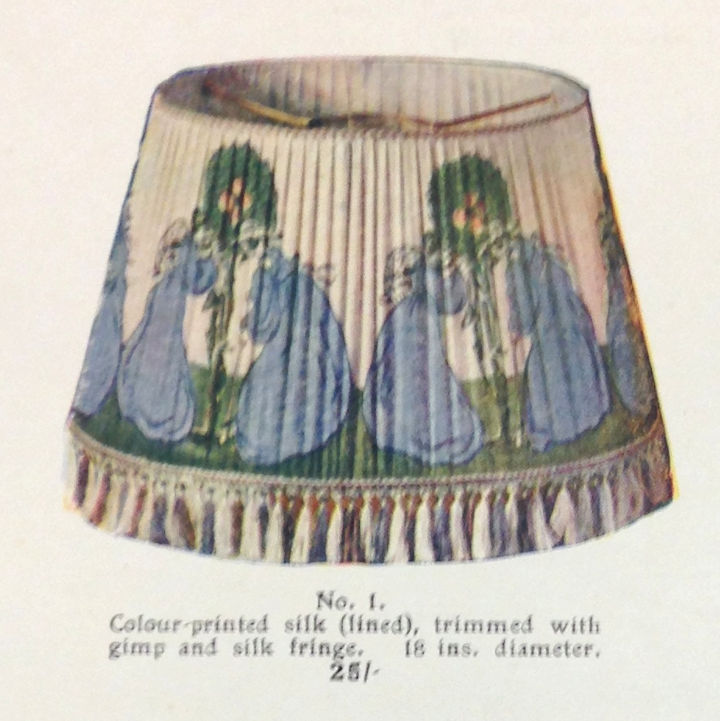 Ann Macbeth was born in Bolton, Lancashire. She enrolled at the Glasgow School of Art in 1897, two years later won a prize for needlework and in 1901 was appointed assistant to Jessie Newbery. She took charge of the embroidery classes at the School of Art in 1908. Her work was highly regarded and publication in contemporary magazines included an appreciation by Francis Newbery in The Studio in 1902.

She also taught metalwork, bookbinding and ceramics and, as a freelance artist, produced designs for jewellery, carpets and textiles. Her book Educational Needlecraft (1911), written with Margaret Swanson, was one of the most forward-looking texts written on the craft. It based its exercises on the developing co-ordination and eyesight of children whilst fostering originality and innovation.

In 1912-3  in Liberty's Yule Tide Gifts catalogue I found similar designs, which were printed and with two additional trees to the sides. There is a nightdress case and lampshade which have a central tree but not quite the same design.

In 1907 cat there is reference to a cushion square in art linen appliqué and prepared for working with full supply of materials to finish, 24 in sq. £1 10s.  This sounds as if it was linen on linen and with silks for embellishment, so not like mine.  My feeling is that the silk used for the dresses and hats, would be too difficult for most home embroiderers.

In Liberty's 1875-1975  ' Liberty's greatest triumph in those early days came from a co-operation with Thomas Wardle, the dyers and printers of Leek in Staffordshire, who also worked for William Morris. Between them, Liberty and Wardle introduced dyes which had until then been supposed to be a closely guarded secret of the East....delicate pastel tints which they called 'Art Colours', and that became described all over the world as 'Liberty colours.' Silks in Liberty colours were an influential element in the Aesthetic Movement. Liberty's windows became one of the sites of Regent Street...a revelation to a generation accustomed to the harsh colours of aniline dyes...'.* My guess is that the silks used for the dresses and the skeins of silk were from Thomas Wardle.

Two young girls standing either side of a rose bush, one in a mauve dress and large brimmed hat watering the central rose bush with a small green watering can, the other in a pink dress, holding her hat and smelling the roses, the entwined thorny trunk with leaf laden branches and four central pale pink roses, their dresses in tussor (tasar) silk embroidered at the hem, their brown hair also of tussor silk, embroidery in thick soft shaded floss silks 'art colours', their faces painted, the background natural linen, edged with a double green embroidered  line, blue ink markings tracing the embroidery under the design, 23 1/2 x 21 in; 60 x 55 cm, original simple dark oak frame, the reverse with Liberty London.

Excellent apart from the lower left hand corner has what is possibly a water mark which is light brown. 2 1/2 in; 6 cm.

*Liberty Design, Morris , Barbara.
p 57  states: The most original ….were those commissioned from Ann Macbeth…..applique and embroidery…with ladies in artistic costume. Some could be ready worked. It says Liberty’s sold her transfer designs for people to work. This one has used art silks, tussore, for the appliqué, presumably Wardle dyed? The quality of the work is very very good, with lovely faces and hands,  so wonder if this was a ready worked one and if so do you know who would have embroidered/applique them?

Liberty Yule Tide Catalogues 1912-13 for similar but not same designs.

This belonged to Mr Lionel Wilton of Cardiff, who purchased the piece in 1975 form an antique shop on Ealing Green. He knows nothing about it's provenance.