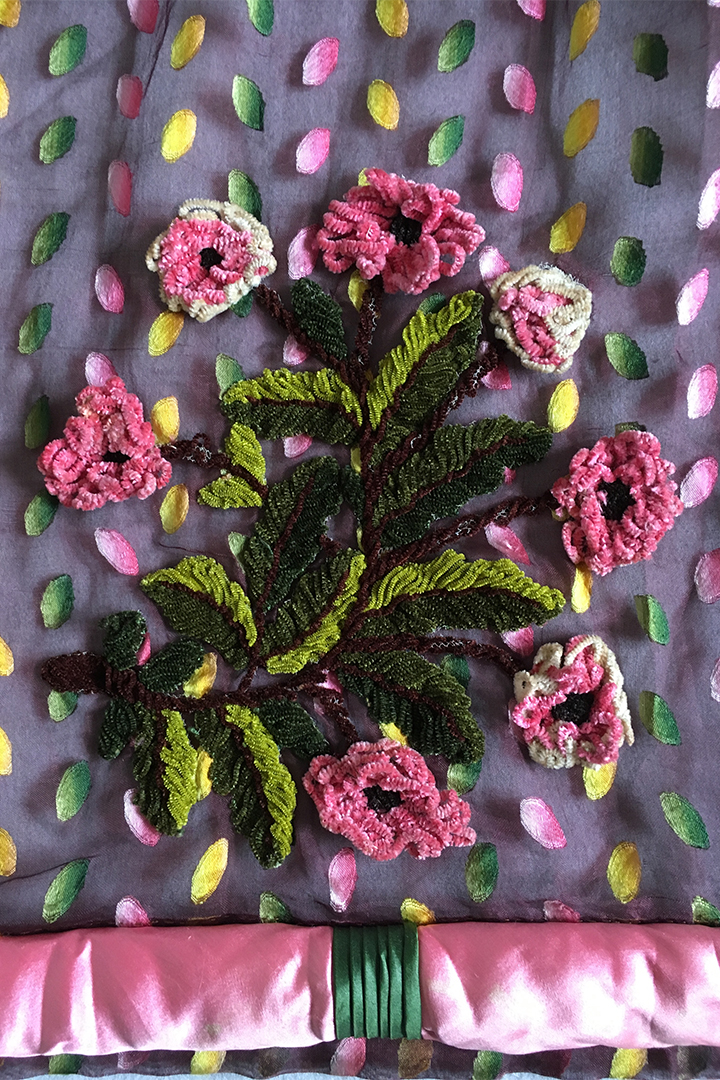 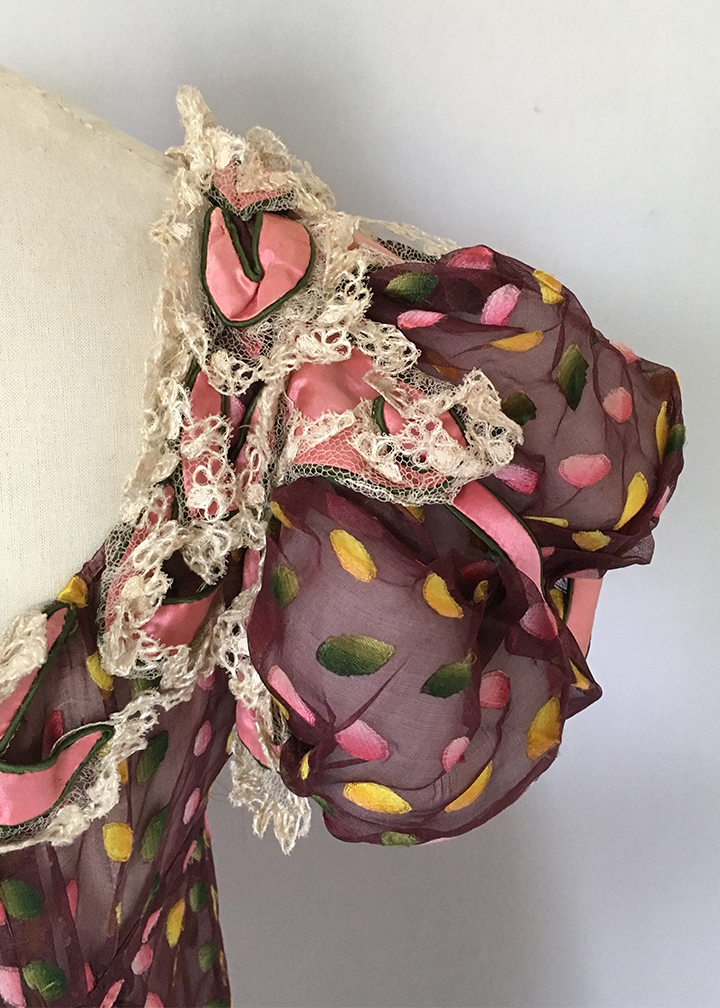 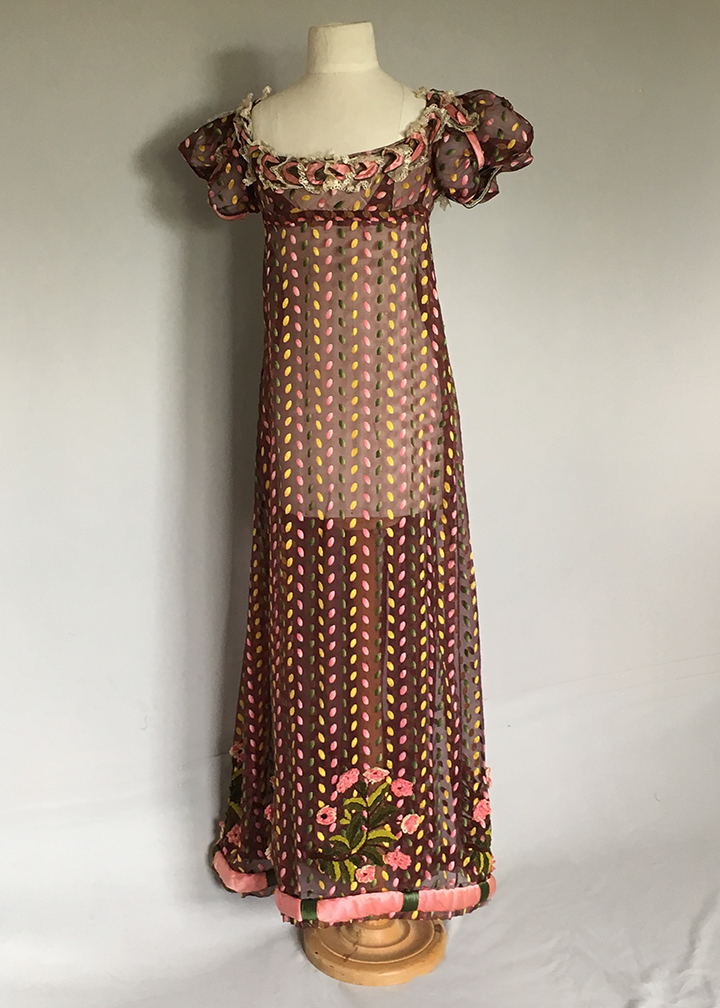 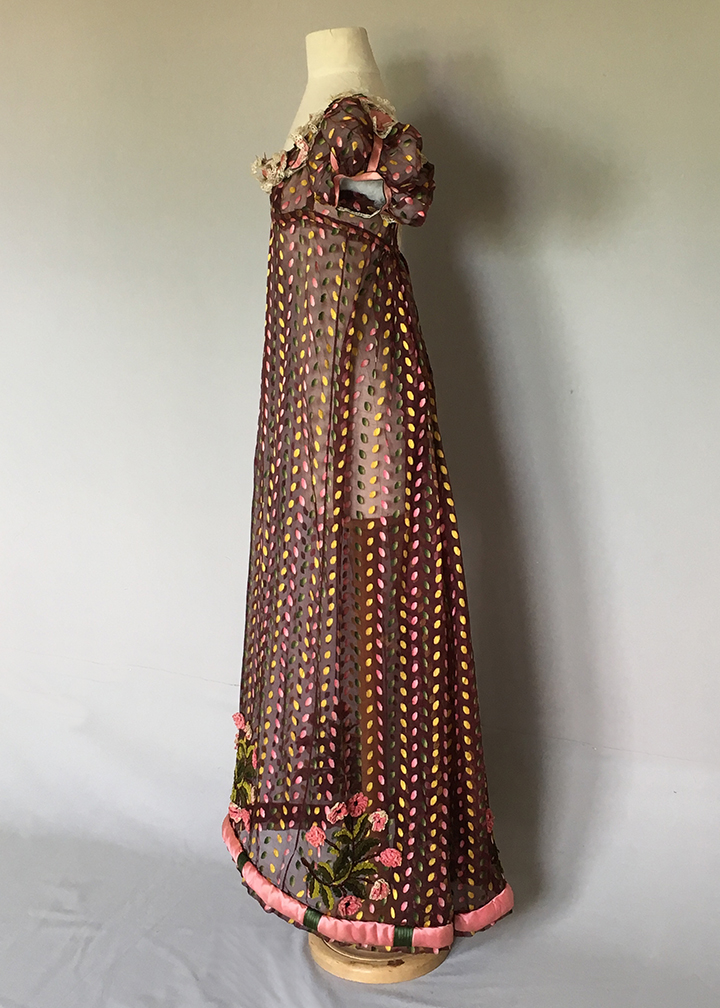 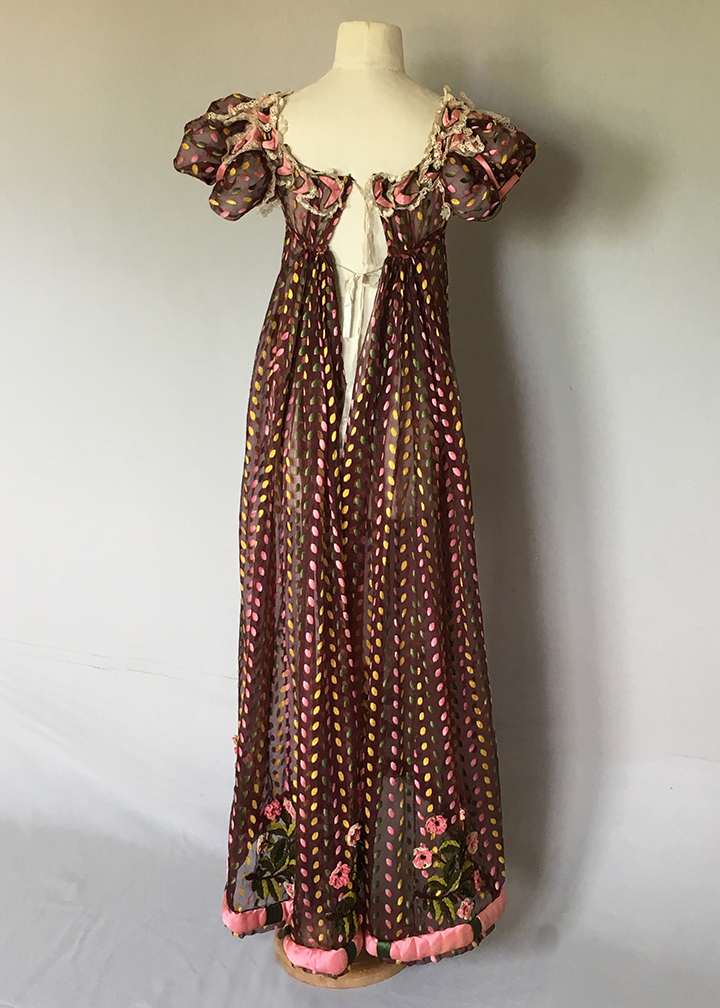 This dress belonged to Lady Elizabeth, known as Eliza, 2nd Marchioness of Breadalbane (1803-1861). Provenance by family descent.Lady Elizabeth Baillie of Mellerstain married John Campbell, 2nd Marquis of Breadalbane in 1821 when she was 18. They lived at Taymouth Castle, Perthshire and later Langton House, Berwickshire, Scotland.  This amazing dress might have been worn as a coming out dress or part of her trousseau.

Lady Elizabeth Baillie was daughter of George Baillie Hamilton, 10th Earl of Haddington, and Mary Pringle of Mellerstain House, Berwickshire. She was known as 'The Rose Bud Beauty' and married John Campbell, 2nd Marquis of Breadalbane in 1821. They had no children.

Eliza was Lady of the Bedchamber to Queen Victoria, Jan- July 1839. I can find no portraits of her which is suprising as the Breadalbane's were a leading Scottish family. Perhaps they have been kept in the family. Both she and her husband had slight stature judging from the size of this dress and his portrait.

I had some correspondence with the vendor, an ancestor of the family.  He wrote: His mother inherited some chattles from her father (the vendor's grandfather) who had lived at Langton for about six years after the First World War. The vendor inherited the clothes with note inside the box, which said they were worn at Queen Victoria's Ball. In the note it said that Lady Breadalbane (Elizabeth, known as Eliza Baillie of Mellerstain) had worn the rose bud dress.

This information that the dress had been worn at the  Bal Costume in 1851, is not correct  as it is much earlier.  That ball known as the Restoration Ball, commemorated Charles II being crowned king. The ball was held as part of the Great Exhibition celebrations. There is an 1853 engraving* of the Restoration Ball, which states: Her Majesty Queen Victoria's costume ball at Buckingham Palace, London,UK: Costumes worn by the Marchioness of Breadalbane, Lord Feversham, Lady Ashburton,......  The Morning Post (London), 16 June, 1851, p. 5 reporting on the ball stated that the Marquis of Breadalbane wore a magnificent Highland costume of green velvet, beautifully ornamented in gold.  Her Ladyship wore a dress of the fashion of King Louis XIV. Dress and train of blue Gothic moire .......

Eliza's husband John Campbell (1796-1862) was a Scottish nobleman and Liberal politician. Taymouth Castle was the prized residence of the Campbells of Glenorchy and Breadalbane, one of the most powerful families in Scottish history. Originally built in 1552 as Balloch Castle, but demolished in 1806 by the first Marquis of Breadalbane, John Campbell. It was rebuilt as Taymouth Castle, part castle and part country mansion. Queen Victoria and Prince Albert spent their honeymoon at the Castle in 1842. Victoria wrote in her diary of the lavish welcome the couple received.  Five years later the couple bought Balmoral.

This dress would have been very expensive when bought. The shaded ombre effect of the little ovals is very unusual. The silk warp threads on the loom would have been shaded to have produced this effect.  The silk gauze is only 17 in; 43 cm wide. One wonders if this was woven at a Scottish mill, Scotland having produced silk weaves during the 18th and 19th centuries. The puffed sleeves, with their four big puffs, show the influence of the Romantic style. As you will see from the measurements below, Lady Eliza was very slight when she wore this dress.The cut of the bodice with deep darts indicates a late 1818 period, but the padded hem early 1820s.  At some later stage, probably in the 20th century for fancy dress,  the dress was worn with the bow centre front under the bust, which caused the damage to the front.

During the 1820s there was a fascination with historical styles by medieval and Renaissance subjects.   Stylistic details from twelfth - through seventeenth-century dress were used in contemporary fashions. Puffs were inspired by the decoratively slashed sleeves of the sixteenth century.  There was a nostalgia for Britain’s past, evoking romantic notions of the chivalry or patriotism of earlier eras.

I also have another article of dress from the family. Eliza's husband, the Marques of Breadalbane's tartan fancy dress outfit, 1840s. See the Tartan Fancy Dress outfit on my website in Costume 1837-1901.

There is a pink bow with this which was described as hair decoration.

The dress is in remarkable condition. My guess is it was only worn a few times.  The bodice, centre front has a clean veritcal tear 3/4 inch to the centre - the width of the double fabric support for the high waist.  It has come away from the skirt by 2 in.  My wonderful sewer has supported the tear with a suitable dyed fabric.  The blonde lace all seems fine, but needs flattening out.  There is a little tear to the right hand shoulder, as you look at the dress, which we have stablised. The back skirt had come away, and my sewer has carefully gathered it back into the bodice. The chenille flowers near the hem have become a little bent, so need straightening. Photos available.

There is a silk net dress in the V & A European Galleries with a less exotic chenille flower hem.