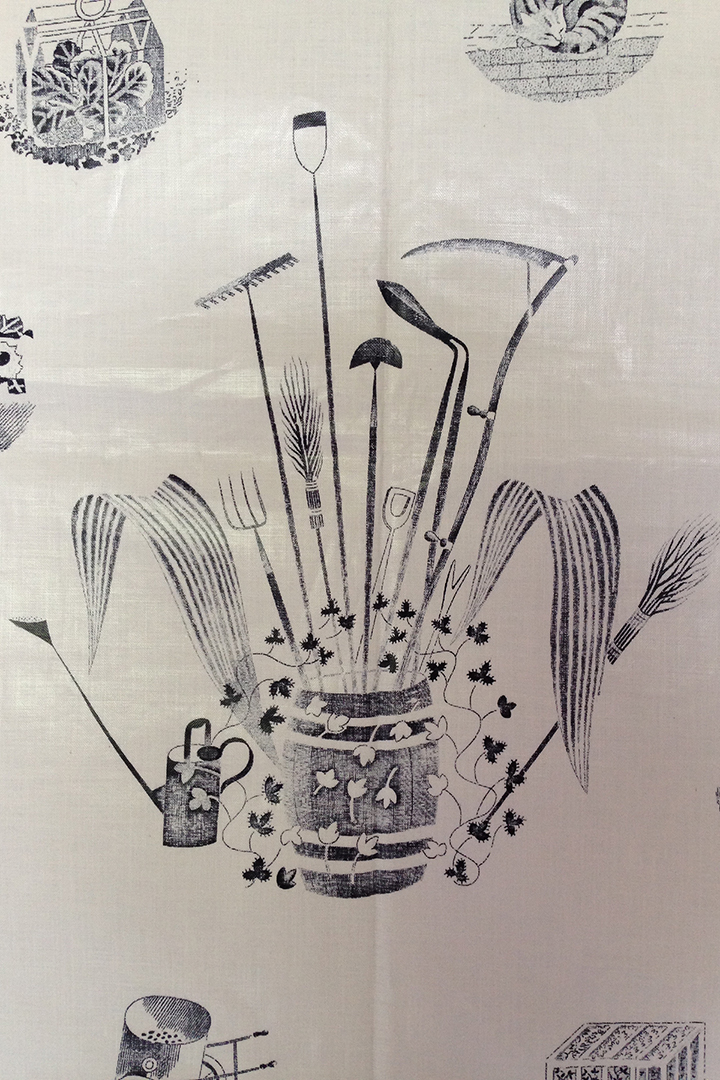 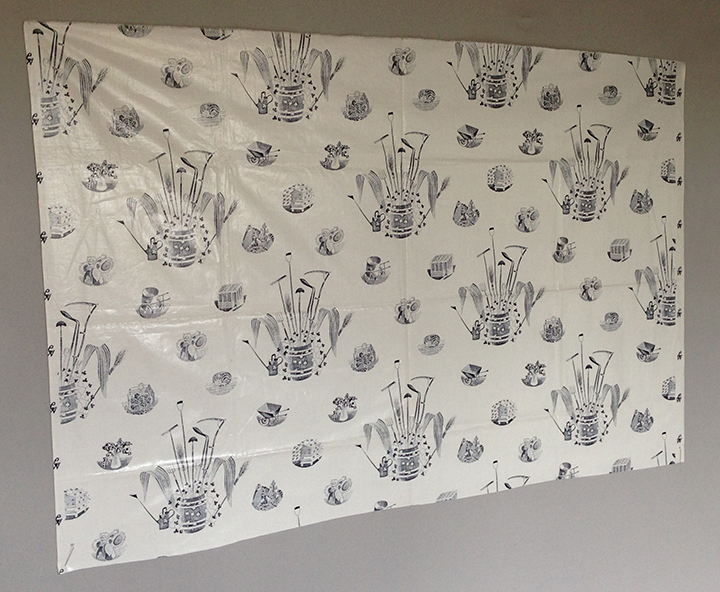 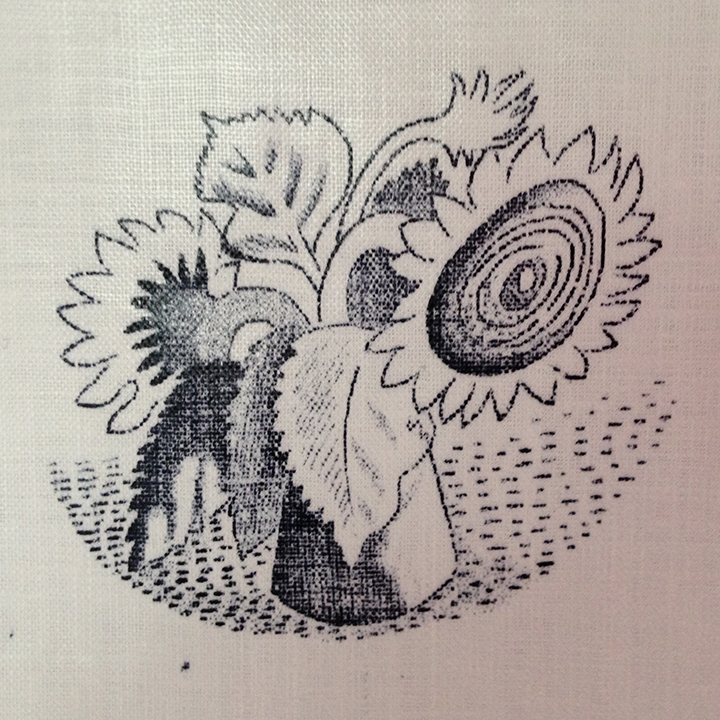 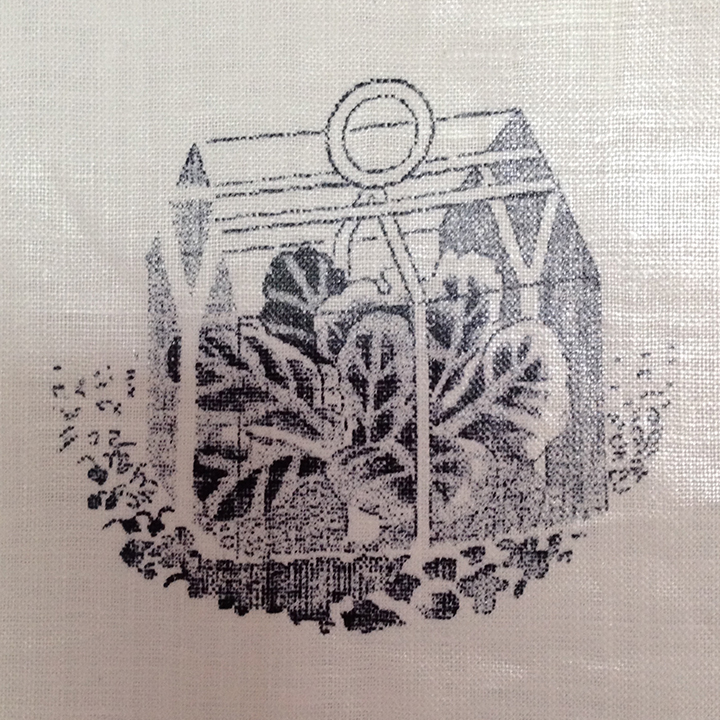 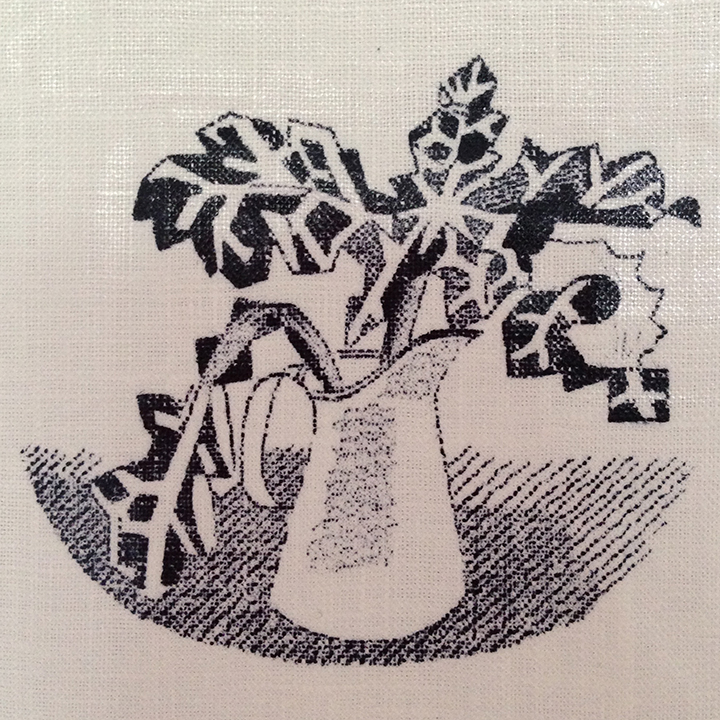 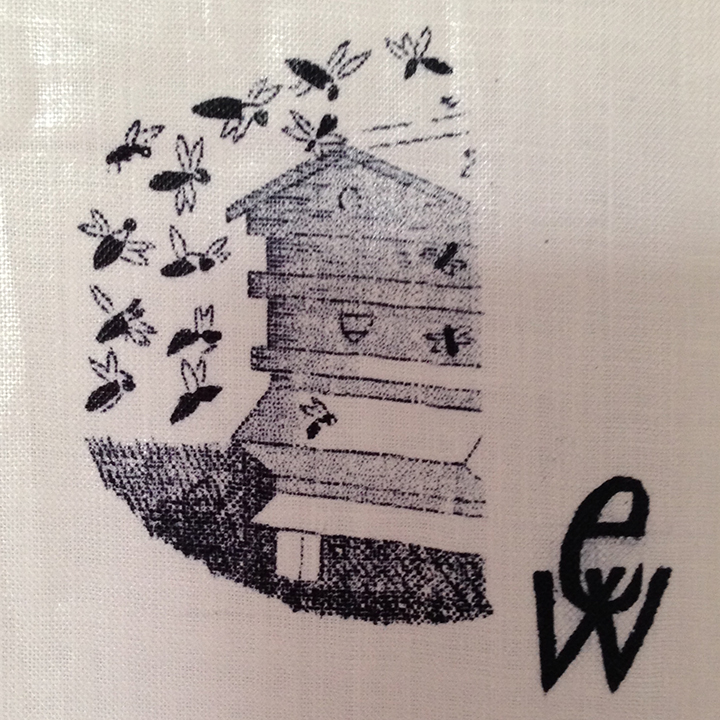 The vendor's father Alec Gardner-Medwin, Chief Display Designer for the Council of Industrial Design co-ordinated the 'Britain Can Make It' exhibition in 1946, an exhibition of industrial and product design held at the Victoria & Albert Museum London*

Gardner-Medwin went on to work with Gordon Russell, selecting things for the Festival of Britain 1951, and then continued at the Council of Industrial Design, later the Design Council, until the mid 60s.  Later Gardner-Medwin worked for Ernest Race furniture. His daughter, the vendor, told me her father bought whatever furniture and fabrics he could afford for his home, including this Ravillious piece. The unused length was left over from curtains. It still has the original glaze on it.

Eric Ravilious (1903-1942) watercolourist, muralist, printmaker, book illustrator in wood engraving and lithography, designer. Ravillious grew up in Eastbourne and attended Eastbourne School of Art, won a £60 scholarship to attend The Royal College of Art where he studied under Paul Nash. Known as 'The Boy' partly because he disliked his christian name and partly because of his youthfullness. He became good friends with Edward Bawden. Ravilious designed and painted murals for Morley College, London and the Midland Railway Hotel, Morecombe. He designed ceramic designs for Wedgwood, furniture for Dunbar Hay and glass for Stuart Crystal. From 1939 to his death he was an Offical War Artist and died on a reconnaisance mission plane over Iceland . He became one of the best known artists of the 1930's. Ravilious designed this print for a lemonade set, produced by Wedgwood in 1939. Wedgwood Pattern book entry CL6323. The design was printed onto the Wedgwood Liverpool Jug, adorned with a radial grouping of garden tools in a wooden barrel, similar to painted or printed decorations on historic pieces. The back of the jug groups eight vignettes whose clear delineation, suggestive of emblems rather than just decoration. The design was later used by Edinburgh Weavers as a printed textile.The design was probably wood engraved and appears to give the effect of being drawn with a pencil.

In Alan Powers book he says that from 1933 a series of exhibitions engaged the public in new product designs, culminting in the British Pavillion at the Paris International Exhibition in 1937, where Ravilious designed furniture, plates and tennis clothes. In 1942 the British Council organised a touring exhibition for the USA which included samples of textiles that Ravilious worked on for the Cotton Board. Some were dress fabric patterns.  Some furnishing fabrics with pictorial repeat patterns, including one showing buildings at Castle Hedingham, only reached sketch stage. A design for a child's handkerchief was also produced.

Edinburgh Weavers was founded by James Morton in 1928, an experimental subsidiary of Morton Sundour Fabrics Ltd, his family's textile business established in the 1860's. Alastair Morton became its artistic director. A British abstract artist he envisaged Edinburgh Weavers would provide furnishings to complement modern developments in architecture. Leading artists of the day were commissioned to create patterns and the firm built up a reputation for cutting edge design. Many designers and painters continued to design textiles for the firm until the 1960's. Morton's understanding of the most pregressive art trends greatly influenced his work in textiles.

It was organised by the government to give the British a feeling of recovery in the aftermath of war and to promote the British contribution to science, technology, industrial design, architecture and the arts.*

Garden Implements printed by Edinburgh Weavers, the selvedge with a repeated monogram EW , the white glazed cotton printed in black with barrels filled with gardening tools, leaves and foliage, surrounded by an oval of small motifs including a watering can, a wheel barrow, bees buzzing round a hive, a vase with leaves, a small glass consevatory with lettuces, a compost bin, sunflowers, a greenhouse a clump of foliage and a sleeping curled tabby cat.

Unused. Excellent. It has the glazed finish.

The Fashion Institute of Technology, New York and The Whitworth Museum in Manchester, UK also have pieces of this fabric. The Whitworth have a green printed example.