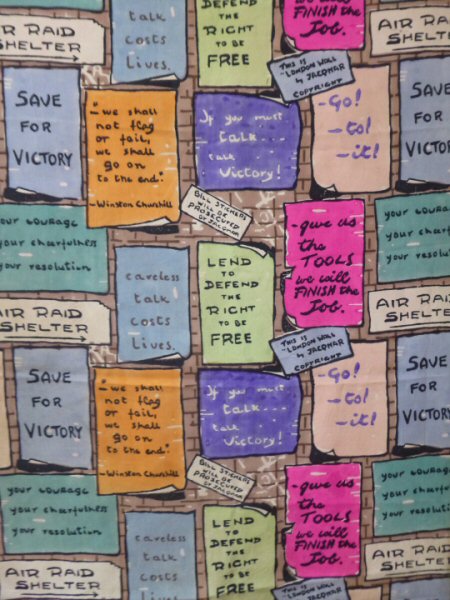 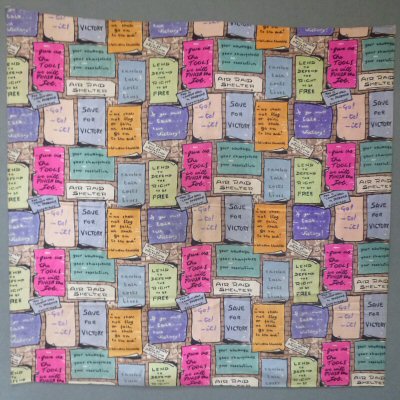 Propaganda scarf and one of Jacqmar's most famous. Designed by Bianca Mosca. Despite there being fabric restrictions during the war this one is made of silk crepe. Scarves were usually made from rayon. It depicts posters with slogans relating to wartime Britian, pasted on a wall.  This design was also available by the yard, and was featured in British Vogue, April 1942, with Vivien Leigh modeling clothing in propaganda prints. I wonder if this narrow length is actually yardage. This would look good framed.

This scarf was included in an exhibition at the Design Museum in London Women Fashion Power 29th October-26 April 2015.

A similar headscarf and blouse are on display in the new Costume galleries at the National Scottish Museum, Edinburgh.

London Wall designed by Bianca Mosca, screen printed on silk crepe by Liberty's. with posters pasted on a wall with slogans relating to wartime Britain:  This is London Wall by Jacqmar. Copyright and Air Raid Shelter, Your courage, your cheerfulness, your resolution Save for victory We shall not flag or fail, we shall go on to the end - Winston Churchill, -Go! -to! -it! Give us the tools. We will finish the jobetc all in black on terracotta, blue, green, salmon and deep pink ground, the brown wall outlined with black, 35 in;  90 cm sq.

Very good. One minute hole to one corner.

Jacqmar was founded by Joseph (Jack) and Mary Lyons in 1932 with offices in Mayfair. The company designer was Arnold Lever who designed propaganda headscarves. This design was printed at Merton Abbey works.  In Paul Rennie's article London Squares British Propaganda Textiles of WW2, April 2004 for Bard Graduate Center, NYC he states: Jacqmar produced a variety of propaganda textiles aimed at the export and home markets. They advertised their products as British designed and British made.The Cotton Board organised export trade exhibitions in 1941 and 44, particularly aimed at the American market but also at South Africa and South America. The designs fall into three main thematic groups: service, friends and victory. The propaganda prints are unusually unsigned. The Jacqmar style perfected by Lever and the studio was for a dynamic and expressive line drawing. The inexact registration of colour blocks over the line give a pleasing looseness to the design and hint at cubist influences. Lever established his own design studio in 1947. Lever also block printed a scarf for Liberty's after WW2. In his article Rennie emphasises that the propaganda textiles of WW2, within their British context, survive almost exclusively as silk and rayon squares although more substantial garments do exist. These were used as headscarves and neckerchiefs. ...The style was endorsed by advertisements in the fashion press and modelled by celebrities He goes onto say that these textiles are particularly interesting because of the absence of political intervention in their creation, unlike in Europe. Scarves could transform an outfit. Not only did the well off buy headscarves and this particular example would have been more expensive, but for women working on machinery it was essential to cover their hair to protect it and the scarf became an essential part of their uniform. It is not suprising that the scarf should emerge as an object with symbolic, patriotic and propagandistic meanings during a time of war, but also considered glamorous and desirable. See Post War British Textiles p 1 ( Bibliography)

An exhibition earlier in 2012 at the MFA, Boston displayed similar scarves.