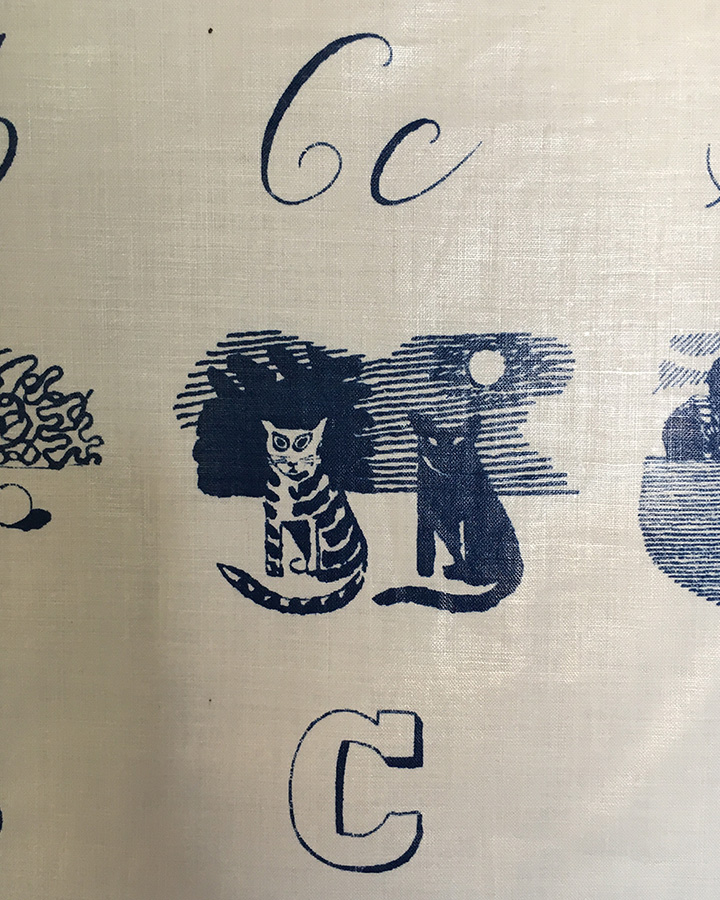 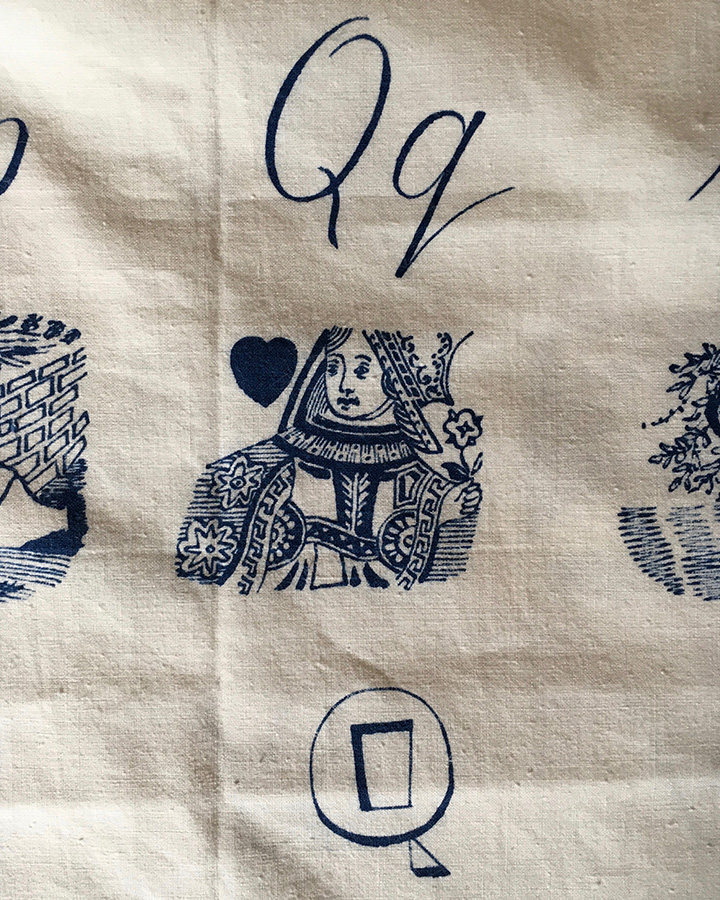 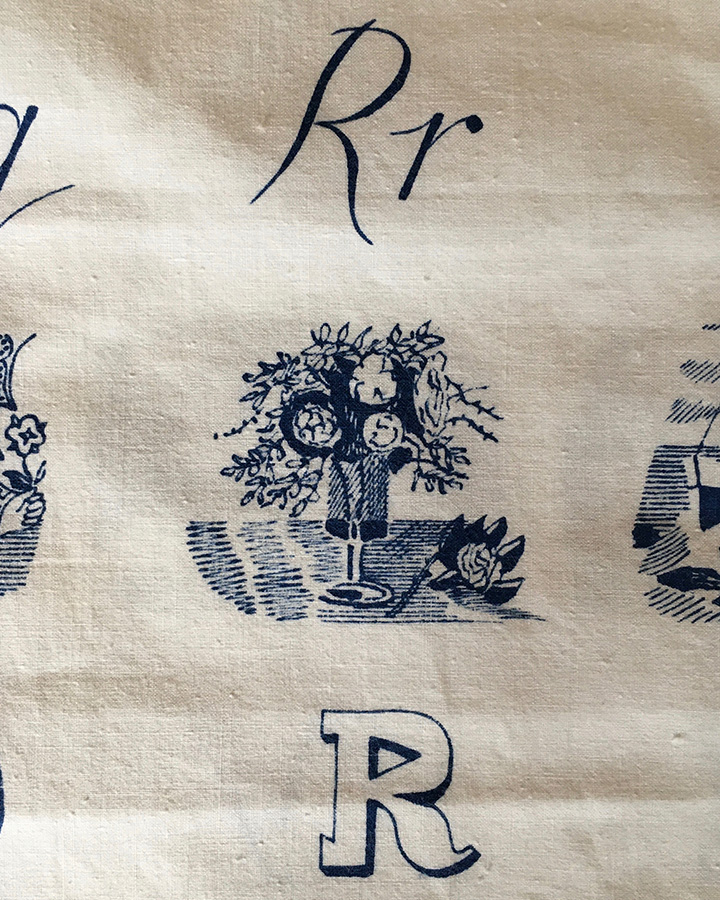 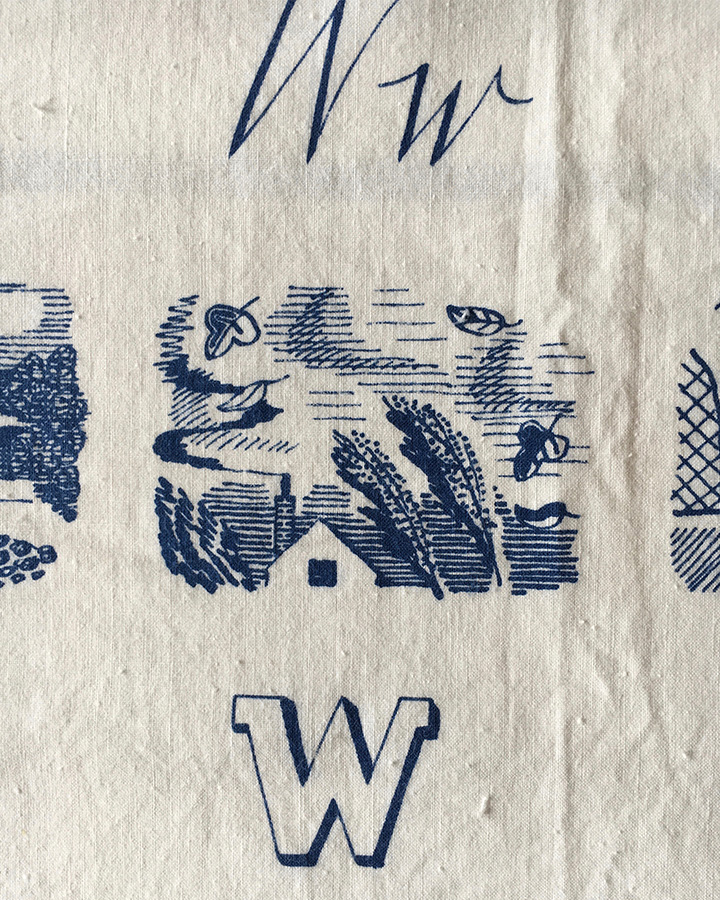 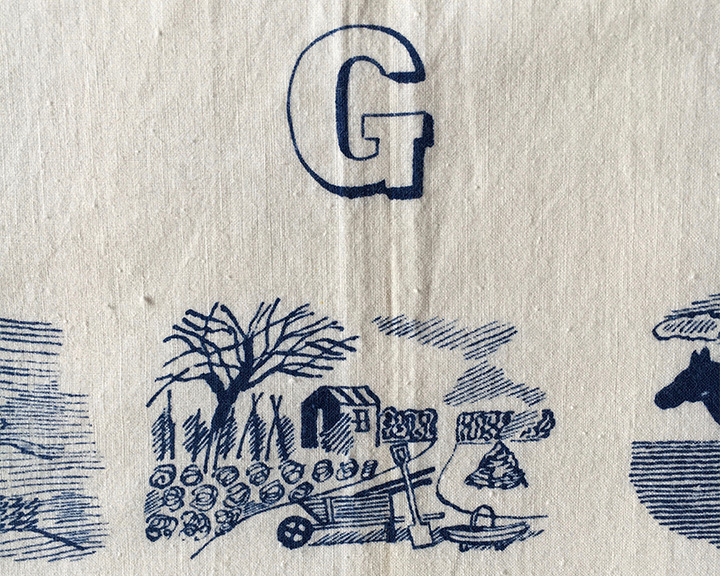 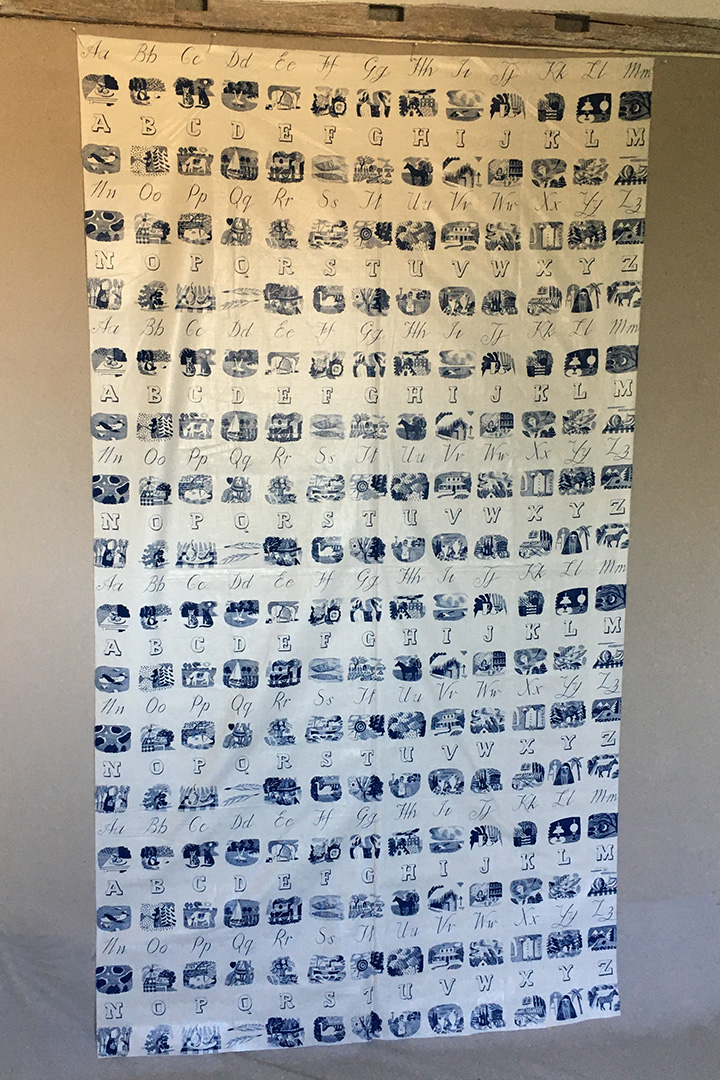 This rare design was screen printed and produced in black,red and blue by Edinburgh Weavers of Carlisle, Cumbria.  Clearly the influence for this design was Eric Ravillious' design for his pre-war Alphabet ceramics for Wedgwood. Both men were fascinated by letter-forms.

Kenneth Rowntree was part of the Rowntree confectionery family. He trained at the Ruskin School of Drawing in Oxford, tutoured by Eric Ravillious, continuing his education at the Slade in London. In 1939 he married the architect Diana Buckley. They associated with many of the modernist emigré architects living in London at that time. Being a Quaker, he did not fight during WW2, instead became a part of the Recording Britain project, in which everyday life in wartime Britain was captured by a range of artists. When Diana became pregnant in 1941 they moved from London to a house found for them by Eric and Tirzah Ravilious, in Great Bardfield, close to the Ravillious and Bawden shared home. Rountree joined the Great Bardfield artists' community. Local churches provided a strong inspiration for much of Rountree's work,  but he also worked in London, Kent and Wales. He taught mural studies at the Royal College of Art from 1949, and his extensive output included paintings, murals, book design for Penguin, posters for London Transport, magazines and advertising. For the Festival of Britain in 1951 and for the Queen's corontation in 1952 he painted murals.  In 1959 he became Professor of Fine Art at Durham University, Newcastle, then a particularly fertile centre for contemporary British art. He retired to Northumberland.

Edinburgh Weavers, the trail-blazing experimental subsidiary of Morton Sundour Fabrics, was established in 1928 by James Morton.  Alec Hunter, formerly of St Edmunsbury Weavers*, was in charge of the new enterprise, exploring links between textiles and architecture, producing a range of modern woven textiles. In 1930 there was a slump and he was made redundant. The company moved from Edinburgh to Carlisle, under the directorship of James' son, Alastair. Modern designs were commissioned from young painters, sculptors and designers for screen prints and woven textiles. Alastair, an artist himself, produced the designs with great attention to detail creating a true interpretation.    Nicholas Pevsner described the company as a laboratory for the best modern textile art.** It was taken over by Courtaulds in 1963.

This length with four repeats was bought with an identical length which had the EW to the selvedge* I would consider cutting one repeat from this piece should you be interested.

Four repeats of rows of small vignettes, some humourous, domestic, outside scenes and animals, with double lettering A to Z either in italics or bold, all screen printed in dark blue on white cotton.

A length in black is in the collection of the Fry Art Gallery, Saffron Walden. No. 1847

* See my article on St Edmunsdbury Weavers in ARTICLES.