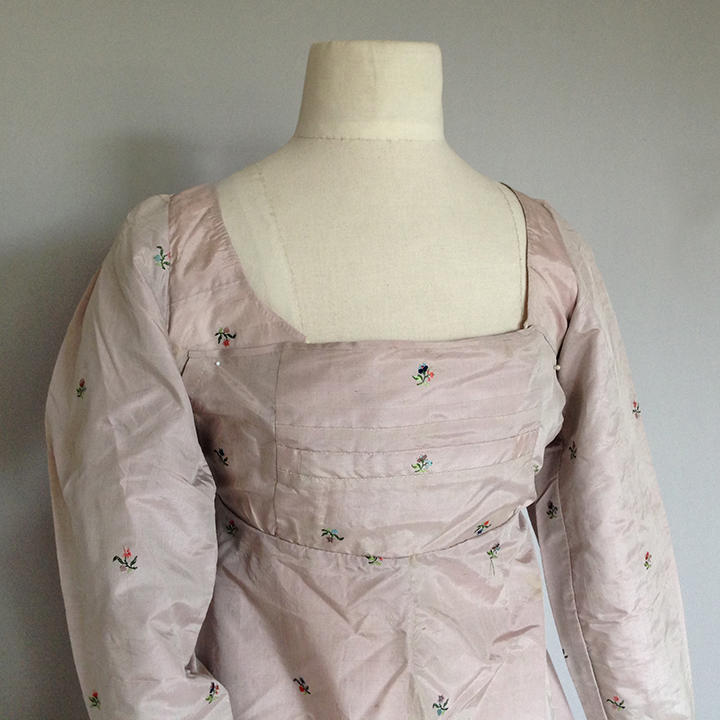 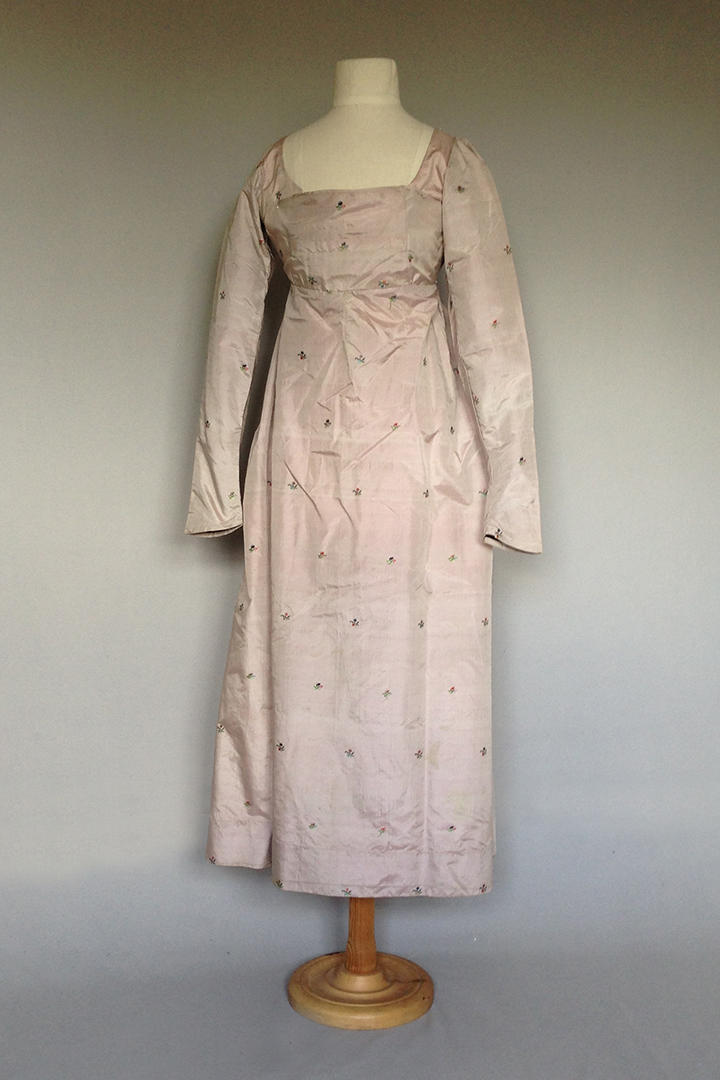 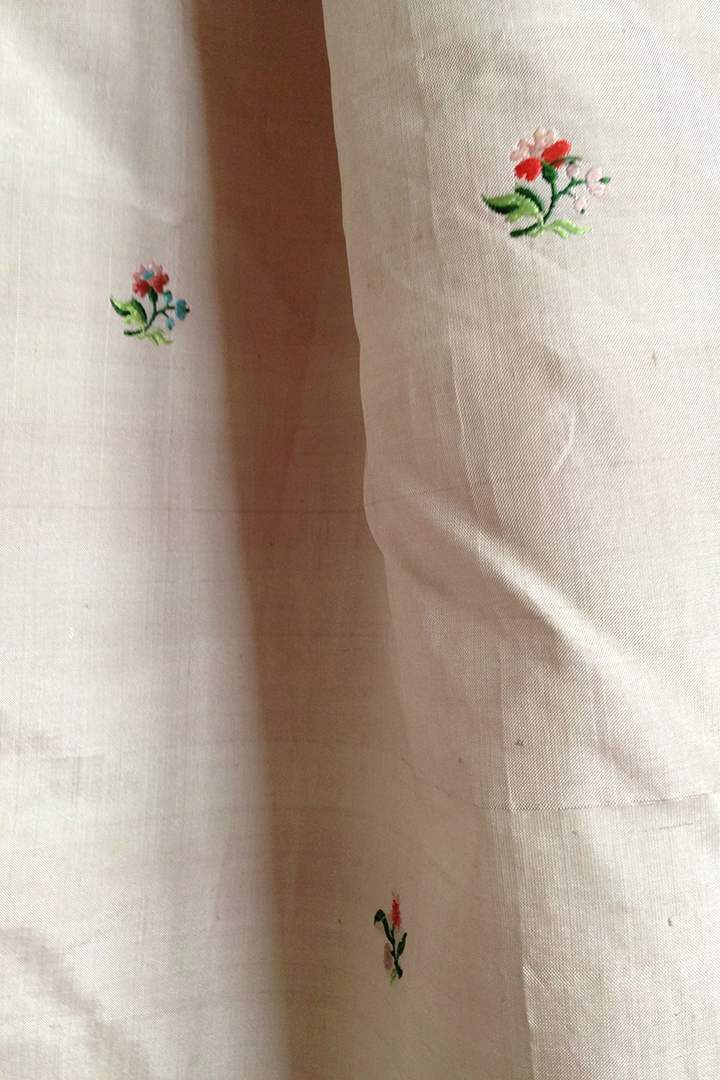 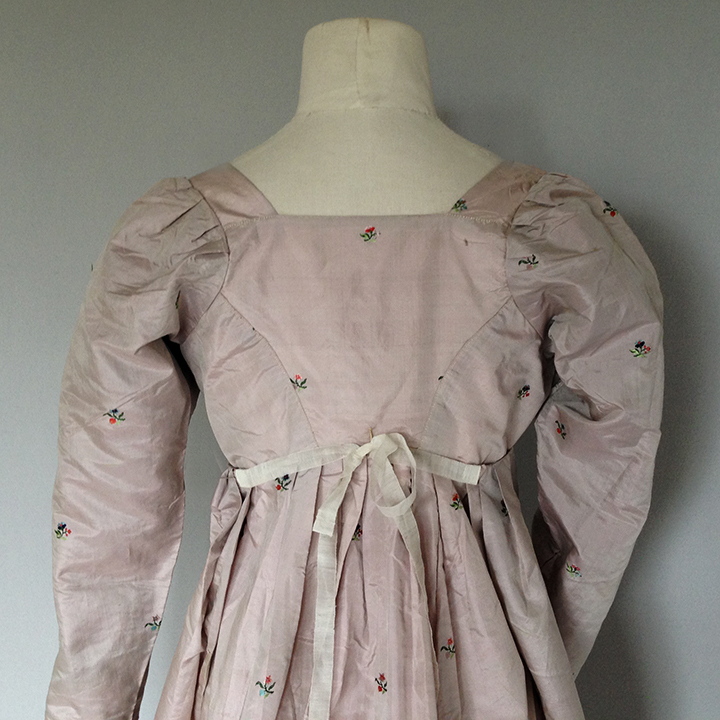 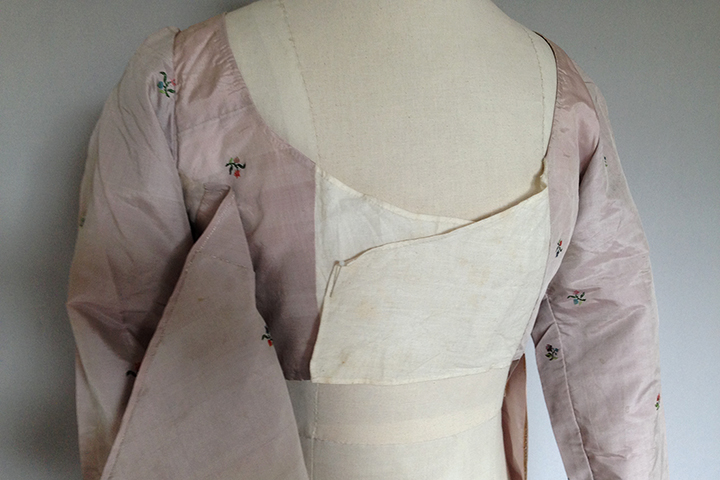 Although the dress has been altered, and there are stains, I bought it because I felt the embroidered silk was most unuusal.  I would say it probably French. I think it might have been altered from a late 18th century gown.

This dress has come by direct descent from the family of Samuel Bagster the elder (1772-1851) and, more particularly, his wife Eunice Bagster (1777-1877). Samuel Bagster was a publisher and author whose name became synonymous with Bagster bibles. He published numerous different editions of polyglot bibles with new notes and references. He presented bibles to King George IV, King William IV and Queen Victoria, who honoured him for his compilation of Bagster’s Comprehensive Bible. He died at his home at Old Windsor, Berkshire, on 28 March 1851, his wife Eunice (nee Birch) surviving him by some twenty-six years, dying on the eve of her 100th birthday. Queen Victoria certainly knew Eunice Bagster and the Royal Collection has a photograph of her, taken on her 99th birthday (23 August 1876) which was acquired by Queen Victoria. Family legend has it that Queen Victoria also visited Eunice Bagster the day before Eunice’s 100th birthday with some flowers, knelt by Eunice’s bedside and was blessed by her. Sadly, Eunice died that night, but family legend relates that the flowers left by Queen Victoria were used at the ensuing funeral.

The lavender silk taffeta sparsely scattered with finely embroidered minute flower sprigs in red, pink and two shades of blue and green, the silk woven with a shot effect of lavender and pink with an almost check effect.

The high waisted bodice with deep round neck, white cotton panels for fastening across the bust, the fall front with a panel with three horizontal pin tucks, ivory silk ribbons for tieing, the back with deeply inset sleeves and curved seaming down to the high waist, a beautiful embroidered loop centre back (for a sash), wide pleats to the skirt back, full skirt, the long shaped sleeves simply cut, the bodice is lined with a calico and the arms with a brown silk.

The fall front bodice and the hem have been altered at some stage.