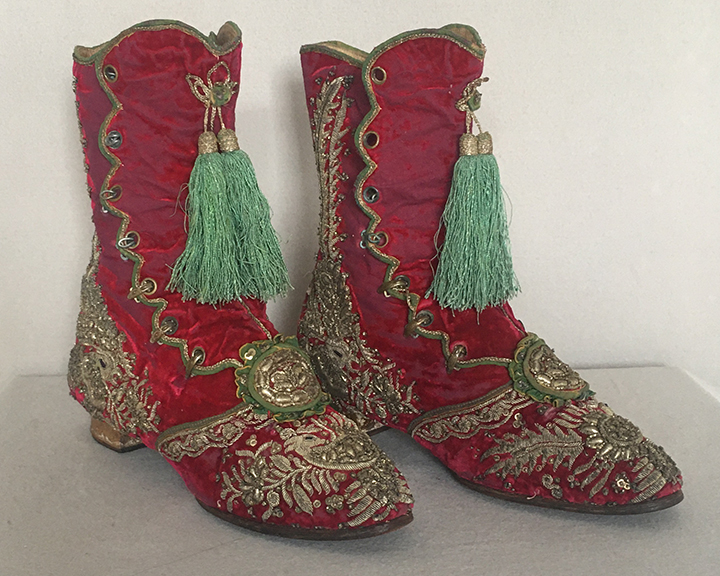 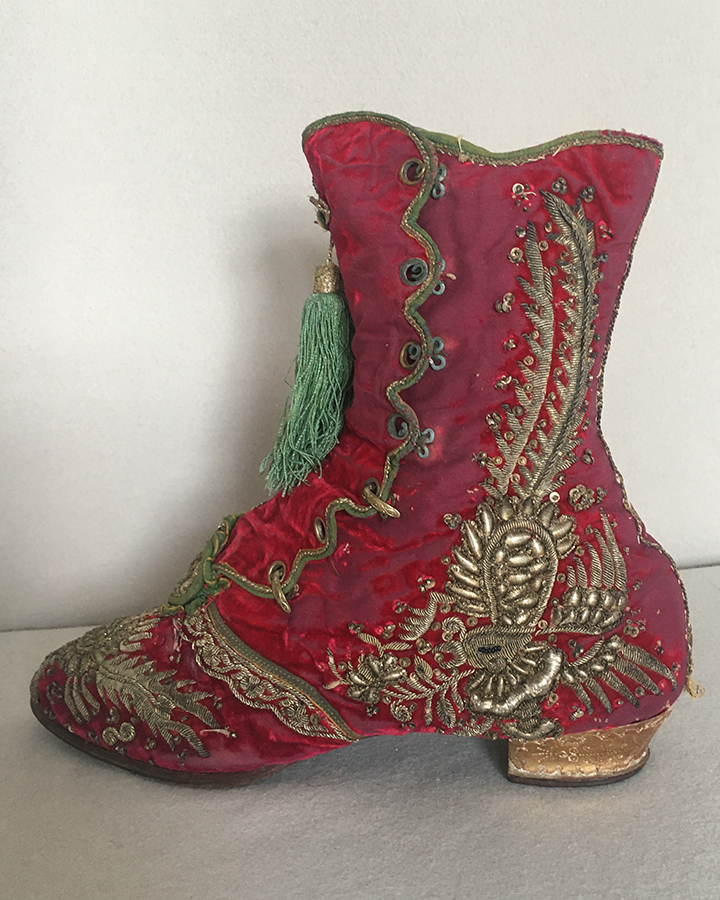 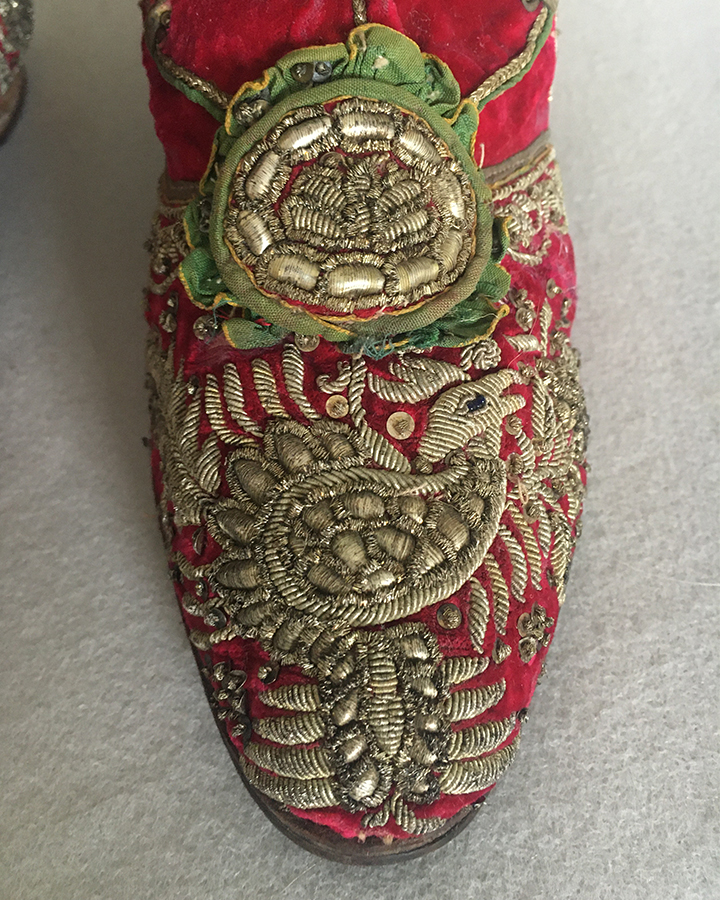 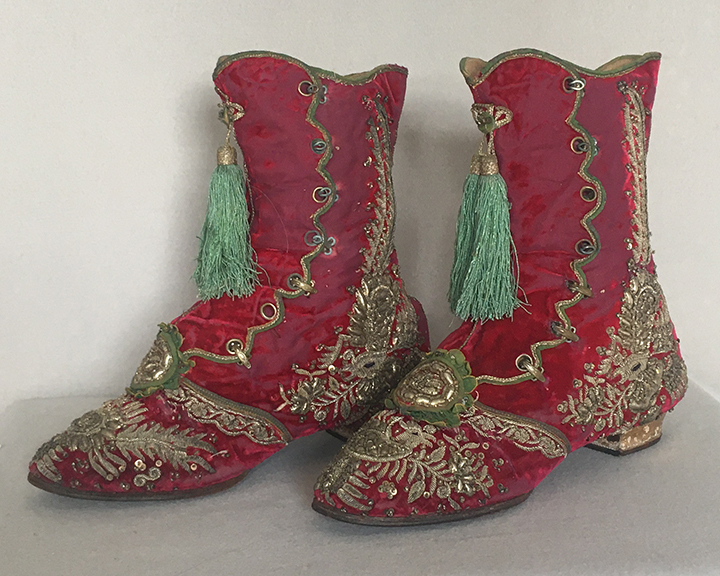 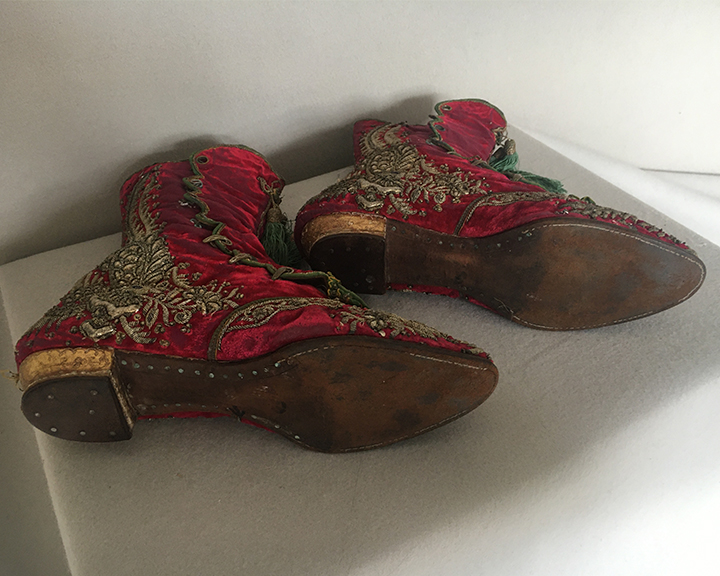 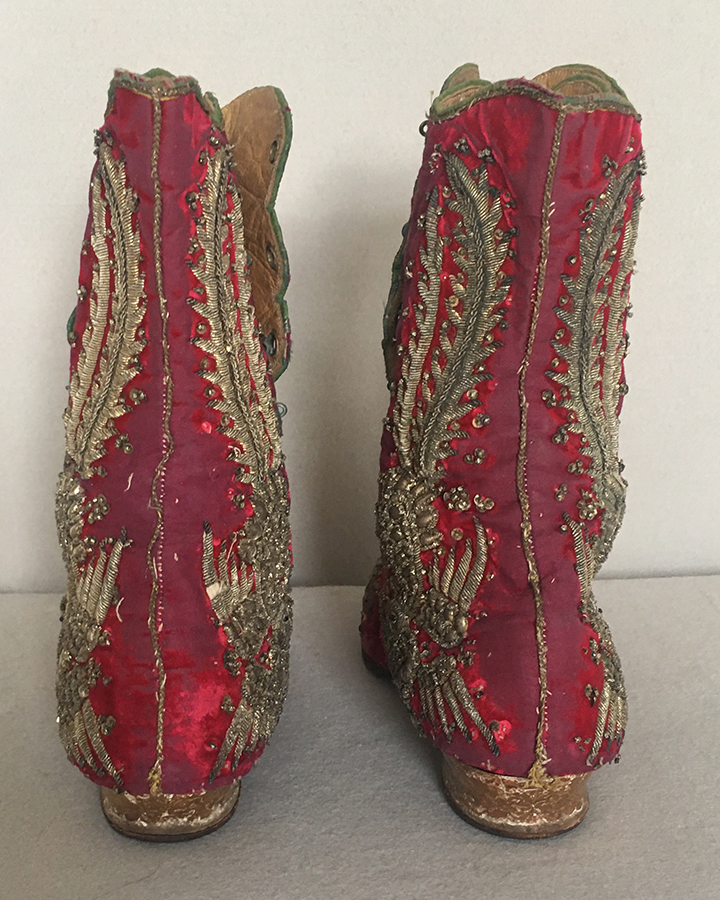 These have the WOW factor and are rare.  Similar boots are usually found in the Indonesian island of Java, where they were made for Peranakan Chinese brides. The Dutch were in Java and the influence of the shape of the boot is very much a Western one. You find women's ankle boots with low heels of the 1890s in Europe and America.

The Peranakan Southeast Asian communities, who established themselves in the colonial settlements of the 16th and 17th centuries, were originally from China. They settled in the trading ports of Penang, Malacca, Singapore and Java.  Chinese women were restricted from leaving the mainland until the 19th century, so the Chinese male immigrants married native women or took them as concubines. The Peranakan evolved a fusion of cultures which came to be known as Straits Chinese.  The menfolk were referred to as Babas and the women as Nyonyas. Those two phrases were terms of respect and are still used today.

The colourful wedding ceremony of the Peranakan people was largely based on Chinese tradition and in Malay and Singapore continued for twelve days. In China the pheonix represented the Empress and the decoration was used by women on thier wedding clothes -  they became an empress for the day. Red was the Chinese happiness colour and worn for Chinese weddings.  The raised work silver strips, tinsel and sequins is surely Zardosi work from Northern India, worked by Muslm men, and originally from Persia. Only the lower clasp fastenings securing the boots are decorated.  Perhaps this was because the bride's skirt would have concealed the upper fastenings?

Boots are seldom in good condition due to the imported, possibly French, silk velvet which was used, normally used for hats, and therefore not suitable for the heavy use that boots would have had.

Cherry red silk velvet, shaped tops, the opening a fall front secured at each side with brass ringed holes and large incised hooks, the edges with green cotton and gold thread, two sea green tassels hanging from the top front of the boot, the toes densely embroidered with a pheonix, flowers and leaves, all in gold wires, one coiled, one flat between tinsel and brass sequins, below a similar worked flower rosette, edged with green and yellow cotton ribbon, the back sides with an even more exotic pheonix with feathers reaching to the top of the boots, gold incised heel,leather lined,  leather soles

The left hand boot is in similar condition with the velvet well rubbed. A split 1 1/4 in; 3.5 cm long tothe right hand side just below the rosette. Again the first four hooks to left and right hand sides are simple hooks, with the lower three incised covered hooks.  I assume the original hooks were broken and these plain hooks were sewn on at a later stage.

Both boots have rubbed goldwork heels.

Similar boots but with an open front and horizontal straps can be found in the Peranakan Museum, Singapore.