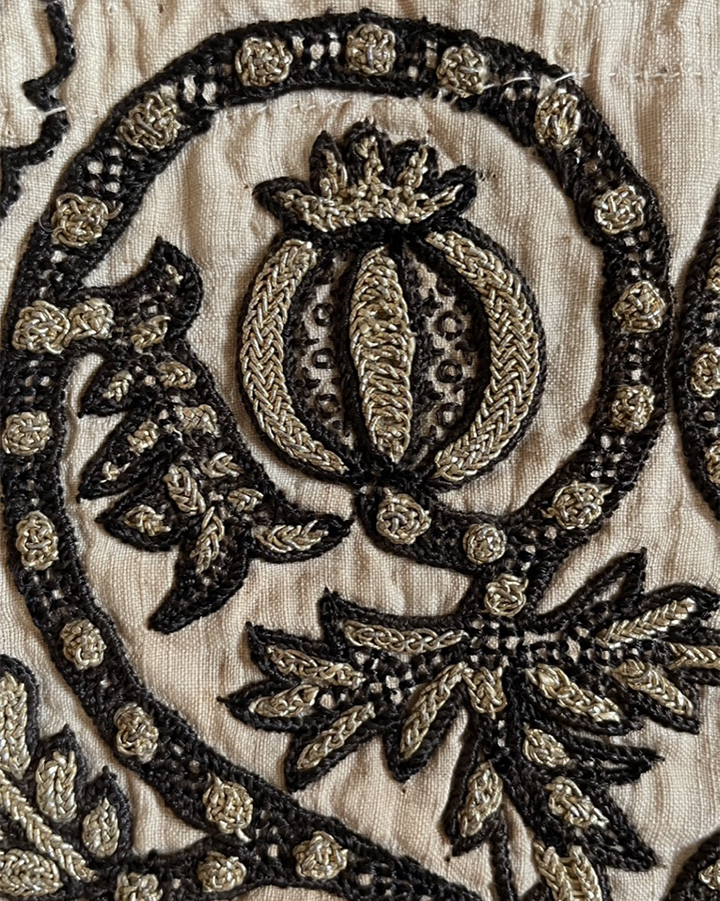 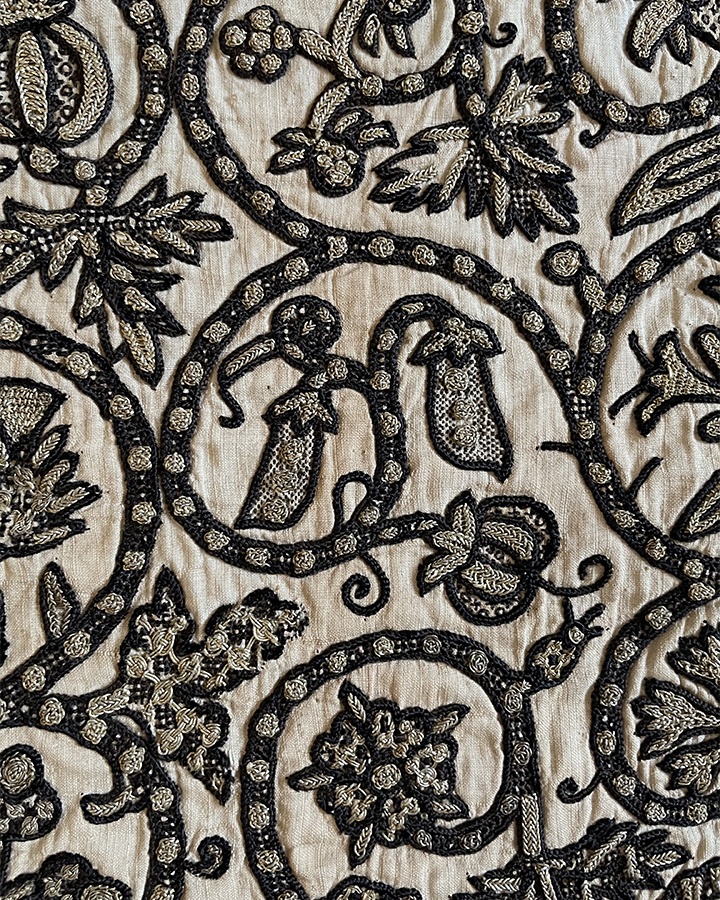 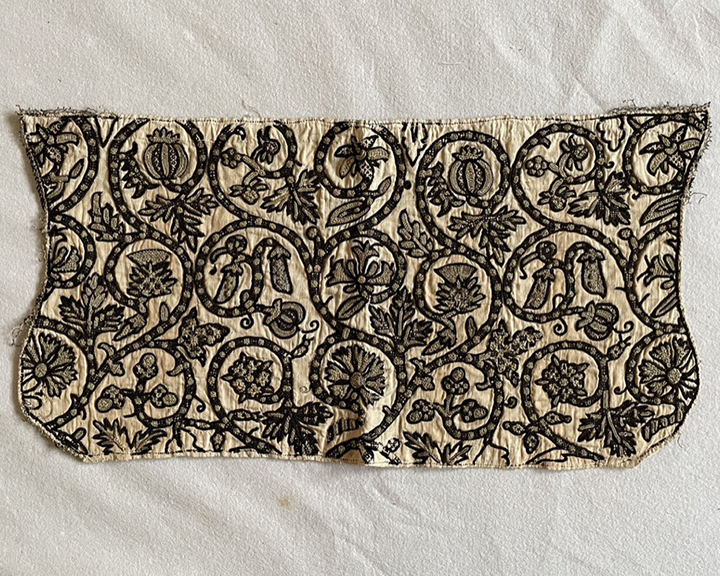 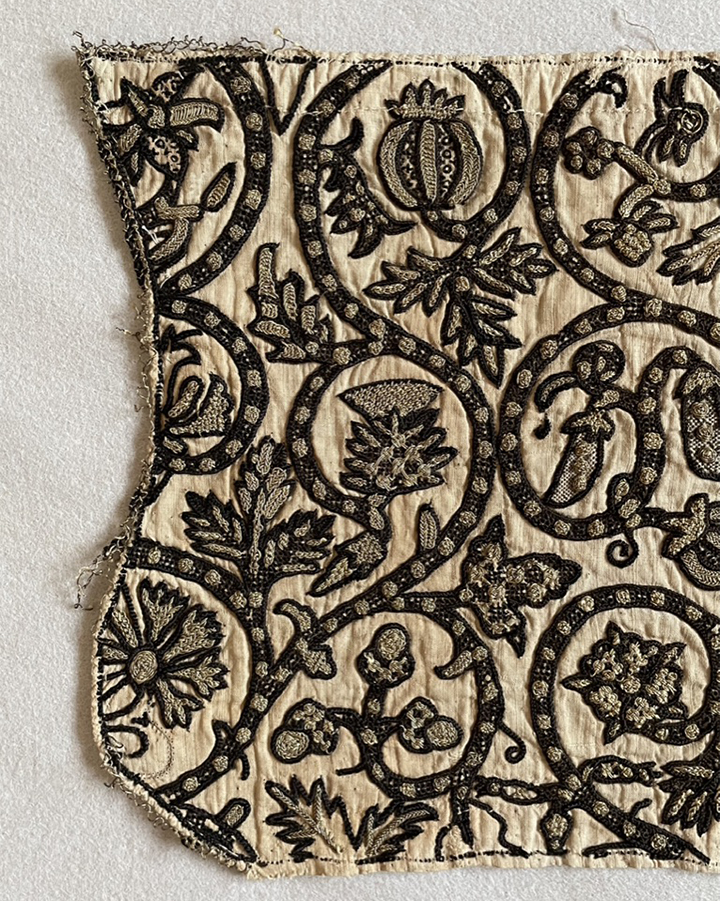 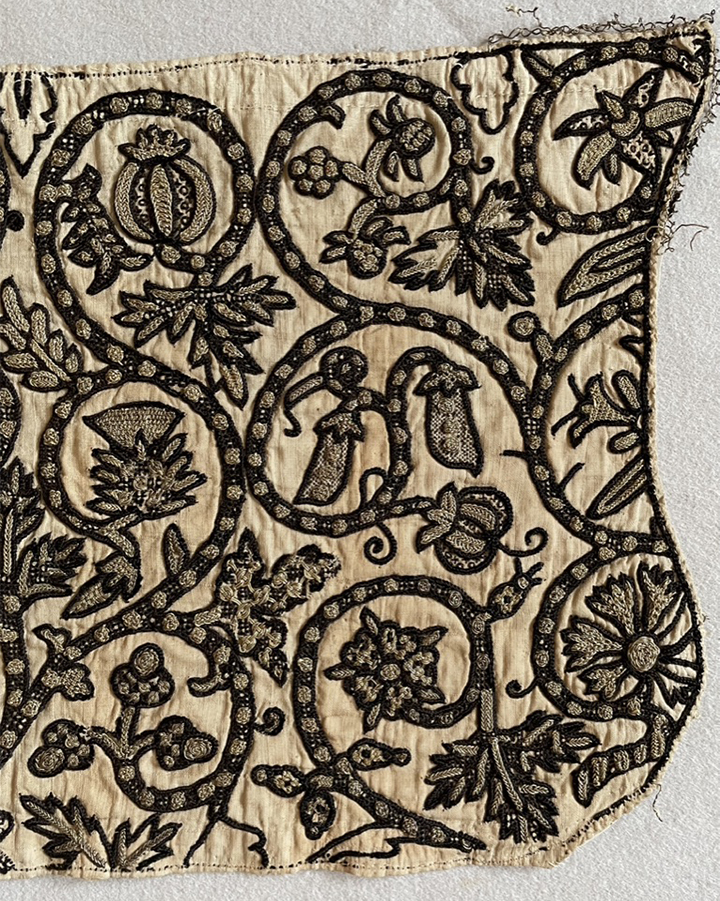 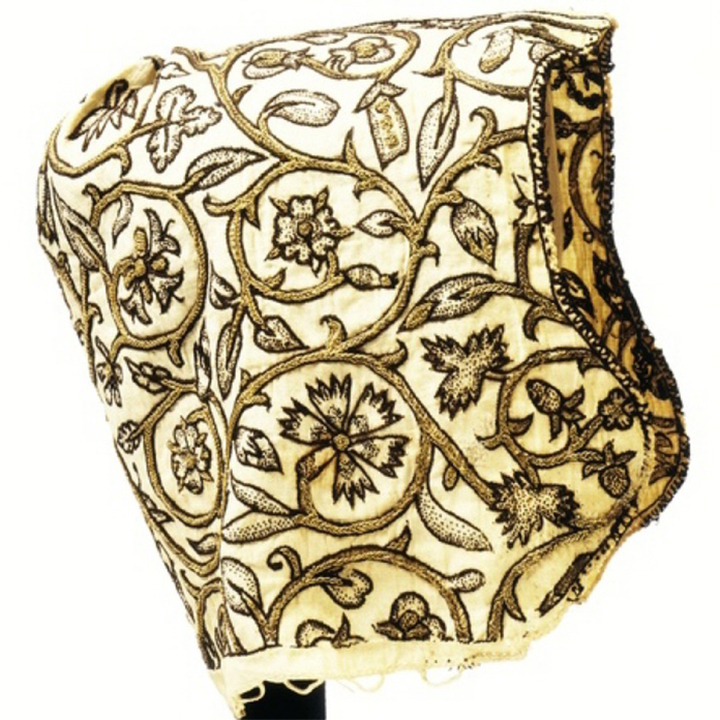 The goldwork and the densely embroidered black silk on the coif give a three dimensional effect. The gold work is achieved by beating thin layers of gold and twisting it around a silk core. The coif came from a house built in 1550. The coif was on long term loan to a museum. Provenance will be made available to the buyer.

In Rebecca Quinton's excellent book* she tells us that during the Elizabethan (1558-1603) and Jacobean period (1603-1625) when James I was on the throne of England, linen coifs became fashionable for aristocratic, gentry and middle-class women, who would wear them informally to keep warm in draughty houses, which is why they are rarely seen in portraits.  It formed a close fitting cap, which covered the top, back and sides of the head, with a drawstring tying at the back of the neck. The drawstring would have been threaded through the long straight side.  It might also be worn with a small triangular forehead cloth. Many were embroidered by women at home, but the majority were worked by professional male embroiders.

There was a huge interest in horticulture at this period and with greater wealth came more leisure time when gardens and nature could be enjoyed. Accurate representation of flowers and fruits are depicted on costumes with inspiration coming from individual paper sheets printed with designs which could be copied, or from books such as herbals. Often designs were transferred to the linen by a prick and pounce technique. The design on the paper was pricked with small holes through which charcoal or pounce (cuttlefish bones) was scattered, the dots then being joined up with ink. The earliest pattern book was printed in 1524 in Augsburg in Germany, aimed at the amateur embroideress as well as professionals. John Gerard, in the introduction to his Herball of 1597, likened a garden to embroidery rather than the other way round: For if delight may provoke men's labour, what greater delight is there than to behold the earth apparelled with plants, as with a robe of embroidered worke...

The coif with a variety of flowers attached to scrolling tendrils or rinceau (foliage), including honeysuckle, thistles, pomegranates, tudor roses, acorns, pinks (carnations), strawberries, eglatines, a wild rose, borage and peapods or peascods (fertility), the pea pods with entwined knots, embroidered in three dimensional gold plaited braid stitch, the pod with small black silk stitches, outlined in embroidered black silk, most of the flowers and the tendrils densely embroidered in black silks in a plaited stitch, all on a light taupe linen ground, edged with gold wire bobbin lace.  Backed with silk gauze.

In remarkable condition. Very very good. I can see two small tendrils where the black silk has come away. Near the bottom centre there is a little wear to a stem. Ask for photos. There is some missing goldwork wire, wrapped round a silk core, from the top and sides. No stains, tears. The edging bobbin lace is mainly missing.  The coif was on long term loan to a British museum who backed it with a fine muslin which I have left, but could easily be removed.