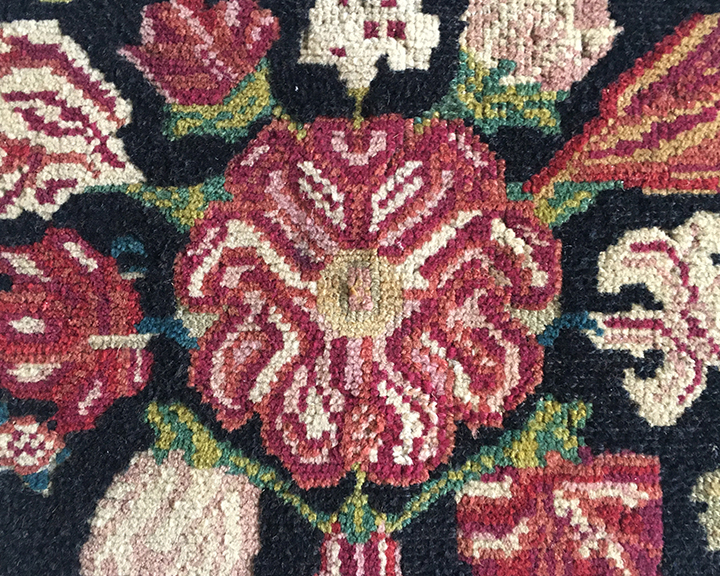 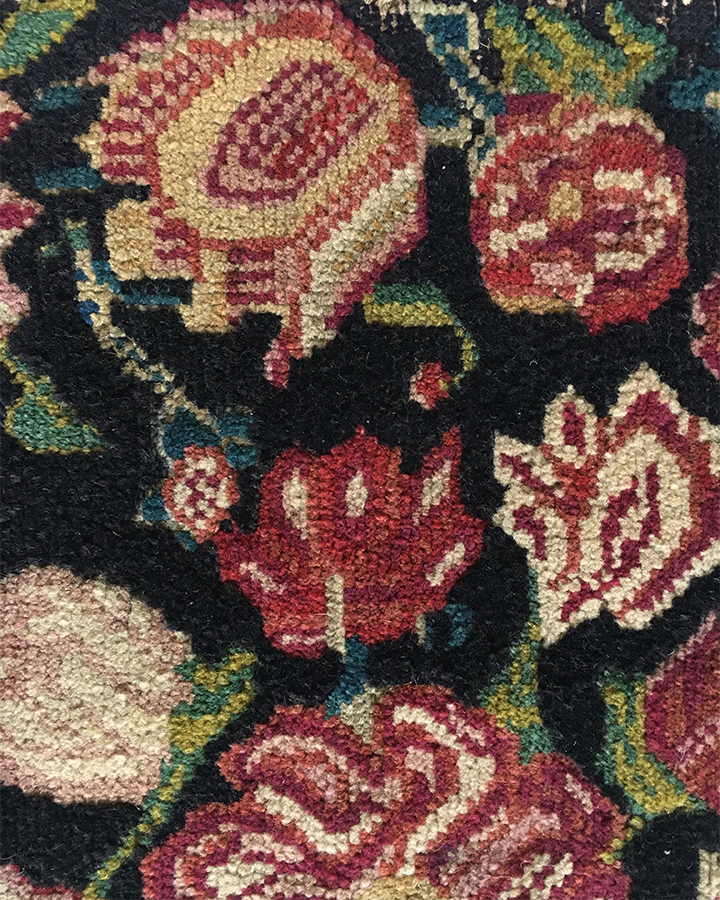 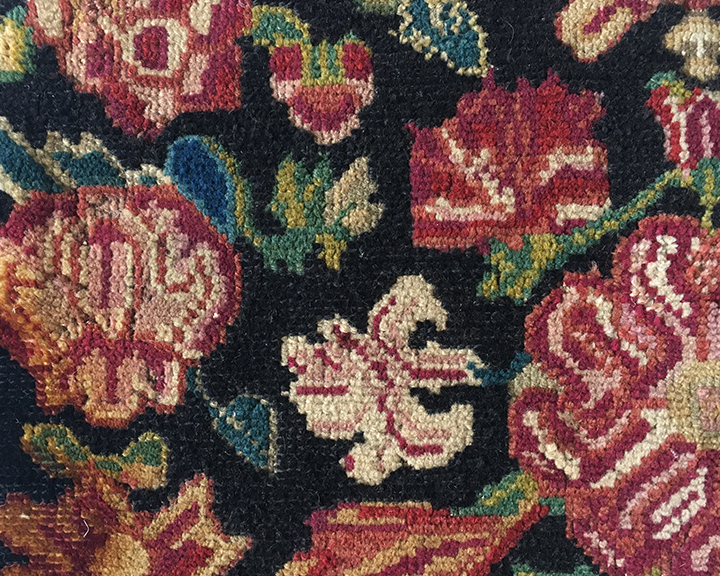 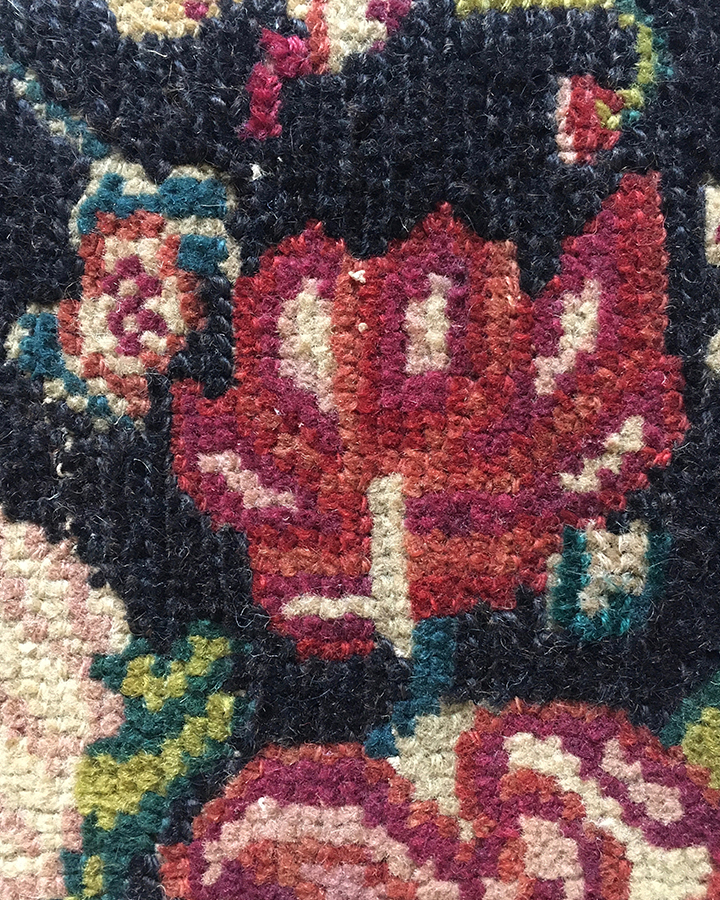 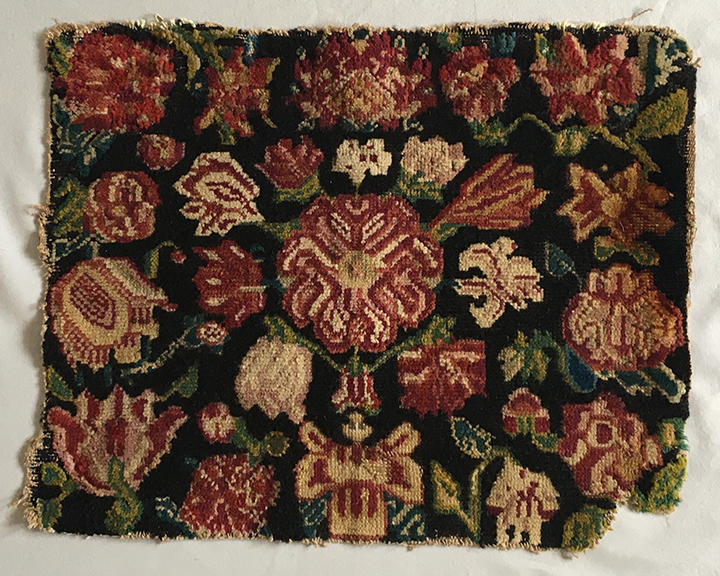 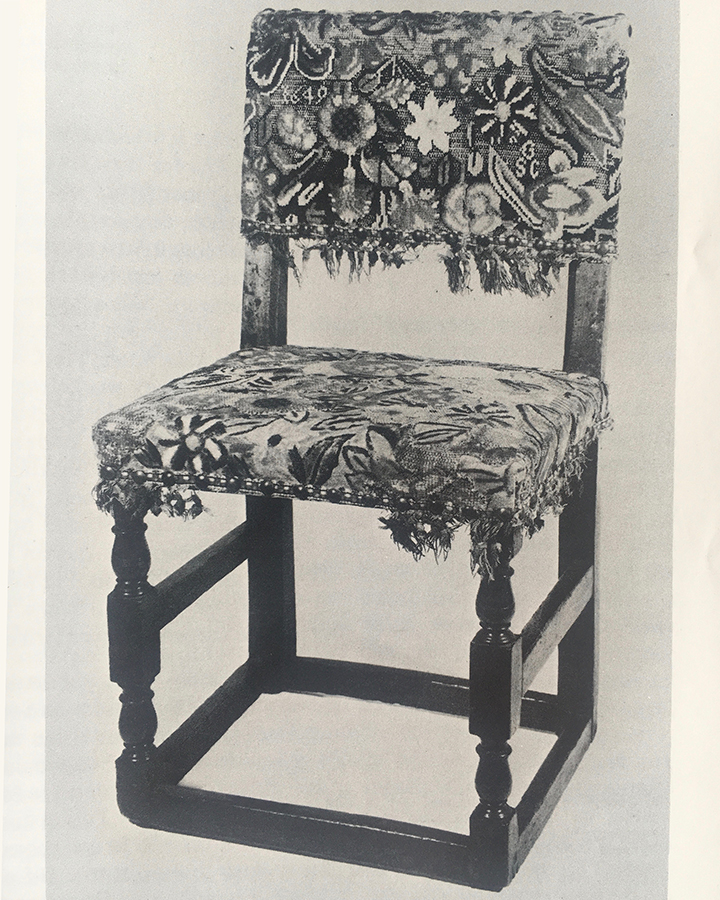 Turkeywork was popular thoughout the seventeenth century. Our pieces dates from Charles IIs reign (1660-1685). In wonderful unfaded colours with bold stylised design. The shape indicates they were chair seat coverings. They are strong enough for upholstery.

Imports of luxury woven carpets from the Levant in the Near East prompted the English to copy the technique. Double strands of wool were passed through a coarse canvas backing and knotted, the surface cut to create a sculpted pile effect. This created a hard wearing, thick, colourful and inexpensive covering for chairs, stools, table carpets, cushions and wall hangings.  Usually the work was done by professional males, but women out workers were also employed. Sometimes amateur ladies would produce the work for their own furnishings.  Norwich, Norfolk, England  was a the main centre for production, but it is also thought that small workshops were set up in London.  Designs were rather formal and usually of flowerheads. The angular design was a feature of Turkish, Persian and Eastern rugs.

This type of upholstery was used for Farthingale chairs, which mark an important stage in the development of upholstered seating in Britain. Originally called 'Back Stools' they were armless to accomodate ladies' wide skirts (farthingales) worn during the sixteenth and seventeenth centuries. The chair illlustrated is from the V & A collection with 1649 worked into the turkeywork design.. From around 1615-1670  these chairs were by far the commonest type of relatively comfortable chair, in what today we would call middle and upper-class homes.* By the late 17th century caning was popular for chairs and Turkeywork fell out of favour.

Each with a large central stylised rose surrounded by tulip, crocus, iris and flowerheads, in crimson, red, orange, pink, natural, blue, dark and acid green on a black ground, tufted in wools.

Unfaded and in remarkable condition.  Very few of these panels exist, because often the black ground has corroded due to the effect of iron in the dye. This is the reason why so many sixteenth and seventeenth century needleworks have a threadbare appearance. There is the odd minute area where the wool thread is missing and you can see the canvas ground, but really it is nothing. When you turn the panels over the lower left and right hand corners have a patch 3 1/2 long x 1 1/4 wide. These originally fitted round a chair leg.  From the right side this is diffcult to detect with very good conservation work.  Photos of course available.

There are examples in many UK and American museums.

English Domestic Needlework by Therle Hughes. There are numerous references to Turkeywork in the book, which if you have not read it is a very informtive read.