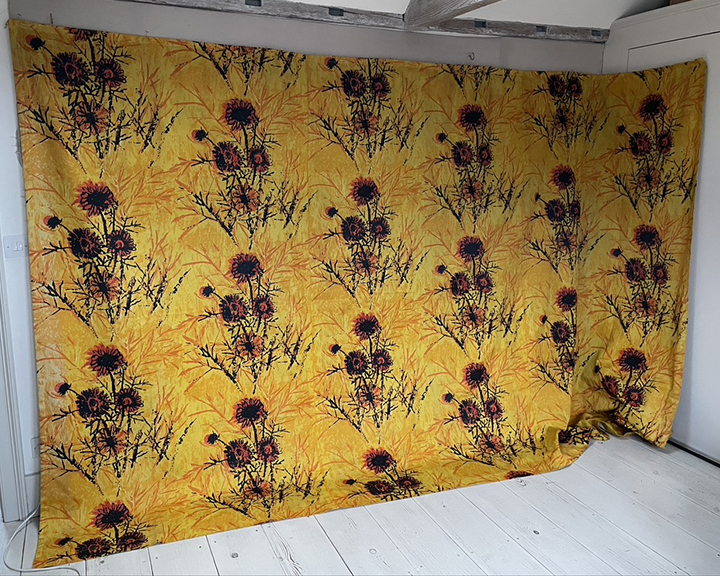 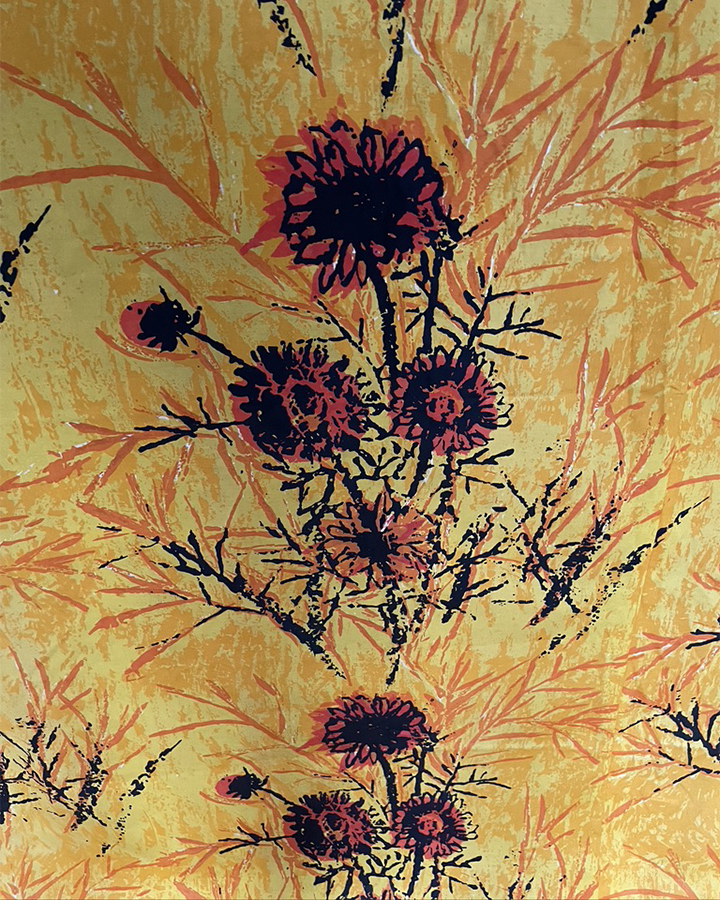 Althea Marjorie McNish (1924-2020) was the first Afro Caribbean woman to gain international prominence in the British textile world, both for her furnishing and dress designs. Althea said she saw life "through a tropical eye" and most of her designs are based on nature, though some use abstract and occasionally geometric themes.

Born in the Port of Spain, Trinidad and descended from the Merikin settlers (Afro American slaves) who had fought for the British in 1818*. Her father was a writer, teacher and publisher, Joseph Claude McNish and her mother Margaret, a dressmaker. By the age of 16 Althea exhibited at the Trinidad Art society and later worked an an entomological illustrator for the British colonial government. "I had to go into the field and do detailed drawings of insects to help in the sugar and cocoa pest control programme". When she was 18 her father had already moved to London, which probably prompted her to apply for, and win a scholarship to study architecture at the Architectural Association. Moving with her mother to London, she had a change of heart and, instead of reading architecture chose to join a print studies course at the London School of Printing and Graphic Arts, now the London College of Communication. She moved to the Central School of Art & Design, now Central St Martin's, where her tutor was sculptor Eduardo Paolozzi. He encouraged her to concentrate on designing and screen printing textiles. Postgraduate studies at the Royal College of Art and a career as a freelance designer followed.

The day after her graduation in 1958, Althea approached Liberty's with her portfolio, who immediately commisioned a range of furnishing fabircs, with a strong tropical feel. "As far as possible, the richness and the vibrancy of colour must remain". She went on to supply Heals, eight designs for Hull Traders and in 1960 further designs for Cavendish Textiles. She produced dress abrics for Zika Ascher, who supplied French fashion houses, and was regularly featured in glossy fashion magazines. Cardin, Dior, Schiaparelli, Givenchy and Lanvin became Althea's clients. She designed laminate murals for the restaurants on ocean liner SS Oriana (1959), and a 'Bachelor Girl's Room' for the Ideal Home exhibition in London (1966). She was also commissioned to produce velvet hangings for British Rail's London office at Euston station (1969) and a banner for London's Design Centre (1981).

Althea retained an artistic connection to the West Indies and was a founding member of the Caribbean Artists Movement (1966-72). She designed laminate murals for the interior of the Port of Spain General Hospital as well as fabric for Queen Elizabeth's official wardrobe, during her 1966 visit to Trinidad and Tobago.

Her work was displayed in exhibitions at the Whitworth, Manchester, and in London at the Victoria & Albert Museum, the Commononwealth Institute (1961), the Hockney Gallery (1997) Somerset House (2019) and the MODA -The Mueum of Domestic Architecture. In America at the Cooper Hewitt and the Philadelphia Museum of Art. Transforming the Crown: African, Asian & Caribbean Artists in Britain 1966-1996 was held at the Caribbean Cultural Center. Exhibitions also at The Studio Museum in Harlem, and the Bronx Museum of the Arts, both New York. In 2003 she exhibited Althea McNish: My World of Colour: the international work and inspirations of a Black British Trinidadian textile designer. Ohio University, Athens, USA. There were also group exhibitions in Australia, USA, UK and France.

Althea was vice-president and fellow of the Chartered Society of Designers, and a trustee of the UK Design Council. She was awarded the Chaconia gold medal in Trinidad and an honorary doctorate in fine art in 2006 from the University of Trinidad and Tobago, whose students she mentored.

These curtains were sold by the daughter of Elizabeth June Varley (1938 - 2020) born in Jarrow, Tyne and Wear in North East England.  From an early age, she wanted to prove her academic mettle, but her father, a disciplinarian and police officer, didn’t agree. Elizabeth moved to London in the early sixties met and married John White, an accountant for the Commonwealth Development Corporation. The couple moved to Africa and lived in Kenya and Dar es Salaam. Returning to London, they lived in Putney. This is when Elizabeth bought the curtains, her taste influenced by living in Africa. Their home was furnished with high-end, classic pieces. After the couple divorced in 1971, Elizabeth returned to Newcastle with her three children moving to Belle Vue Avenue in Gosforth, Newcastle upon Tyne. Her daughter, Antonia said: The curtains were hung in the front sitting room of our house. The whole room was very African in decor although it had a white carpet - a huge risk when you have three children!  Elizabeth trained to be a teacher and eventually realised her academic goals, earning a master’s degree in 1989.

Each curtain made up of three widths, each approximately 46 in; 1.17 m wide + 1 in; 2.5 cm turnings. The selvedges have been removed during making. The seams were then beautifully bound with a tape. Unlined. All machine stitched.

It is quite difficult to say what the repeat is, because the large flower design is staggered each side of the length. There are 6 full repeats on the left and right hand sides. I believe it is 26 in; 66 cm.

Considering these were hung and the vendor's mothers home, they are in very good condition. The selvedges were removed when the curtains were made. There is very slight fading to the outer edge of both curtains, but so slight hardly noticeable.

Althea Mcnish's textiles can be seen at the Harris Museum, Preston, Lancashire; the Royal Scottish Museum, Edinburgh; MODA - Museum of Domestic Architecture and the V & A London.