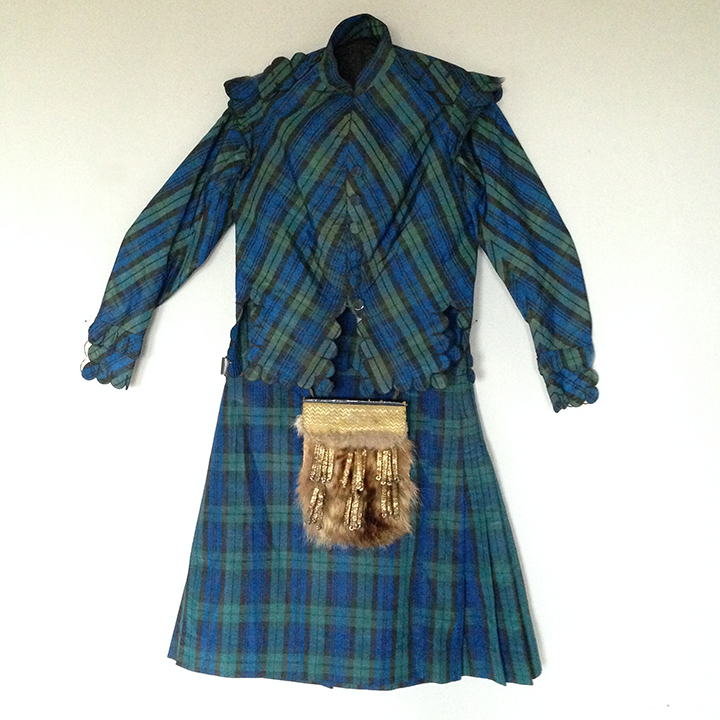 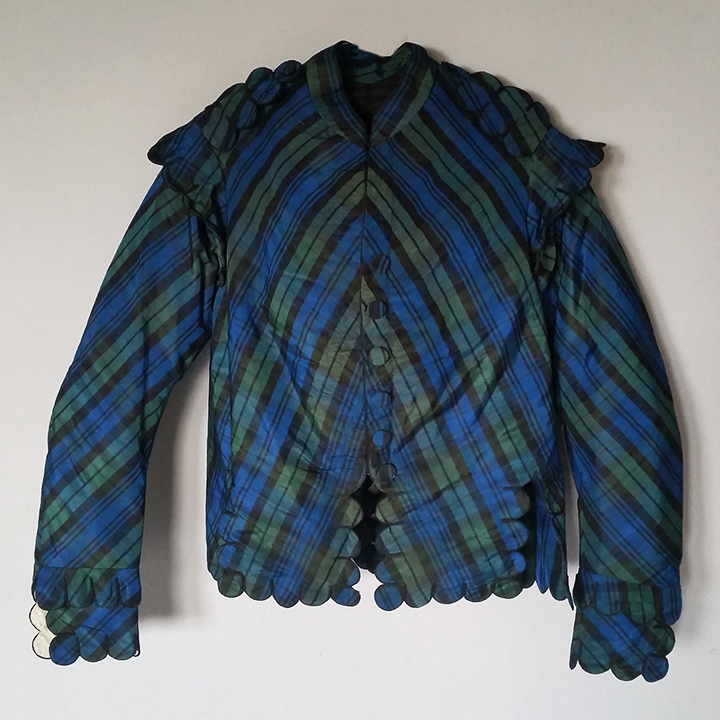 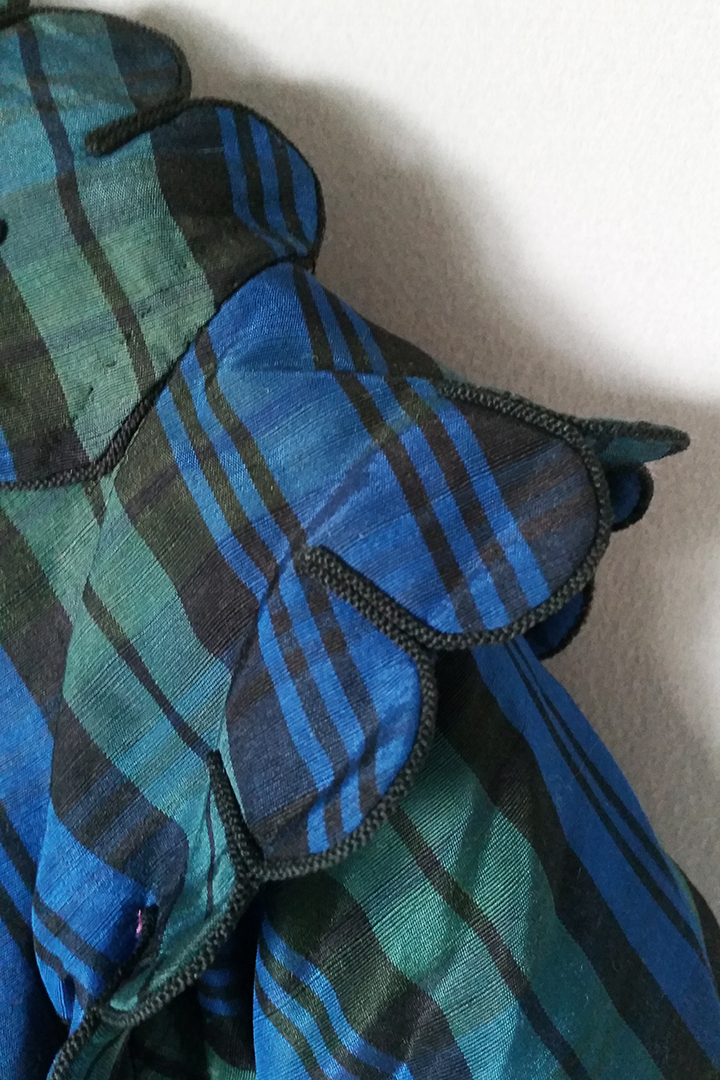 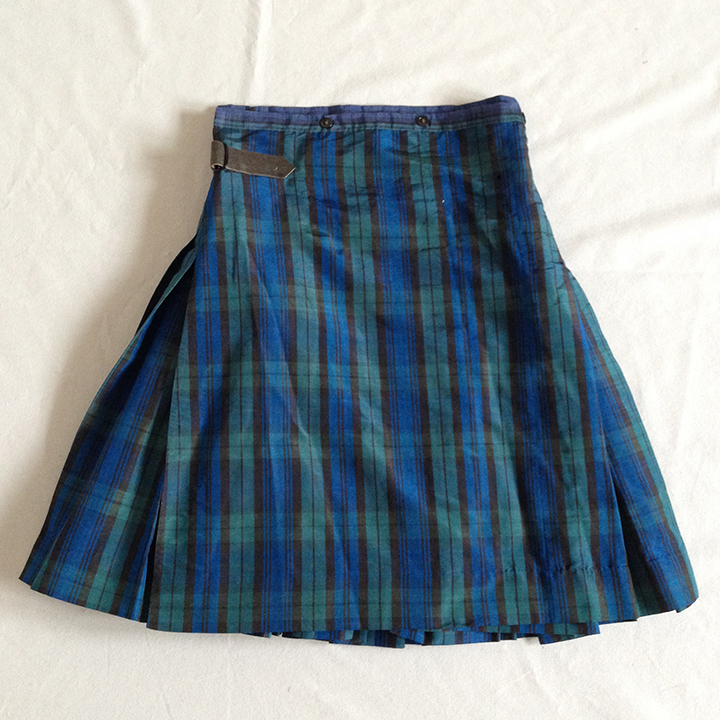 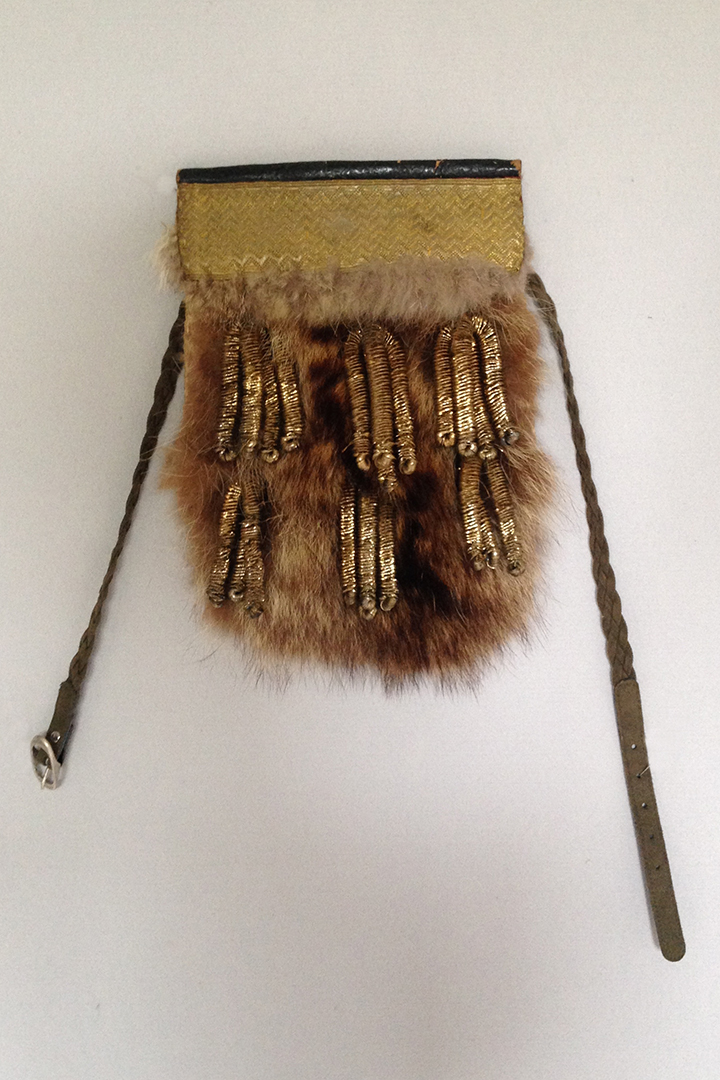 This professionally made Black Watch silk and worsted wool tartan fancy dress is hand stitched and beautifully made. The vendor says there was a note with the oufit:  "Highland costume worn by John Campbell, 2nd Marquess of Breadalbane (1796-1862) at the fancy dress ball given by the Queen on 21 June 1851."

Both the tartan fancy dress and the beautiful woman's dress, to be found on my website in DRESS - 1800-1830, were inherited by the vendor from his mother who sent me the following additional information about the family: "My mother inherited some chattles from her father (my grandfather) who had lived at Langton for about 6 years after the First War.  I inherited these clothes with note inside the box, about them being worn at Queen Victoria's Ball.  I am afraid I don't know any more than that.  It did say on the note that Lady Breadalbane (Eliza Baillie of Mellerstain) had worn the Rose Bud Dress." 1

George IVs state visit to Scotland in 1822, his "Scottish jaunt" when he wore a tartan kilt, started a fashion for tartan. After this date, tartan and tartan effect fabrics became the fashion for costumes and accessories both in Britain and France.

When Queen Victoria and Prince Albert spent their honeymoon at Taymouth Castle in 1840 it was the climax of their tour. The were given a lavish welcome by The Marquess of Breadalbane who had extravagantly remodelled the interior of the castle for the occasion in a Gothic troubador style, employing decorator J C Crace who used A W Pugin's wallpaper. There were fireworks, bonfires, reels and boating on Loch Tay with Gaelic rowing songs, a Grand Ball and piping at every meal, all enacted by clansmen "plaided and plumed in their tartan array." 2 Ten years later in 1852 Victoria and Albert purchased Balmoral Castle, as the royal residence in Scotland.

When was this outfit worn? There are a number of intriguing possibilities:

a. The vendor said the note with the outfit said it had been worn at a Bal Costumé in July 1851 to celebrate The Great Exhibition of 1851.   The theme of the ball was the Restoration period with costumes copied or inspired by the period of Charles II, a celebration of the restoration of the monarchy after Oliver Cromwell's interregnum. There is an 1851 engraving of the Restoration Ball in The Illustrated London News which states: " Her Majesty Queen Victoria's costume ball at Buckingham Palace, London, UK: Costumes worn by the Marchioness of Breadalbane, Lord Feversham, Lady Ashburton..." The tartan outfit is not elaborate enough or of the right style to have been worn with his wife's gown. 4.

The Morning Post (London), 16 June, 1851, p. 5 report on the Ball. The Marquess of Breadalbane "wore a magnificent Highland costume of green velvet, beautifully ornamented in gold.  Her Ladyship wore a dress of the fashion of King Louis XIV. Dress and train of blue Gothic moire ......."  5.  This also throws into doubt the note accompanying the outfit.

b. The other possibility is that the outfit was worn for the May 1842 Plantagent Ball or Bal Masque held by Queen Victoria, intending to boost the declining London Spitalfields silk industry. The guests were requested to wear accurate historical costume of the period or country or national dress, made of Spitalfields silk. There are prints of the Ball with men wearing tartan outfits., but nothing like ours.

"A Grand Ball was held at Her Majesty's Theatre for the benefit of the Spitalfield weavers. The ball raised money not only to give temporary relief to the weavers, but to contribute towards a fund for the erection of a school in which their children may be instructed in the art of design. We hope for the sake of the Spitalfields weavers, that both the purposes may be accomplished through the festivities of thursday night. This magnificent affair in which charity and amusment were blended, came off on thursday night with great eclat. ...elegantly fitted up and decorated for the occasion with a splendid pavilion erected ...... for the accomodation of her Majesty.... The assembly was numerous and the dresses most superb, although very few fancy costumes were worn".......5

c. This fancy dress might also have been worn for one of the many balls that the Breadalbane's gave or attended at Taymouth Castle or their London residence in Park Lane or elsewhere. If the outfit is thought to be earlier, then the Eglinton Tournament of 1839 for which Gothic and Medieval style ancient costume was worn.

d. Of course it may also have been worn at the ball for Queen Victoria and Prince Albert 's honeymoon visit in 1840.

From the portrait of John Campbell he appears to be a slight man and this outfit would have been worn by him, if we are dating it to 1840,  when he was about 46. The sizing seems to be correct for someone of this stature. 7

All Campbell tartans are based upon the Black Watch tartan. The tartan was used, and is in current use, by several military units throughout the Commonwealth. This tartan may be worn by Campbells of the Breadalbane, or Glenorchy branches.

Tartan specialist Peter Macdonald who has seen the outfit, kindly gave me the following information. The pleating of the kilt which is similar to military pleating is pleated to stripe. The japaned buckle is a type used on military uniforms. The cotton ties in kilts were used up to 1830s, but because this kilt is silk maybe they were retained slightly after this period. After 1818 tartan on the bias was introduced.

Two women's tartan silk stoles were purchased with the tartan outfit. These are of the Campbell clan and have the addition of the yellow grid over the blue, green and black of the main tartan.

The jacket is in blue, green and black tartan in a finely ribbed silk is bias cut with a small collar and front opening, two black hooks and eyes above six covered buttons, all above a scalloped hem, edged with black cord, extending round to the front flaps, the back similar, large epaulettes similar scalloped, the sleeves with scalloped epaulettes, the cuffs with a double scallop, the bodice sleeves are lined with a ivory silk tafetta, the back and sides with a black twill weave silky type fabric, only the sides have been interlined and are quilted, the front does not have the interlining, all hand stitched.

The kilt with blue, green and black stripes and check, plain straight front, black buttons to the waistband, the sides and back pleated with 28 knife pleats, the right hand side caught with a leather strap and japaned metal buckle, opening to reveal a flap, the inside back lined with a panel of similar tartan as is the underside of the strap, black cotton ties for fastening.+

The sporran with the flap in leather above soft wolf? fur edging a gold woven band with zig zag design, the pocket lined with chamois leather, the pocket front of coarser but soft fur, perhaps deer, with gold wire curled springs, the back of leather.

Jacket. Very very good. Very slight discolouration to underarm area. There is a group of  four pinhead size holes to the back, all in a little group.

Kilt:  One hole to the the kilt's left hand side (the size of the end of a pencil). A few pinprick holes to the the underflap, but you can only see these when you hold the kilt to the light.

Sporran: Very good condition. A little wear to the top leather strip and perhaps a little fur missing. The strap to secure the sporran round the body is missing.

2.  My thanks to Jenny Lister of Textile Department for pointing out the Pugin wallpaper used at Taymouth Castle, a sample now in the  V & A.   See:  Encyclopedia of Interior Design by Joanna Banham.

4. The Illustrated London News. May 11-Dec 31, 1842.  Visit of Queen Victoria and Prince Albert to Taymouth on 28 May, 1842. It mentions their departure from the castle in the royal barge which had cushions covered in the Breadalbane tartan embroidered with the Breadalbane arms, overhead a canopy of Breadalbane spun-silk tartan. My thanks to Edwina Ehrman, curator of costumes at V & A museum for pointing this out. If anyone knows what spun-silk tartan is do please get in touch.

There are a few portraits of John Campbell, 2nd Marquess of Breadalbane

Portrait as an older man by George Hayter. Unknown whereabouts.

Mezzotint by Edward Burton in Scottish National Portrait Gallery when he was 50. https://www.nationalgalleries.org/art-and-artists/25362/john-campbell-2nd-marquess-breadalbane-1796-1862-statesman

I can find no portraits of Elizabeth or Eliza his wife.

I am indebited to tartan specialist Peter Macdonald for his knowledgable assistance on the outfit. www.scottishtartans.co.uk

The Scottish Clans and their Tartans 1891 by W & AK Johnston p 7,8,9,10 gives family history and shows the tartan. It states that John Campbell, 2nd Earl of Breadalbane's (1796-1862) ancestor, Sir Robert Campbell was loyal to Charles II.

The Dictionary of National Biography

www.scotlandmag.com.issue 51 - available at BL on microfiche. Difficult to read.

www.scotweb.co.uk - available at BL on microfiche. Difficult to read.

Son of Lieutenant-General John Campbell, 1st Marquess of Breadalbane, and Mary Turner Gavin, daughter of David Gavin. The 2nd Marquess became a member of Parliament for Okehampton from 1820-1826 and for Perthshire from 1832-34. A freemason, Breadalbane was Grand Master of the Grand Lodge of Scotland between 1824 and 1826. Elected a Fellow of the Royal Society in 1834, and made a Knight of the Thistle in 1838. The following year he was appointed Lord Lieutenant of Argylshire  a post he held until his death. He was a supporter of the Free Church of Scotland during the disruption in the 1840s. Breadalbane was also Rector of the University of Glasgow 1840-42 and of Marischal College, Aberdeen 1843 and 1845. President of the Society of Antiquaries 1844-62 and Lord Chamberlain of the Household from Jan 1853 - Feb 1858. Governor of the Bank of Scotland 1861- 62 and In 1861 he was sent on a special diplomatic mission to Berlin for the investiture of King William I in the Order of the Garter. He was appointed a Knight of the Order of the Black Eagle of Prussia in the same year. **** He married Elizabeth Baillie of Mellerstain (1803-1861) in 1821 when he was 25.  Eliza, as she was known, was amiable and a great beauty and was a lady in waiting to Queen Victoria from Jan-July 1839.

The Campbells of Glenorchy and Breadalbane, one of the most powerful families in Scottish history, lived at Taymouth Castle, Kenmore, Perthshire, Scotland.  Originally built in 1552 as Balloch Castle, but demolished in 1806 by the first Marquess of Breadalbane, John Campbell. It was later rebuilt as Taymouth Castle, part castle and part country mansion.

1 - This is a continuation of the e mail the vendor sent me: "The 5th Earl and  2nd Marquis of Breadalbane went to Langton House after he sold Taymouth (I think) , the property came through the Gavin family. First Marquis married Mary Gavin (of Langton).    My Grandfather was Godson of Magdalen Harvey who lived at Langton, so he inherited Langton  and its contents at the end of the First War.  The Marquis of Breadalbane had no children), he had two sisters Lady Mary who married Duke of Buckingham and Lady Elizabeth  who married Sir John Pringle of Stichill.  They had two daughters, Mary and Magdelen.  Neither of them had children".