For Silken Fabrics Rich and Rare
What Citie can with Leek Compare? *

During the 1870’s, societies grew up throughout Britain to teach Art Needlework. This was a reaction against the repetitive and unskilled embroidery called Berlin woolwork which had been immensely popular since the 1830’s amongst leisured ladies. These societies aim was to improve the design and standard of embroidery, as well as to supply suitable employment for poor gentlefolk or women who had fallen on hard times and needed to earn a living.

In 1879 The Leek Embroidery Society was established by Elizabeth Wardle in Leek, Staffordshire. Elizabeth and her friends had been working on large, church embroideries for twelve years prior to her establishing the Society, and were well known for the originality and excellence of their work. Some women were employed and paid a salary, whilst others paid for embroidery tuition. Originally the work was undertaken in workers houses but gradually the demand was so great that a property adjacent to Elizabeth’s own house were taken as a schoolroom, workshop and commercial outlet, selling both materials and kits.

Elisabeth’s husband, Thomas Wardle was a silk importer, dyer and printer, as well as a friend and collaborator of William Morris. Together they developed a range of natural dyes which could be used on the tussor silks, both skeins and fabrics, which Wardle imported from India. The natural beige tussor silk ground fabric had been originally imported from India by Thomas' father Joshua . He was unable to discover the secret of dyeing the natural tussor silk. Thomas continued his father's dyeing experiments using vegetable and mineral dyes, and in 1877 made a breakthrough by dyeing the silk to any shade required. The slubs or imperfections produced in the weaving process, due to poor reeling by the villagers in India, were also eliminated with modern reeling techniques. 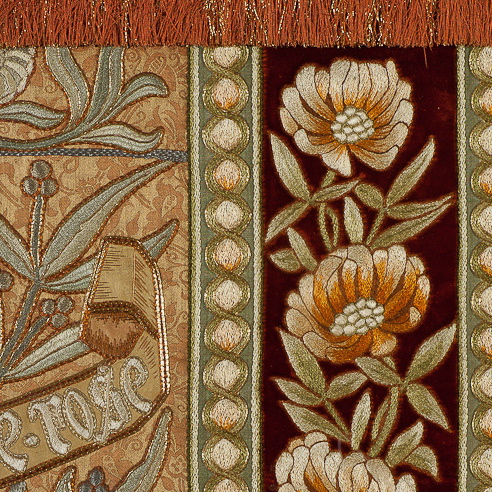 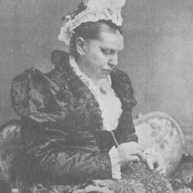 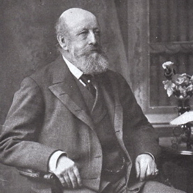