Edmund called his firm after the old name for Bury St Edmunds where his family originated.  He established the firm in the Arts and Crafts artist designer tradition calling himself an ‘art worker’. He advertised his firm as selling ‘altar frontals, dorsals, vestments and all textiles, designed and woven on hand looms to special order.’ The business flourished, and with Dorothea’s continued help, employed four or five men including a master weaver, who had probably been trained in silk weaving in Spitalfields, London. The firm took commissions and produced expensive silks often woven with gold or silver thread.

St Edmundsbury were known mainly for their ecclesiastical weaving, but also carried out secular work. Queen Alexandra ordered an altar frontal ‘The Dove Cross’ for the private chapel at Windsor, red silk hangings for the private chapel at Buckingham Palace as well as some cream wool and silk for her dresses.  A full frontal for St Paul’s Cathedral was also completed in 1902, shwoing the firm was well established very quickly. The same year Edmund sent a piece of silk to Joseph Chamberlain the prime minister, ‘as a token of respect and appreciation for what he was doing for the British Empire’, but also to draw his attention to the dreadful state of the silk weaving industry. **

The firm’s textiles were exhibited at national and international exhibitions and frequently received awards for their technical excellence. At the 1904 St Louis International Exhibition they won a silver medal for decorative textiles. Edmund regularly exhibited at the Arts and Craft Society exhibitions. The company won two gold cross awards at the Home Arts and Industries Association. It is said that the company wove Haslemere’s first Suffragette banner in 1907.* In 1913 at the Ghent International Exhibition, Walter Crane (in his introduction) made a point of referring to Edmund’s efforts towards the revival of hand loom weaving.  The best quality yarns were used, often with gold, silver, aluminium and copper threads, making commissions expensive. Edmund's Golden Dawn experience influenced him for life as an artist, with designs of the period showing astrological signs.

Although the business obtained many commissions, draw loom weaving was time consuming and not viable as a business. Edmund realised that in order to continue the business he needed to be more commercially viable and he must use power looms.

In 1908 the firm moved to to the first Garden City in Letchworth, Hertfordshire, which had attracted many radicals, adult learning societies, women Liberals, theosophists, vegetarians and cyclists,   Edmund and Dorothea were no doubt attracted to living amongst like-minded liberal people.  Edmund designed his own weaving works in Ridge Road and home in Sollershott West, with the assistance of Barry Parker, one of the Garden City’s architects. Edmund was attracted to the new town where ground rents were low, rates reasonable and where he could rent a space large enough to accommodate power and hand looms. There was good housing for the workforce and he gave his workers paid holidays, an unusual practice at the time. Edmund and his family became fully involved in the Garden City’s social life, and were enthusiastic members of the musical and theatrical groups.  His second son Alec, who also studied art and design, joined his father in the firm and worked with him from 1919-27. With his wife Margaret, a teacher, he established a Morris dancing group in the town. Edmund’s eldest son Ralph became a priest.

On their move to Letchworth, Edmund continued to use expensive silk tissues for special commissions, but expanded the range of fabrics using cheaper materials and power looms.  Secular as well as ecclesiastical designs were still produced. Cloth was woven for Sir Herbert Beerbohm Tree’s production of Shakespeare’s ‘Anthony & Cleopatra’. 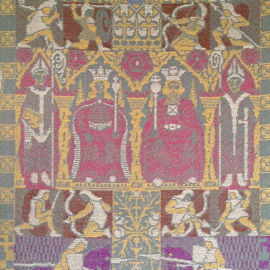 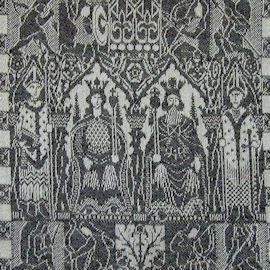 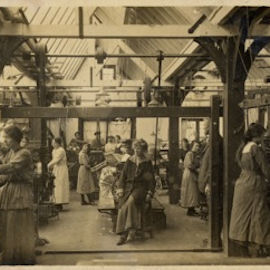