Originally the word crewel (mostly known at the time as curl, croyl or crewel) referred only to the type of wool, twisted two-ply worsted* yarn, which would originally have been spun and dyed in the home. The ground fabric was homespun linen with a diagonal twill weave, linen warps (verticals) on cotton wefts (horizontals). Looms at this time were narrow, an average loom width was 19 inches or 49 cm .

Colours were derived from vegetable and mineral dyes, but many were not fast due to mordants or fixing agents still to be discovered. Green was achieved by painting a yellow dye, such as one made from onion skins or saffron, over a blue, from the plant woad. Due to oxidation the yellow has often disappeared leaving the blue. Many crewel work hangings we see today have blue leaves, which had originally been green.

Professional embroiderers were men, who had been apprenticed for seven years as young boys to craft guilds. The embroidery guilds undertook work for church furnishing and garments, as well as Court regalia. After the Reformation**, the demand for ecclesiastical embroidery was greatly reduced with the professional embroiderer touring the country as freelance journeymen, to work on secular domestic work.  They stayed at gentry houses to draw patterns on cloth for furnishing and clothes, and gave advice on colours and stitches. On estates where this luxury could not be afforded, a drawing master or anyone in the employ of the estate who could draw, was pressed into service. For those living in or near cities haberdashers offered the service of pattern drawing, as well as selling needles, thimbles and crewel wools. There is reference in 1731 to an Abraham Pinhorn who drew ‘all sorts of Patterns for Needlework, French Quilting, Embroidery, Cross and Tent Stitch’ and sold ‘shades of Silk and Worsted’ for working them.*** The ladies of the house would then embroider the pattern in a variety of stitches including stem, back, split, satin, basket, fishbone, vandyke, cross, petal, French and bullion knots. The pattern could be achieved fairly quickly with thick wools, the background being left natural. 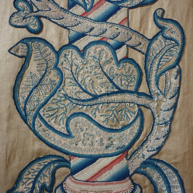 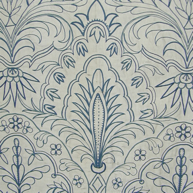 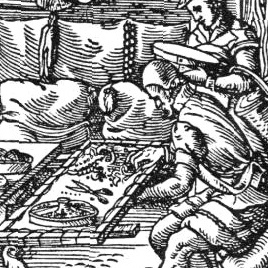