Crewel work hangings were sometimes worked by professionals, but it was amateur needlewomen who embroidered for their own pleasure and to furnish their homes. Needlework and painting were seen as an essential part of noble women’s accomplishments. Girls were taught to embroider at an early age. In 1688 A Guide to Ladies, Gentlewoman & Maids stated that needlework ‘is both needfull and pleasant, and is commendable in any woman, for it is time well spent for both profit and delight.’ *** Servant girls would be taught plain sewing in order to make household linen and underwear, but anyone who could work a needle might be employed to assist the lady of the house to work her crewel work hangings.

The coiling monochrome patterns called blackwork, which can be seen on men and women’s clothes in the sixteenth century were one of the influences for crewel work. As well as black on the natural linen ground most commonly seen, red or a bright green was also used. Flemish Verdure tapestries with their huge curling acanthus leaves were another influence. Venetian needlepoint lace with its variety of leaf fillings can be seen reflected in the leaves of many crewel hangings. Italian and French Baroque silks with their large leaf designs were also influential, but the greatest influence towards the end of the 17th century came from the Orient, from China and India.

The East India Company, which was granted a Charter by Elizabeth I in 1601, sent ships laden with cargoes of wool, metal and money, to the East. Their cargoes were traded in India for tea, porcelain, jewels and spices. Towards the end of the century printed and painted cloths called palampores from the Coromondal Coast in Gujerat were also being brought back to Britain. The word palampore comes from the Hindustani word Palangposh meaning bedcover, but they were also used for wall and bed hangings. The ancient Tree of Life design was of a semi-stylised tree emerging from a hilly outcrop covering the hanging. It derived from Persian and Indo Persian painting. On their journey to India the ships might encounter a Chinese junk, when wool was traded for embroidered silks. The Chinese embroideries in turn might be sent to India where they were used for inspiration for textile designs and in particular the palampores. 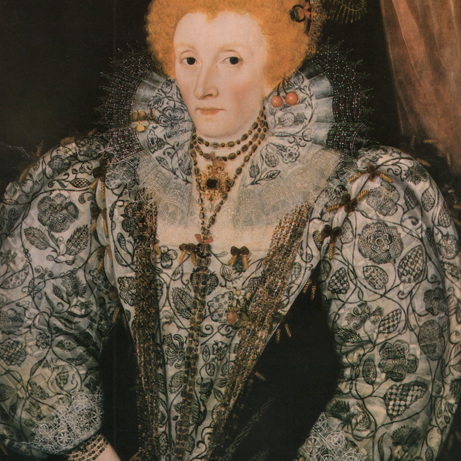 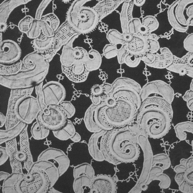 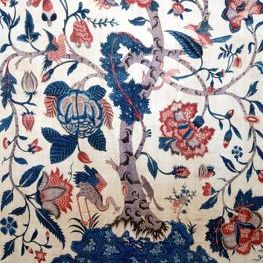