Muriel Rose was the granddaughter of draper, Matthew Rose who established Matthew Rose & Sons, 335 Mare Street, Hackney, East London, E8 in 1854.  Matthew Rose’s son, Edwin developed the business into Hackney’s leading department store, selling furniture and household goods, occupying 347-357 Mare Street and 2-18 Amhurst Road. Hackney by the turn of the 20th century was a vibrant and fashionable shopping district.  In 1936 Marks & Spencer’s purchased the store and later rebuilt it, and continue to have a shop there today.

Little is known about Muriel’s early life. We know her grandparent Matthew Rose was born in Lamberhurst, Kent, and listed as a draper in the 1871 census.  His wife Ann, came from Lewes, West Sussex, and they were living at 8 Pembury Road, Hackney with three children, Eve aged 15, Edwin 11 and Albert 5. They employed a servant Emily Green.

In the 1901 census, Edwin is married to Florence Keen with three children, Stewart, Geoffrey and Muriel Florence Keen, aged 3, born on 5 November 1897.  They lived at Lynhurst, Mornington Road, Woodford Wells, Essex. The 1911 census, when Muriel Rose was 13 years of age, tells us the family employed a cook, housemaid and nurse.

Muriel age 20, worked from 1917 to 1920 as a member of the Voluntary Aid Detachment (VAD), a voluntary unit of civilians, which provided nursing care for military personnel in the United Kingdom and abroad during World War I.

By 1939 Muriel was living at 129 Old Church Street, Chelsea and is listed as an Art Dealer. During the 1970s Muriel moved to 51 West Street, Coggeshall, Essex.

Soon after the start of World War II, in 1940 the Little Gallery closed its doors, there being no enthusiasm for purchasing crafts. Muriel and Bernard Leach ame up with the idea of taking an exhibition of British craftwork to America.  Muriel was asked by the British Council to join them in establishing a major craft exhibition, The Exhibition of Modern British Crafts, to be sent to America and Canada to promote British craft.  Muriel became ‘Secretary of the British Crafts Exhibition’, reporting to a committee chaired by Sir Eric Maclagan, director of the Victoria and Albert Museum. The exhibition toured ten American cities and five in Canada from 1942-5, displaying middle class room settings filled with stoneware, porcelain, textiles and silver, opening at the Metropolitan Museum of Art, New York in May 1942. Muriel accompanied the exhibition to USA and Canada.  The British Council had only collected for specific exhibitions, but now decided to form their own collection, to promote the best of British crafts abroad.  Muriel established and curated the collection, in her position as Crafts and Industrial Design Officer, a post she held until her retirement in 1957 (4).

In 1946 Muriel went onto organise another British Council touring exhibition, Exhibition of Rural Handicrafts from Great Britain. Together with the Rural Industries Bureau, the National Federation of Women’s Institutes and the Highland Home Industries, the exhibition toured Australia and New Zealand. (4)

In 1955 she published Artist Potters in England.

As a founding Trustee of the Crafts Study Centre, Farnham, Surrey, she joined the Board (1970 - 6), building up the CSCs craft collection and bequeathing many pieces from her own collection. An exhibition Muriel Rose. A Modern Crafts Legacy was held in 2006.

Muriel bequeathed a large group of textiles by designers such as Barron and Larcher and Ethel Mairet to the West Surrey College of Art and Design, now the University College for the Creative Arts at Farnham, Surrey. These were for the Textile Department’s study and handling collection. 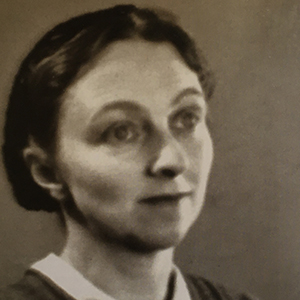 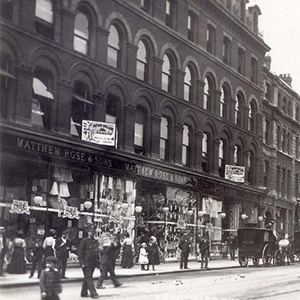 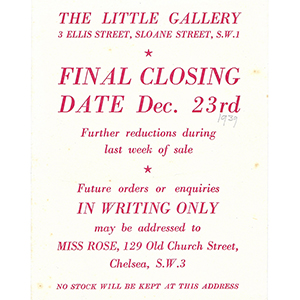