The commission was one of the broadest they had undertaken as it included designing an entire decorative scheme. By now the Furnishing Sub-Committee had recommended that Barron and Larcher should make the final choice of sofa covers and lamps. Walnut standard lamps were made by Eric Sharpe and the lampshades chosen at Lady Colefax’s shop (later Colefax and Fowler) in Mayfair. Other items were bought from Muriel Rose’s Little Gallery at 3 Ellis St, Sloane Street, London SW1. The gallery sold the work of leading British craftsmen and women of the 20th century as well as antique pieces.. Sun blinds for the Combination Room were purchased in a string colour so as not to darken the room.

By August 1933 the first of the curtaining and upholstery was in place. Barron received complimentary comments from Miss Butler and replied we are so very glad the curtains are liked after all your agitation.13 The following week Miss Butler expressed satisfaction with the loose covers. 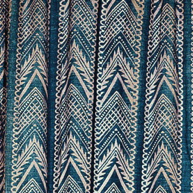 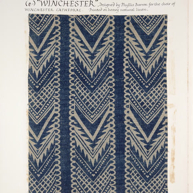 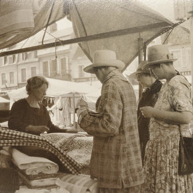 B & L at a French Market