Barron willed her collection to Tanner Robin will know what to do with them17. Robin had been a teacher and then became Inspector of Schools. On his retirement Robin and his wife Heather, both etchers and printmakers, spent many years, cataloguing, researching and cleaning the Barron and Larcher collection and writing their story in two large hand-bound volumes, which contain actual samples of printed and dyed cloths.  Tanner thought Barron and Larcher surely the greatest designers and printers of textiles since Morris.18 Tanner gave the large collection of textiles and books to the Craft Study Centre which he established in Bath at The Holbourne of Menstrie Museum. The Centre has since moved to the University of the Creative Arts in Farnham, Surrey. It has the largest collection of Barron and Larcher’s work.

Robin Tanner ‘s introduction to Barron and Larcher’s memorial exhibition in 1966 at the Royal West of England Academy, beautifully their exceptional partnership:

The thirties were their heydey. Production was lavish. Their garden was packed with treasured plants which often inspired fresh designs. Visitors to the workshops were legion. There were frequent exhibitions. It was indeed a rare blend of the feeling and craftsmanship of two people that produced that great wealth of printed cottons, linens, velvets and silks; and although the peculiar contribution of each is clear yet it is not always easy to distinguish the designs of the one from those of the other. Their work was a revelation at that time and has been a source of wonder ever since; for at its best it has a timeless quality, a peculiar Englishness and rightness exactly fitted for the upholstery, curtains and clothes for which it was designed. Moreover, the stuffs upon which the blocks were printed and the dyes used were so completely and sensitively understood that there was an inevitability about the work: it was like that because it could not have been done in any other way – there was always a perfect harmony between the fibre, the dye and the block. 19

The Combination Room curtains were removed around 1999, their whereabouts unknown and so presumably destroyed. It is not known when the curtains in the Mistress’ room were removed.

In 2009 the Dining Room curtains had begun to show some strains of age, mostly wear and sun damage. I advised Girton to adopt a conservation based scheme but regretably, Miss Butler’s successors decided to move away from the integrity of the 1930s scheme. The reason given was that they were required by law to ensure flame-proofing in these rooms, and that’s not possible following the conservation route. The curtains were replaced with an Enid Marx reproduction linen and the originals sold to me.

The Dining Room curtains remain in a remarkably good state with some damage to the outer edges and some sun damage in the form of vertical stripes They illustrate well the innovative methods of Barron and Larcher and are believed to be the only surviving curtains from their extensive practice, unique survivals of this extraordinary partnership, quintessentially English but also very modern. 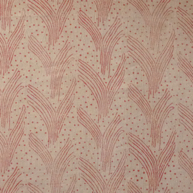 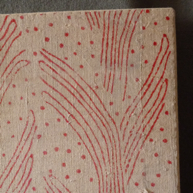