Textiles for domestic use were produced in increasing quantities from the 16th century to make houses more comfortable and colourful. Woven and embroidered wall hangings, carpets, cushions, pillow covers and bed hangings were in demand by the rich and middle classes.

A bed was the most prized possession in a household, a symbol of wealth and rank, its coverings as sumptuous as the owner could afford. Luxury fabrics imported from France and Italy were used on state beds and those of the aristocracy. A newly emerged middle class, whose wealth was founded on trade, were unable to afford expensive imported fabric and furnished their beds with embroidered hangings.

Four-poster beds were fashionable, requiring hangings which, when drawn at night, provided warmth in draughty rooms, protection from peeping eyes and some colour in an otherwise fairly austere interior. A set of bed hangings comprised two curtains either side of the head, made from two-and-a-half to three widths of fabric; two wide curtains at the foot of the bed, each made from five widths of fabric; three narrow top valances and three base valances, and a bedcover.

In the 17th and 18th centuries bed hangings with huge exotic leaves or Tree of Life designs were in fashion. Embroidered by middle-class women using crewel wools on a linen ground. 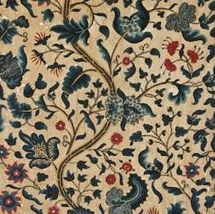 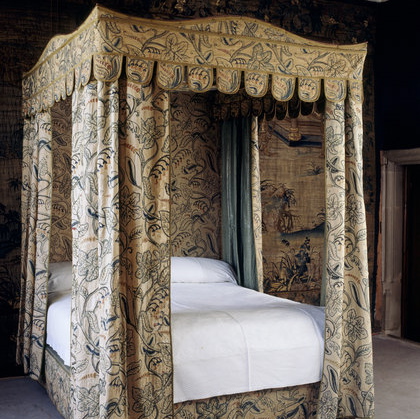 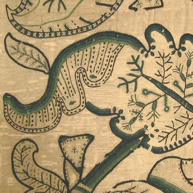