Muriel and Peggy ran a successful business and employed two assistants, the Flint sisters, Lu and Dodie. These girls from a poor background thrived at the Gallery.  Encouraged to discover how the products they sold were made, the girls were sent to the Cotswolds to Barron & Larcher’s studio, to try their hand at block printing fabric, and to the Winchcombe pottery to see how slipware was made (3). In the 1935 diary, it is clear that Muriel and Peggy liked and wanted to help their two assistants. In Mrs Turnbull’s diaries, mentioned below, she writes “Peg and Miss Rose took all the shop assistants to dinner and the theatre.” There is mention in the diaries of Dodie going for a holiday to Harman’s Orchard, Peggy’s home, as well as staying there after an illness.

On discovering that the sisters had not been to the seaside, Muriel and Peggy, paid for them to go on a visit. Their young schoolgirl sister Rose, also helped the family income by delivering parcels on a Wednesday afternoon, a free half day from school. Rose also decorated wrapping papers with potato cuts, which were sold in the gallery on a sale or return basis costing 1s 3d (6p) with Rose received two thirds of the sale price. She also decorated Christmas cellophane boxes with gummed stars (3).

In her book Chelsea Child Rose Gamble mentions that exhibitions of Victorian patchwork quilts, weavings and embroideries were held. She tells us that Muriel travelled extensively and bought simple everyday wares, such as rough toffee-coloured salt glaze pots back from France. Whilst visiting Eastern Europe including Poland and Czechoslovakia, Muriel bought painted angels and horses, woven straw birds and dolls with wooden faces for the shop’s Christmas trade. In Finland she purchased glass and wood kitchenware. On his visits to Japan Bernard Leach sourced ceramics for the Gallery to sell. Most of the items for sale, however, were ordered through wholesalers. Crafts from India, Indonesia and Mexican natural coloured village rugs with bold simple designs were also displayed.  Edward Gardiner sold English furniture made in smooth untreated ash with rush-seated chairs whilst hand quilted items were bought from the Durham and South Wales miners’ wives. Lu and Dodie would be sent to London's East End to buy Chinese celadon bowls for 4 pence (2p), which the Gallery sold for one shilling and sixpence (8p)(2)

The Rural Industries Bureau, set up by The Ministry of Agriculture in 1928, aimed at giving technical advice to small rural-based crafts in depressed areas. It sought to provide employment for women and to promote the revival of cottage industries in the inter-war years of the Depression.  Muriel and Mavis Fitzrandolph were employed to visit the mining areas of Durham and South Wales, with a view to promoting quilting produced by miners’ wives.  To supplement their family’s income, the wives had long been producing and selling hand quilted wholecloth bedcovers (one piece of fabric, not small pieces).  The RIB scheme promoted the craft and encouraged classes to be set up where older women could teach younger ones quilting skills. Muriel and Mavis toured the regions and commissioned the best quilters to produce bed and cot quilts in sateen, poplin or silk, filled with soft lamb’s wool. Bed-jackets, night-dress cases, dressing gowns and cushions were produced as well as tea cosies. Muriel would have been only too aware that however good the quilting, the designs needed to be stylish for a sophisticated market. Quilting designers in the regions would have been engaged to produce desirable patterns. This hugely popular enterprise produced items for sale by RIB’s commercial outlet, Country Industries, but also in 1928 by The Little Gallery. Many orders were taken including Claridges commisioning quilted bedcovers for their Art Deco rooms. The Quilting Industry, printed by The Little Gallery, accompanied the sold item giving a brief history and explaining the Rural Industries Bureau.  Amongst the prices given are those for cot quilts (£1.5s.0d) (£1.25p) and silk cushions (£1.18s.6d) (£1.92p) Tea cosies are not mentioned but were probably of a similar price to a cushion (5) 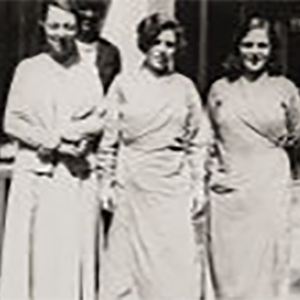 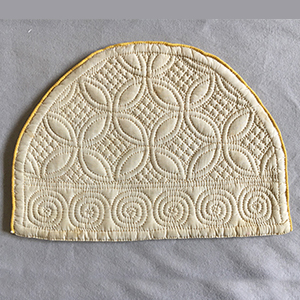