Some of the finest hand loom woven silks in the Britain were produced during the first quarter of the twentieth century by Edmund Arthur Hunter (1866-1937) and his firm St Edmundsbury Weavers, based in Letchworth, Hertfordshire.

Edmund, on leaving school, was expected to join his father’s wine business in Bury St Edmunds, but a legacy enabled him to pursue a career in art and design  After studying art in Munich and London his father Arthur apprenticed him to the Silver Studio in 1884, where he trained as a designer for three years. The Silver Studio in Brook Green, Shepherds Bush, was one of the most influential textile design studios in the Britain, started by Arthur Silver in 1880 which flourished until 1963. Arthur Silver was paid an initial premium of 100 guineas by Edmund’s father, half of which would be repaid to him in instalments over the three year training period, finishing on Edmund’s twenty-first birthday.

In 1896 Edmund married Harriette Dorothea Butler, a student teacher; he was 29 and she 26. They set up home in Gunnersbury, West London.  Edmund and Dorothea, as she called herself, married in an Anglican church and High Church Anglicanism remained the centre of their religious and artistic life.* They had met at the Theosophical Society in Bedford Park, West London. A philosophy which introduced westerners to eastern, mainly Hindu religion and professed to attain a knowledge of God by direct intuition and spiritual ecstasy. There was a widespread interest in psychic pheonemon during this period, both in Europe and America. Membership of these societies would have appeared much less eccentric than today.**

Dorothea, who was born in County Offaly, Ireland and had met William Butler Yeats at the Theosophical Society meetings. They realised that they were distantly related through Keats' Butler grandmother, with his father retaining his mother’s maiden name of Butler. Dorothea felt that her Irish ancestory made her very responsive to Yeats thought working with Yeats on Celtic mythology.  It was probably at these meetings that Dorothea met Edmund.  By the 1890's Yeats had set up another society, the Hemetic Order of the Golden Dawn. This was the study of the occult, magic, metaphysics and paranormal activity with women admitted on an equal basis with men, and became an influential organisation, expanding to Europe and America. Dorothea and Edmund were part of a group interested in developing a specifically Celtic spirituality, the Celtic Mystical Order.* which was a revival of a medieval christian order of mystics. Edmund and Dorothea became key members, Dorothea eventually became an Instructor of Clairvoyance. The Order became distruptive with members taking sides.The Hunter's resigned in 1902, about the time they moved to Haslemere.

Edmund and Dorothea lived in Chiswick, where Edmund would spend many hours drawing flowers in Kew Gardens. By 1898 Edmund was a registered member of the Society of Designers and attended William Morris’s design lectures but little else is known about his early life except he was a proficient boxer.  We do know he felt frustrated at the lack of liaison between the designer and the manufacturer, who would often alter a design without consulting the designer. Their son Ralph was born in 1897 and Alec in 1899.

Edmund and Dorothea moved to Haslemere, Surrey in 1901 attracted by the artistic community  which aimed for " …a true country life where handicrafts and the arts of husbandry shall exercise body and mind and express the relation of man to earth and to the fruits of the earth.' **  The Haslemere Peasant Arts Industry had been started by Godfrey  and Ethel Blount and Joseph and Maude King, having been inspired by those peasant communities in Europe, that still maintained flourishing ‘Peasant Arts’ industries, the Kings and the Blounts developed a number of different craft workshops in Haslemere.  An umbrella organisation for a number of small workshops in weaving, pottery, toy and furniture which revived craft traditions and employed local skilled labour. It flourished until the outbreak of World War One.

Edmund briefly joined Luther Hooper at Haslemere Silk Weavers. Hooper an authority on hand looms and cloth construction. had set up a weaving business in 1901 which produced silk and cotton damasks, brocades, velvets, woven embroideries, tapestries and carpets. Their aim was to start and develop an industry, in which artistic design was combined with better craftsmanship than could be obtained by the use of the power-loom. There was presumably a falling out with Hooper when Edmund declared that Luther was more interested in playing the piano than working on designs. Dorothea assumed the driving force behind Edmund and by borrowing £500 from her widowed sister, helped him set up St Edmundsbury Weaving Works on College Hill in 1902. 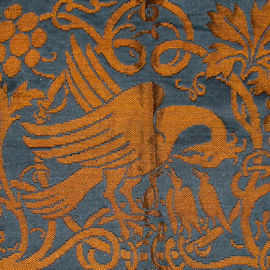 The Pelican in her Piety woven silk 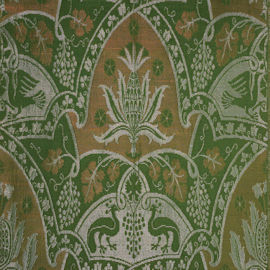 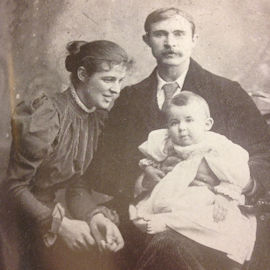