This article came about partly through oral history with a relative of Peggy Turnbull, co-owner of The Little Gallery, who contacted me with items which they inherited and wished to find a home. Amongst the items were eleven small diaries (1930-42) which gave an insight into Peggy’s life. Much has been written about Muriel Rose the dynamic co-owner, who was the artistic inspiration behind the Gallery. It is therefore good to know more about the role of her business partner Peggy Turnbull.

The Little Gallery was in a world of itself...most of the customers became old friends who would sometimes come in for a few minutes for a chat and leave a cake for tea (1)

Muriel Rose (1897-1986) and Margaret (Peggy) Turnbull (1892 -1980) were co-owners of the Little Gallery. The Gallery was curated and managed by the forceful Muriel who, had a great aesthetic eye and was determined to display the best quality crafts in the most attractive setting. She clearly had retail experience through her family business.  Peggy organised the administration and accounts and offered a supportive role. Muriel and Peggy's intention was to enable craftspeople, particularly women, to display and sell their work as painters and sculptors might display theirs in art galleries. During beautifully curated exhibitions artists talked to prospective clients about their techniques, demonstrated their work and took commissions. The Gallery attracted artistic and Bohemian clients, including architect Walter Gropius, society figure Lady Diana Cooper and the actor Charles Laughton who was a frequent visitor while a visit from Queen Mary is also recorded.

Illustrated: A promotional leaflet showing the range of items for sale. Notice the phone number on the leaflet SLOANE 6663. This was designed by Sam Smith. It is thought the Christmas Shopping Notes card and other gallery ephemera, to be seen later, were designed by him. 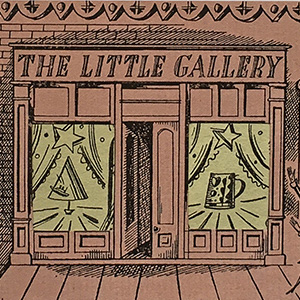 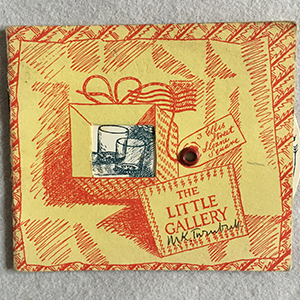 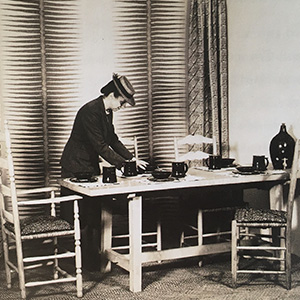