The aim of Cryséde is not power but beauty.

Alec Walker an entrepreneurial businessman and talented artist created Cryséde fabrics, a small experimental silk printing firm in Newlyn, Cornwall in 1920. He produced fun and colourful designs, bought by middle class women, eager for completely new and quirky designs to brighten their appearance after the First World War.  His artist wife Kay designed the dresses and patterns. Walker left behind a legacy of creative and quirky designs.

Alec George Walker (1889-1964) was the youngest of five children of John Henry and Emily Walker. He was privately educated at Epsom College in Surrey. On leaving school he joined his father’s business, Walker & Sons in Mirfield, West Yorkshire, which produced plush and silk for the garment industry. Walker’s apprenticeship took him to each department of the firm,  eventually managing the plush and furnishing department. Attending Huddersfield Technical College one day a week to learn textile production, he found that he had received such a good training in the mill, that he was wasting his time. The head of the college suggested that instead of attending classes he spend his time on the Yorkshire moors studying and drawing vegetation.

In 1912 at the age of twenty three, Walker longed to travel, applied and was accepted at Hawkesbury College of Agriculture in New South Wales, Australia. It is said that to bribe him to stay, his father gave him a rundown silk mill, which had been part of the family business and had exhibited at the Great Exhibition of 1851. Walker quickly transformed the mill and started his business Vigil Silk, producing fashionable spot and striped silks. So successful was he that he was appointed the Yorkshire representative to the recently formed Federation of British Industry.

The same year, Walker met his future wife Kathleen (Kay) Earle (1893-1966)when he advertised for a commercial artist for his new Vigil Silk business. Kay lived and worked in Newlyn, Cornwall, the small town which had become an artists' colony in the 1880s, best known for the Newlyn School of Art.   A local industry had formed, where artists instructed local people in the skills of enamel jewellery, art needlework and repousse metalwork. At her interview in London, Walker was immediately attracted to Kay and her enthusiasm for the artists’ colony. He travelled down to Newlyn that same day with her to see for himself, and stayed two weeks.  He was welcomed by the other artists, liked their lifestyles, found them serious about their work and receptive to new ideas. There were frequent visits over the next few years whilst he was establishing his Yorkshire business, often giving silk and velvet lengths as presents to the young ladies of the group, who made them into fashionable clothes. Encouraged by his new friends to sketch and paint, Walker produced colourful naïve paintings, which he would later turn into textile designs. 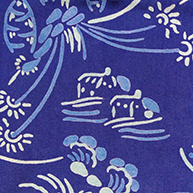 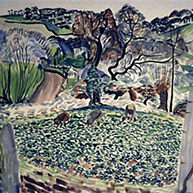 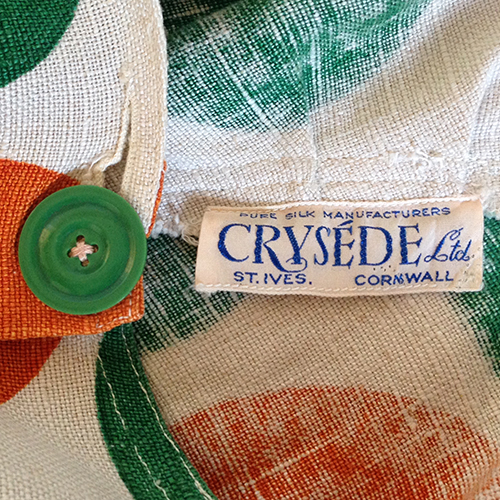