Walker’s interest in art grew and he bought the works of artists who visited Newlyn. He realized he needed to develop the business with some modern avant garde textile designs. In 1923 Walker visited Paris to meet Raoul Dufy with the intention of buying his textile designs. He found he could not afford them, but both Dufy and the sculptor Ossip Zadkine encouraged him to use his own drawings and paintings. Walker was inspired by the Cornish landscape and started to design witty and fun prints, based on his paintings. Raoul’s influence is evident in the small naïve and modern designs produced with small brush strokes. The designs were named after local places.  I say you can take the most simple things in everyday life as did the old masters, and turn it into one of the most beautiful things, merely through a sense of design.**

Local girls were employed and trained to a high standard in the whole process from raw silk production, the bleaching and dyeing processes to hand block discharge printing. After the silk was de-gummed and washed, it was bleached with hydrogen peroxide, then dyed by passing the twisted silk through large wooden troughs or left natural, before being printed. Apple, cherry or sycamore wood was used to make the blocks. Plywood was fixed to an inner layer of soft wood with the grain at right angles. The grain of the wood became exaggerated with the cracks of age and us. Intricately carved to leave just the relief of the pattern, often with brass inlays hammered in for fine lines or details.  A different 15 inch; 38 cm by 12 in; 30 cm block was required for each colour.  Each Cryséde design required up to seven blocks . Colourfast and synthetic dyes, mainly from British supplier were used, but also some from Switzerland and Germany with the colour being driven in by a mallet, thereby gaining a depth which cannot be achieved by machine printing.**

Crepe-de-Chine was the main fabric printed, with georgette and velvet added later. Plain silk retailed at 6/11d a yard and prints were 10/6d. By 1928 the plain dyed silks and made-up goods were known by the trade name ‘Cryséde’, whereas the printed silks were marketed as ‘Cryséde Alec Walker Designs’.

Kay designed the 1920s dresses when each required 10 yards; 9 metres of fabric. She also designed the dress patterns to a high standard and the early advertising material. After the birth of her first daughter in 1921 Kay produced designs only for select clients. She worked freelance as a graphic designer and continued as a portrait painter. London fashion designer and artist, George Criscuolo, was appointed the dress designer. 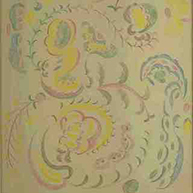 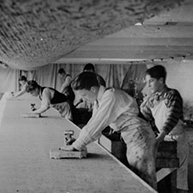 Hand Block Printing in the Works 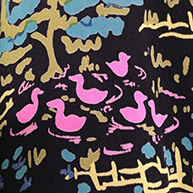